The combustion of food occurs at cytochrome c oxidase

Cytochrome c oxidase represents the enzyme where cell respiration takes place. The oxygen which we inhale is transported via the blood stream to all cells of the body where it is converted into water by a cold combustion process of our food. The reduction of oxygen to water occurs at cytochrome c oxidase (COX), the final enzyme of the respiratory chain housed in the mitochondria. Mitochondria are cell organelles representing the power houses of cells. The cold burning creates an electrochemical potential across the mitochondrial membrane (about 120 mV) by translocating protons from the inside to the outside of the organelle. The electrochemical potential is used by the ATP-synthase for the synthesis of ATP (adenosine triphosphate), the universal energy currency in living cells. In fact most energy consuming reactions in living systems are driven by ATP, including thinking of the brain, working by the muscles, and digestion and metabolism of nutrients. 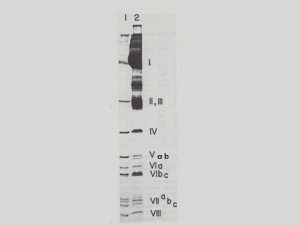 Fig. 1. Mammalian cytochrome c oxidase contains 13 tightly bound protein subunits. This is shown by sodium dodecylsulfate polyacrylamide gel electrophoresis of immunoprecipitated COX from rat liver mitochondria. Mitochondria were dissolved in a buffer containing 5% Triton X-100, 200 mM sodium phosphate, pH 7.2 and immunoprecipitated with an antibody only reactive against COX subunit IV [Merle et al. (1981) Biochim. Biophys. Acta 669, 222-230] (lane 2). In the lower region (subunits IV-VIII) only the subunits of COX are visualized. In lane 1 is shown the COX as isolated by standard procedures. The dark bands on the upper part of immunoprecipitated proteins (lane 2) represent proteins from the antiserum, raised in rabbits against the purified subunit IV.

COX is composed of 13 tightly bound protein subunits, which are partly encoded on mitochondrial DNA (subunits I-III) and partly on nuclear DNA. The subunit composition was verified by immunoprecipitation of the enzyme from solubilized rat liver mitochondria with an antibody specific against COX subunit IV as shown in Fig. 1. The transport of electrons from the food molecules to oxygen and of proton translocation across the inner mitochondrial membrane is regulated in a complex manner, partly based on the expression of isoforms for some COX subunits (IV, VIa, VIb, VIIa, VIIb, and VIII) in certain tissues. But so far, in addition to subunits I-III, only for subunits IV, Va and VIa a specific function could be identified.

The rate of oxygen combustion is also regulated by phosphorylation of protein subunits. Meanwhile 18 phosphorylation sites have been identified in different COX subunits under living conditions. It is proposed that under physiological stress the phosphate group at some COX subunits is removed by specific stress enzymes leading to increased mitochondrial membrane potential (about 180 mV). High membrane potentials lead to the formation of reactive oxygen species (ROS) in the mitochondria. Prolonged increased ROS levels in vivo have been shown to cause multiple degenerative diseases. Therefore further research on the effects of COX phosphorylation on the activity of the enzyme will be important for the understanding of the role of physiological stress on the generation of degenerative diseases in humans.