The complementary anti-inflammatory and anticancer activity of hydroxycinnamic acid derivatives

Inflammation is an important and extremely complex biological process involving a high number of mediators responsible for the activation of multiple cascades, providing a wide range of possible targets for the pharmacological treatment of inflammatory-related diseases. It is currently accepted that inflammation predisposes to the development of cancer and promotes all stages of tumorigenesis. The involvement of the inflammatory process in the development of almost all types of cancers might be a process orchestrated with the activity of inflammatory cells. Neutrophils are the first cells to migrate to the inflammatory sites and are well known for the hyperactive production of pro-oxidant species in a process known as oxidative burst. The overproduction of these species or the impairment of antioxidant defenses may culminate in the oxidative stress, creating conditions for the aggravation of the disease.

A large amount of scientific evidence reported in the literature suggests that phenolic compounds present in diet or consumed alone can act as anticancer and anti-inflammatory agents. Among these phenolic acids the hydroxycinnamic acids group, which comprises a three-carbon side chain (C6–C3) structure, can be highlighted.

Therefore, it was intended to find if n-hexylamide derivatives of caffeic, ferulic and 3,4,5-tryhydroxycinnamic acids, along with their parent acids (Fig. 1), can be considered agents suitable for modulation of the inflammatory process, trough the inhibition of human neutrophils’ oxidative burst, and simultaneously restraining the growth of two colon adenocarcinoma cell lines with different genetic background and origin localization, WiDr (rectosigmoid) and C2BBe1 (descending colon).

The synthesis of the hexylamides 4 to 6 (Fig. 1) was performed through a single-step reaction involving the cinnamic acids 1 to 3 with hexylamine, in dimethylformamide and triethylamine, in the presence of the coupling agent BOP, at room temperature. This is a specially appropriate procedure to allow the direct amidation of α,β-unsaturated acids, leading to the desired amides in good yields (from 39% to 70%). CAHA (4) was the most active compound acting simultaneously as antiproliferative in both colon cancer cells and as inhibitor of human neutrophils’ oxidative burst (Figure 2A), indicating that the presence of a catechol group as the best structural feature for achieving these effects. The explanation for this may lie in the increased lipophilicity of the amides, conferred by the additional alkyl chain, when compared to that of the parent acids, which is expected to favor their entrance in the cell possibly favoring its activity against the studied cellular models. 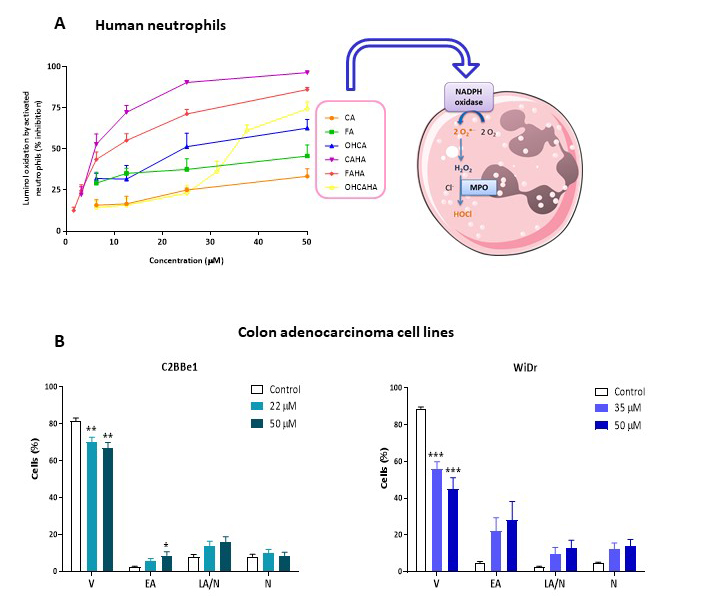 Fig. 2. A) Effect of the compounds under study (0-200 µM) on human neutrophils’ oxidative burst stimulated with PMA, as measured by luminol-amplified chemiluminescence. The values are given as the mean±SEM (n≥4); B) Cell viability analysis (annexin/propidium iodide), after incubation of C2BBe1 and WiDr cells with CAHA (4) for 48 h. Results are expressed as the mean±SE of viable (V), in early apoptosis (EA), in late apoptosis and/or necrosis (LA/N) and necrotic cells (N) of at least four independent experiments in duplicate.

The antiproliferative effect of CAHA (4) occurred due to alterations in the cell cycle arrest and the decrease in mitochondrial membrane potential, which results in an increase of apoptotic cells (Fig. 2B). The increase of intracellular superoxide anion radical could be an oxidative trigger for DNA damage and mitochondrial dysfunction, responsible for cell death mechanism of CAHA (4). The most pronounced production of superoxide anion radical observed in WiDr cells is possibly related with the presence of p53 protein, which is absent in C2BBe1 cells.

The results here described are the starting point to find more effective phenolic compounds that acts dually, as anti-inflammatory and anti-cancer agents.