There are many messages about nanomaterials. There are the both bad and good facts. It is clear these substances are fastly penetrate into many fields of everyday life, such as food, cosmetics, pharmaceutics, electronics, etc.

Therefore one should know whether these substances are useful. Moreover, one should know whether these substances are dangerous. Some toxic effect can be detected very fastly. However some other toxic effect can be detected only with using data on several generations. Mutagenicity is the kind of harm which can be detected only by means of comparison of health of several generations. Thus, exotic and magic nanomaterials can also play the role of dangerous “coral reefs” in ocean of nanotechnologies present and expected in the near future.

Nanomaterials are characterized by untypical, strange, and “inconvenient” molecular architecture. Traditional methods of prediction of physicochemical and biological behaviour as rule are not appropriate for nanomaterials, because the essence of the traditional methods is the using of data on the molecular structure for the comparison and the further prediction of the behaviour of substances. 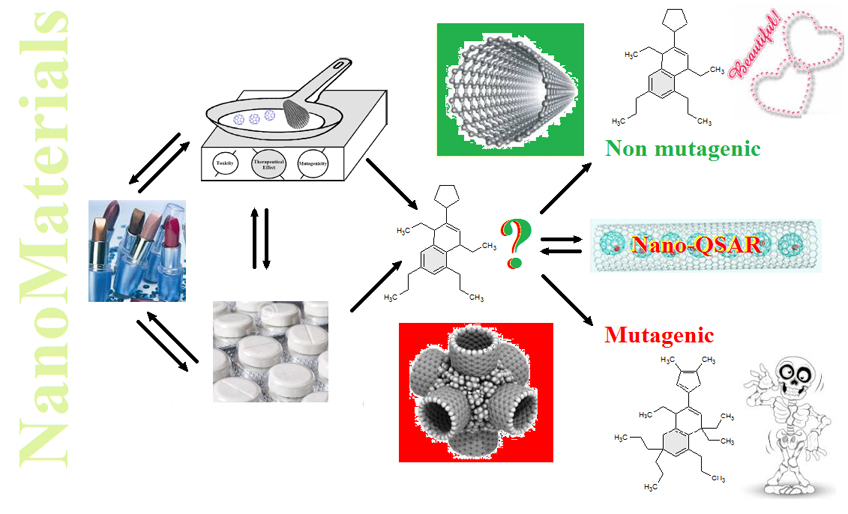 A village can be weakly connected with other parts of planet. A city must be connected with other cities. The economic status of village is defined by proportion of men, women, and children: small number of workers as rule lead to decrease of economic potential of village. In the case of a city these criteria can be uninformative, but one can define special criteria of economic potential of city (uninformative for a village), e.g. the number of airports.

If to continue this analogy one can state. In the case of traditional substances the basis to predict a physicochemical and/or biological potential of substance (“village”), it is needed to compare the molecular structure of the given substance with the molecular structure of other similar substances (analogy of proportion of men, women, and children in villages), whereas, in the case of nanomaterials it is needed to compare other informative characteristics.

The CORAL software (http://www.insilico.eu/coral)  gives possibility to automatic carrying out the analysis of the above-mentioned records, related to nanomaterials. Moreover, in the future, it is possible integration of separated recommendations into united system of estimation of mutagenicity fullerene and multi walled carbon nanotubes (MWCNTs).