The dental nerve circulates in a canal within the mandible 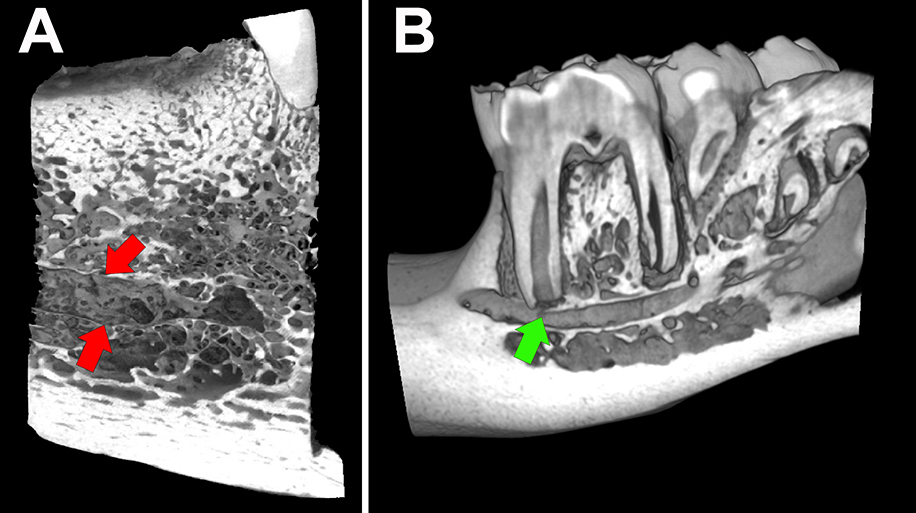 X-ray micro computed tomography shows that the walls of the canal are composed of thin plates of trabecular bone with numerous perforations. This aspect is highlighted in dentate subjects; it becomes more evident in edentulous subjects with a marked atrophy of the alveolar bone.

In rodents, there is only one incisor per hemi-mandible; this tooth has a continuous growth throughout life and appears with a long saber-shape. Mice and rats have three molars and rabbits five. In rats and mice, the canal walls also appear to be composed of trabecular plates from the surrounding a lveolar bone. In rabbits, similar observations are also made but the trajectory of the duct is more difficult to identify. In cats, the floor of the dental canal is composed of cortical bone from the basal cortex of the mandible and the roof is trabecular in nature. In animals, the amount of alveolar bone is significantly reduced compared to humans.

Arterial trajectories within the mandibular canal were studied by intra-vascular injections of gelatin-barium in rats and humans and show the existence of an important vascularization. In man, histological bone sections were performed without decalcification and showed the microscopic appearance of IAN and its various connective tissue envelopes. Some nerve bundles can be observed outside the main conjunctive envelope of the nerve. A bone remodeling is observed on the walls of the mandibular canal and corresponds to an adaptive phenomenon.

IAN travels in a canal made by a particular arrangement of alveolar bone trabeculae and not by a cortical bone sheath except in the cat. It is surrounded by several connective sheaths and the outer one is directly affixed against the canal bony wall. Bone loss results in the appearance of large pores and thinning of the bone trabeculae that constitutes the canal. Like any peripheral nerve, IAN consists of a group of protected axons surrounded by a myelin sheath and several connective sheaths. 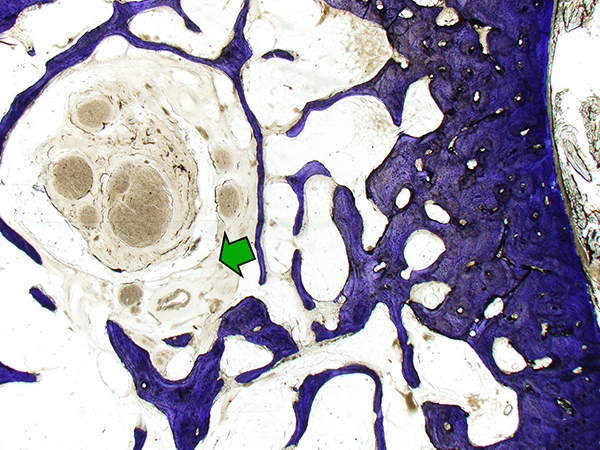 Fig. 2. Frontal section of the mandible showing the IAN in the mandibular canal. The walls of the canal are composed of thin and fenestrated trabeculae in continuity with the surrounding alveolar bone. The nerve appears in the form of numerous rounded bundles sectioned transversely and surrounded by its conjunctive sheaths that also contain arterial, venous and lymphatic vessels (green arrow).

These descriptive findings have clinical relevance in dental implantology or mandibular surgery. Despite known anatomical variability of the IAN, there is a common overall trajectory of the mandibular canal that must encourage the greatest caution in patients. The need a systematic imaging of the mandible with cone beam computed tomography before any surgery is mandatory to detect unusual variations such as externalization of the canal in the oral region, presence of a retro molar canal, before corrective surgery of the mandible or before dental implant placement. However, contrary to erroneous descriptions reported by radiologists on CT scans, the walls of the canal are not made by cortical but by trabecular bone.