The direct effects of fingolimod in the central nervous system

Multiple sclerosis (MS) is an autoimmune disease affecting the central nervous system (CNS). In people with MS, an immune system error causes lymphocytes (white blood cells) to leave glands known as lymph nodes (where they are stored), enter the CNS via the bloodstream and mistakenly signal an attack on a nerve protein called myelin (Fig. 1). Myelin makes up a sheath that insulates nerves to ensure impulses from one nerve are transmitted correctly to another nerve, or to a muscle or a gland.

In MS, activated  lymphocytes that are responsible for the attack on myelin cause inflammation, leading to areas of scarring known as MS plaques or lesions (Fig. 1). This scarring blocks the transmission of nerve impulses, resulting in the symptoms associated with MS. In early MS, brain cells can repair some of the scarring, allowing nerves to function normally again. As MS advances, normal brain repair processes fail, and there is a progressive loss of structure and function in areas of the brain (neurodegeneration). Over time, irreversible loss of brain tissue leads to permanent disabilities. 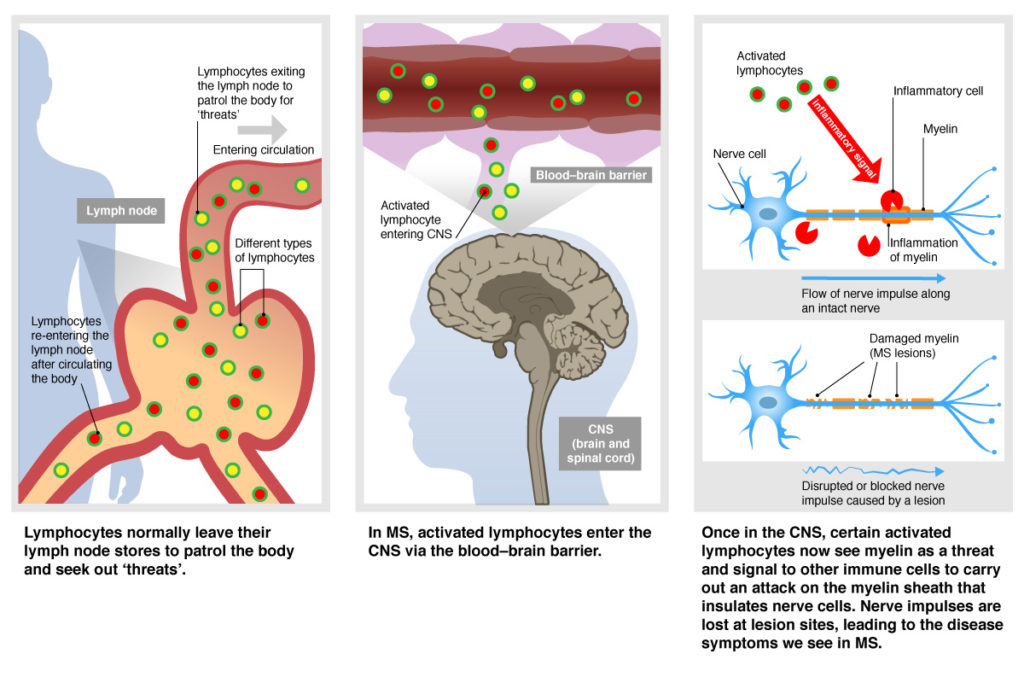 Several treatments are available that slow the progression of MS. One such treatment is fingolimod – a pill that selectively targets certain types of lymphocytes and stops them from leaving the lymph nodes and entering the CNS, where they would otherwise cause damage (Fig. 1). Fingolimod achieves this by recognizing specific sites (receptors) on the surface of these activated lymphocytes. Importantly, clinical trials have shown that fingolimod preserves the immune system’s ability to fight ‘real’ threats (such as viruses and bacteria) because other types of lymphocyte are unaffected by the drug.

Not all drugs are able to cross the blood–brain barrier and fingolimod’s molecular structure is designed to allow this. Imaging techniques show that fingolimod accumulates in the brain, indicating that the drug acts directly within the CNS. Once inside the CNS, fingolimod interacts with brain cell receptors, like those present on lymphocytes.  Experiments have demonstrated that, via it’s interaction with several brain cell types, fingolimod has the ability to help repair and prevent the nerve cell damage that causes MS symptoms (Fig. 2). 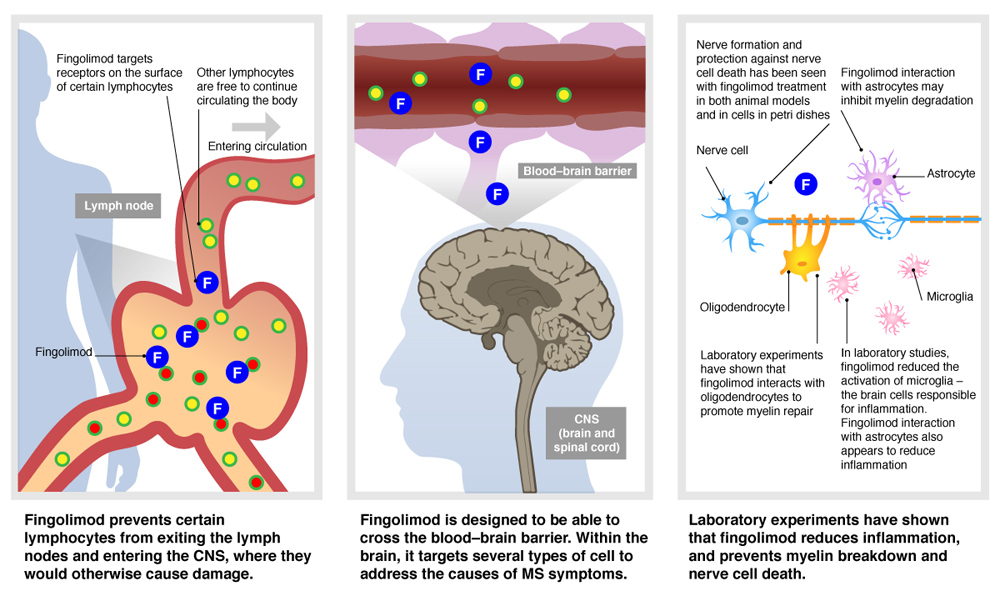 Fig. 2. Fingolimod prevents damage to the CNS and may help repair myelin

Our understanding of how certain cells in the brain function and our extensive knowledge of the effects of fingolimod on these cells in the laboratory, lead us to believe that fingolimod has a positive effect directly on MS brain cells. The main cells of the brain responsible for inflammation are called microglia. Normally, microglia cells seek out and destroy infectious invaders within the brain; in MS, however, they may be responsible for enlarging MS lesions. Laboratory experiments show that fingolimod reduces microglia cell activation, suggesting that it could prevent lesion formation by reducing the inflammation within the MS brain. Other anti-inflammatory actions of fingolimod, such as reducing the production of inflammatory signals through interaction with astrocytes (CNS support cells), have also been noted (Fig. 2).

Some experiments have shown that an interaction between fingolimod and astrocytes may inhibit myelin breakdown; others have shown that fingolimod also promotes myelin repair by interacting with specialized myelin-producing CNS cells (known as oligodendrocytes), as well as promoting nerve formation, and protecting against nerve cell death (Fig. 2).

Fingolimod modulates the immune system by withdrawing certain lymphocyte types from circulation. The immune system continues to function and may become weakened if patients receive other medications that affect the immune system in the period adjacent to, or during, fingolimod treatment. Immune system suppression could leave patients vulnerable to serious infection. Accordingly, when switching patients to fingolimod from the immunosuppressive MS medication natalizumab, physicians allow a few weeks between treatments.

During fingolimod treatment, patients and clinicians should be aware of possible signs of serious infection such as progressive multifocal leukoencephalopathy (PML; a rare viral infection that can occur in patients taking some MS medications). As soon as any potential signs of PML are noticed treatment should be stopped and the cause of infection determined. Particular attention should be paid to patients most at risk of opportunistic infections such as the elderly or those previously treated with immunosuppressive drugs.

Together a wealth of information,  from both laboratory experiments and clinical trials, indicate that the capability of fingolimod to help repair and protect the CNS is a potentially important aspect of fingolimod therapy that may contribute to the improvement of brain health in patients with MS.

Acknowledgments, funding and conflicts of interest: This article represents the opinion of the author, who did not receive funding for its preparation or submission. Medical writing support was provided by Oxford PharmaGenesis, UK. Review of data for scientific accuracy, and funding for medical writing support and open access fees were provided by Novartis Pharmaceuticals Corporation, USA. Samuel F. Hunter has received consulting fees and/or research support from and/or served on speakers’ bureaus for Acorda, Avanir, Bayer, Biogen Idec, Eli Lilly, Genzyme, Novartis, Osmotica, Roche, and Teva.