Our immune system has a fascinating ability to distinguish between what does or does not belong to our body. This ability allows it to fight off infectious agents without harming our own cells. T cells are key components of the immune system. After maturing in the thymus, where they learn to recognize a specific foreign body, known as cognate antigen, T cells continuously move throughout our body in search for foreign pathogens. Once they encounter their specific cognate antigen, T cells get activated and recruit other immune cells to mount an immune response. The importance of having functional T cells is evident in HIV/AIDS infections, where the virus eliminates a specific type of T cells known as CD4+ T lymphocytes, weakening the immune system and preventing it from fighting infections efficiently. 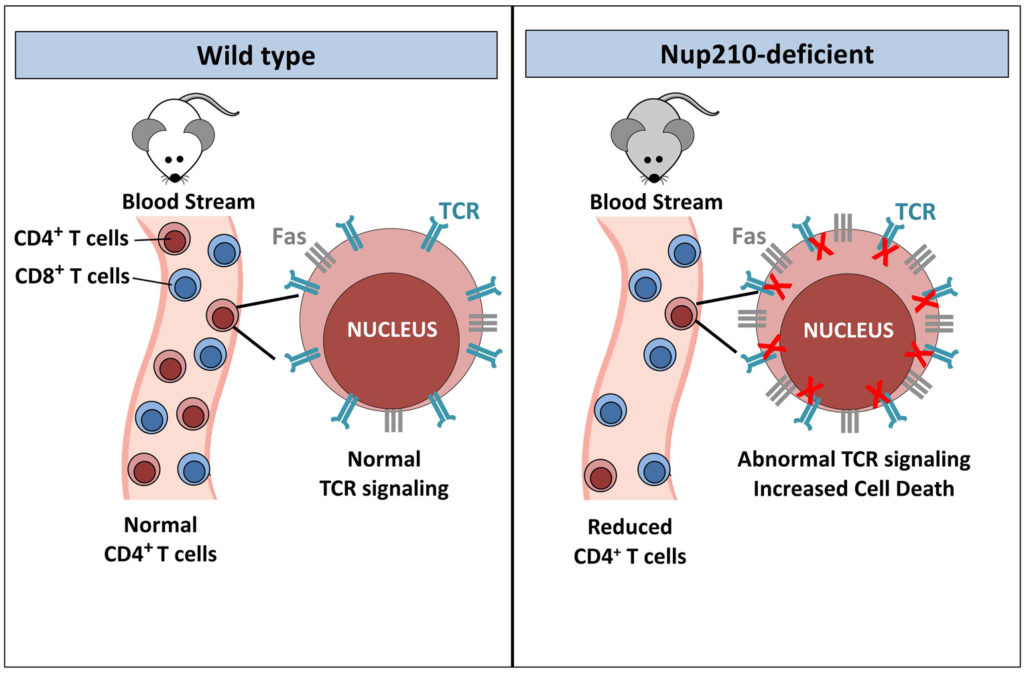 Like all eukaryotes, T cells have their genetic material (DNA) enclosed in a structure known as the nucleus, the control center of the cell. The separation of the genome from the rest of the cell requires a transport system that allows molecules to move in and out of the nucleus, to control the activity of the genes stored inside. For this, cells use nuclear pore complexes (NPCs), large multi-protein channels that act as the doors to the nucleus. In addition to regulating the transport of molecules, NPCs play other cellular functions, such as the regulation of gene expression. Recently, the function of NPCs has been linked to the regulation of the immune system. But which immune cells and processes are regulated by these structures are still poorly understood. In our study, we identified that an NPC component called Nup210 was present at high amounts in immune tissues. To study its functions we generated a mouse that lacks this protein. While these animals had no obvious defects, a detailed analysis of their immune system showed a drastic reduction in the number of T cells, in particular of CD4+ T cells. Notably, Nup210-deficient animals were able to generate normal numbers of CD4+ T cells in the thymus, but these cells died prematurely when circulating, and were not able to activate when challenged. While investigating the causes of these alterations, we uncovered that without Nup210, CD4+ T cells cannot properly transmit signals from a cell surface receptor, the T cell receptor (TCR). TCRs are the receptors that recognize cognate antigens in pathogens, and signal T cells to activate and fight. Also, in the absence of a foreign antigen, these receptors continuously provide low signals, called tonic TCR signals, that are fundamental for the survival of circulating T cells. In our work, we identified that eliminating Nup210 in T cells drastically reduces TCR signaling, making them more sensitive to cell death. The way Nup210 regulates the function of TCRs is by modulating the levels of a protein known as Caveolin 2, which helps the activated TCRs to congregate at the cell’s surface to maximize the transmission of their signals. We also found that Nup210 is required to block production of a different cell receptor known as Fas. When present, this receptor makes T cells more sensitive to death signals. Thus, eliminating Nup210 from T cells not only prevents them from sensing TCR survival signals, but also makes them more prone to dying by increasing the levels of the Fas cell death receptor.

Our work exposed for the first time that NPCs are required for T cell survival and function. These findings provide novel insights into how the immune system functions, and can potentially pave the way to the future development of novel strategies to promote an immune response towards pathogens.