The evolutionarily conserved role of Sp1 in appendage morphogenesis

Despite millions of years of independent evolution, some aspects of vertebrate and arthropod development share striking similarities. For example the appendages of a mouse and of a fly, at the naked eye doesn’t seem to share too many similarities at the exception of their function: locomotion. However, although non-homologous structures, the leg of a mouse and of a fly share a similar underlying genetic program to build them, a similarity that has been referred to as ‘deep homology’. Some of the conserved genes necessary to build an appendage include the Dll/Dlx genes and the family of Sp transcription factors. Two members of the Sp family of transcription factors, Sp1 and buttonhead (btd), are involved in the specification of leg identity from flies to mice. Therefore in the absence of these two genes in Drosophila melanogaster –the fruit fly–leg formation is abolished (Fig. 1) and their ectopic expression in regions of the fly where they are not normally expressed, as the wing, cause wing-to-leg cell fate transformations. However how btd and Sp1 control the leg developmental program is unknown. 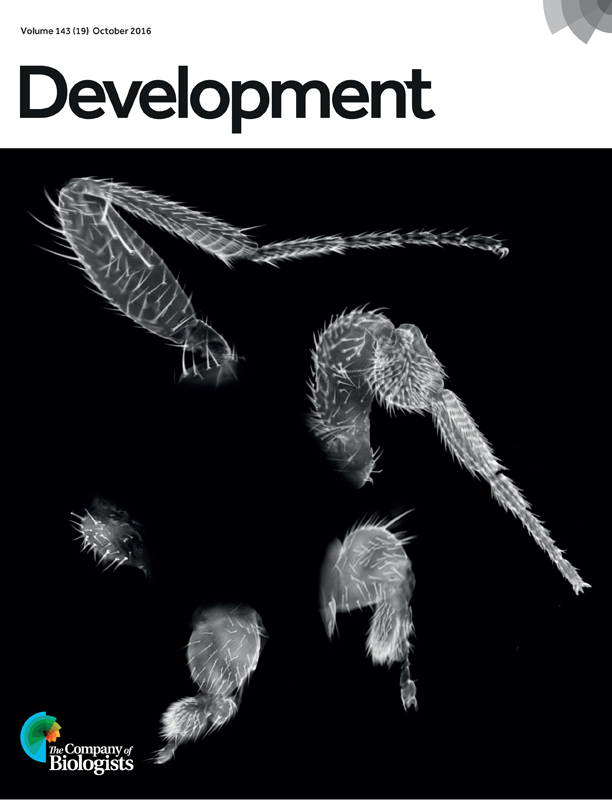 Fig. 1. Cover of the journal where the work was published. Leg phenotypes obtained after a progressive reduction in the dose of Sp family genes in Drosophila. Clockwise from top left: wild type, btd mutant, Sp1 mutant, Sp1 mutant with one mutant copy of btd and Sp1, btd double deletion mutant.

Using specific mutants created through gene editing techniques for Sp1 and btd, and combinations of both, we have been able to clearly determine the specific contribution of each gene in leg development and growth, and concluded that Sp1 has a more important role in the process. Sp1 mutant flies present a strong reduction in the overall size of the leg and defects in the formation of the leg joints (Fig. 1).

The Notch (N) signaling pathway is required for both joint formation and coordinating growth in the Drosophila leg. In this work we have demonstrated that Sp1 controls N activity by means of regulating the expression of its ligand Serrate (Ser). When Sp1 is knocked down, Ser is not activated and N activity is lost, causing joint loss and growth defects. Conversely, if Sp1 is ectopically expressed, it activates Ser expression (Fig. 2). We also have identified a specific enhancer (a sequence of regulatory DNA) that controls the expression of Ser in the tarsal region of the leg, and tested that Sp1 can directly bind this sequence and regulate Ser expression trough it.

In addition, we searched for other targets of Sp1 that could contribute to the size and shape of the leg besides N activity. To that end we performed a genome wide transcriptome analysis using RNA-seq to find genes that are differentially expressed in Sp1 mutants.

In summary, our work describes the key role of Sp1 in the growth and morphogenesis of the fly leg, as well as identifies the N pathway as a key and direct target of Sp1 activity. 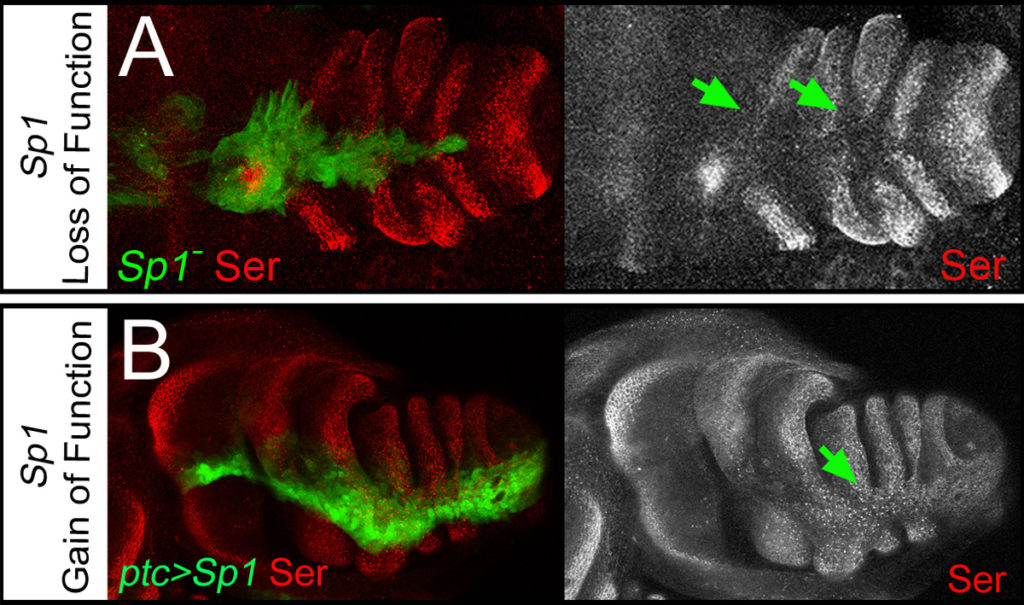 Fig. 2. (A) Prepupal leg imaginal disc with mutant cells for Sp1 (marked with GFP, green) that cause the autonomous loss of Ser antibody staining (red and separate channel in grey). (B) Ectopic expression of Sp1 in along the prepupal leg imaginal disc (marked with GFP, green) cause ectopic expression of Ser (Ser staining in red and separate channel in grey).

Interestingly, members of the Notch pathway in vertebrates, including the Ser ortholog jagged 2 are expressed and required in the limb. It would be interesting to investigate further the possible relationship between the Sp genes and the Notch pathway in vertebrates, and test whether the functional relationship described in this work is also maintained throughout evolution.

Our results and others propose that the regulatory systems that pattern the arthropod and vertebrate leg were also employed to pattern an ancestral appendage. These conserved regulatory mechanisms were modified during evolution to generate the different morphologies of animal appendages.