The exploration of gene expression in Atlantic bluefin tuna

Atlantic bluefin tuna (Thunus thynnus), the largest of the tuna species, is migratory top predator inhabiting the North Atlantic Ocean and the Mediterranean Sea. Extremely well adapted to life in open waters, they are able to traverse large horizontal and vertical distances in search for food. One of their most interesting physiological characteristics, unlike most other fish, is the ability to maintain elevated body temperature in muscles, viscera and brain. Highly prized as a source of nutritionally valuable food, tuna populations have been endangered by overfishing. In addition to strict catch quotas imposed by the International Commission for the Conservation of Atlantic Tunas (ICCAT), it is regarded that domestication and development of tuna aquaculture practices can preserve the species for future generations and meet the demands of constantly expanding markets. Bluefin tuna aquaculture in the Mediterranean is still capture-based activity, with fish caught in the wild each year and subsequently fattened for 3 months to 2 years to reach commercial size. Significant progress has been made in the past decade regarding the control of tuna reproduction in captivity with many production steps still to be optimized and issues resolved. 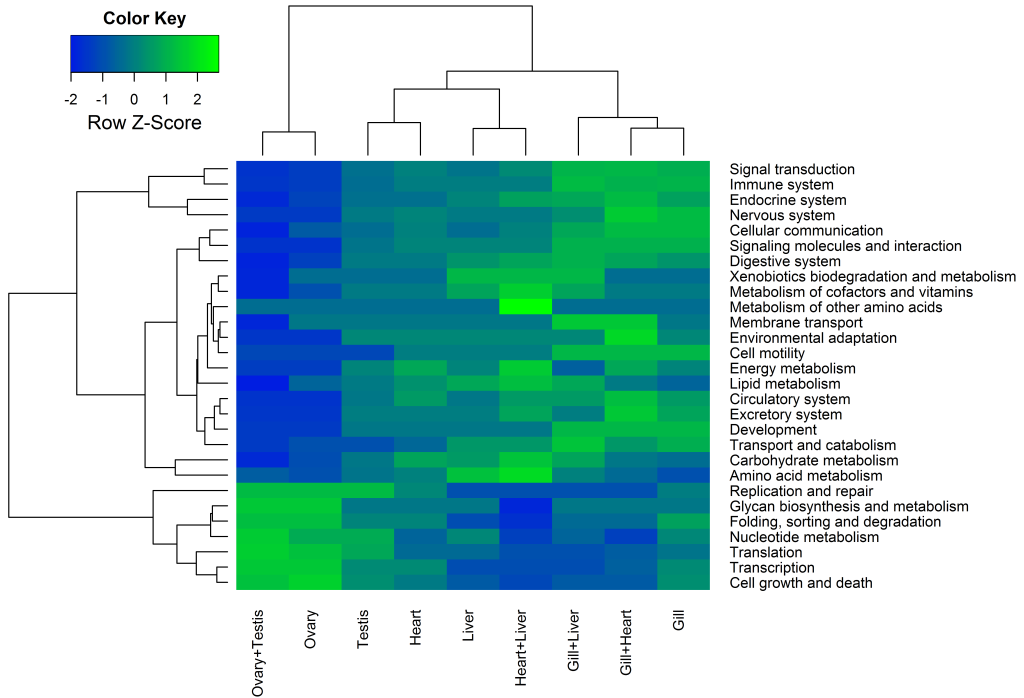 Fig.1. Functional comparison of Atlantic bluefin tuna tissues based on expression profiles inferred through the use of a microarray. The profiles were grouped into metabolic and signaling pathways as classified by KEGG (Kyoto Encyclopedia of Genes and Genomes) and relative activity of each group in a tissue or their combinations represented by a heatmap, hierarchically clustered by similarity. Functional contrasts were most pronounced between gills and ovaries. Gills were associated with various functions linked to immune system, signal transduction, cell communication, while ovaries displayed signatures of glycan biosynthesis, cell growth and death with intense transcription, translation, replication and repair.

In this study we have used a next generation sequencing technology to obtain nucleotide sequences of a sample of adult tuna transcriptome, RNA copies of activated genes present in a cell depending on its function. In total, 33,105 sequences were reconstructed of which 33.4 % identified based on a similarity with known proteins submitted to public databases. 86.6 % of them were matched to the congeneric Pacific bluefin tuna (Thunnus orientalis) genome, the only tuna genome currently available. The sequences were used as a template for construction of a microarray, tool used for quantification of gene expression or gene activity. Microarray consists of an array of nucleotide probes specific for genes of interests arranged on a glass slide, approximately 15,000 in this case. After overnight incubation on a slide, the quantity of each transcript in a sample is extrapolated from fluorescent signals that reflect the level of hybridization between a transcript and its corresponding probe.

Here, we have compared the profiles from different tissues, gill, heart, liver, ovaries and testes (Fig.1.), of adult tuna grown on Croatian farms in the Adriatic Sea for two years. The data created in this study provide good basis for development of more focused studies of tuna ecology and genomics with strong applications in aquaculture. The responsible management of any species today requires the knowledge and use of genetic sequences and markers that can be employed in selection and breeding programs, study of environmental tolerance, disease resistance, etc.