The fossil viruses from within that shape evolution

Our genome contains a colossal amount of virus-related sequences. Over 4 million fragments of our DNA derive from mobile genetic elements, some of which once were viruses that infected the germ line (egg or sperm cells) of our ancestors, and thus became integral parts of their genetic baggage, transmitted from generation to generation. These transposable elements (TEs) outnumber genes by a swift two orders of magnitude (> 4 million versus ~25’000 genes). We call the sum of all TEs in a genome of a species its Endovirome. 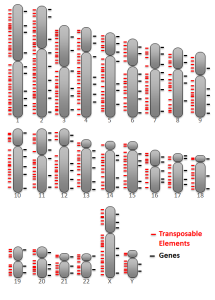 TEs threaten genome integrity owing to their ability to jump and land at random in new chromosomal locations, whether by cut-and-paste (for so-called DNA transposons) or copy-and-paste (for retrotransposons) mechanisms. Accordingly, all species including humans have evolved defenses aimed at controlling their spreading potential. In spite of these, and although over time TEs accumulate incapacitating mutations, the genome of about one in twenty human newborns carries a new TE integrant.

TEs were for a long time considered as purely “selfish” or “junk” DNA, yet it has recently come to the fore that, despite their lack of transposition activity, many pieces of the endovirome are still transcriptionally active (transcribed into RNA). We denominate the sum of all RNAs derived from TEs in a cell its Transposcriptome. Furthermore, many TEs serve as docking sites for cellular proteins that regulate gene expression. These phenomena in turn affect the expression of host genes.

That TEs can accurately control the timing of host gene expression is perhaps best exemplified in early mouse embryos, where a TE known as MERVL drives expression of genes restricted to the two-cell stage. During early human embryogenesis, stage-restricted transposcriptomes can be delineated as well, which likely correspond to a tightly regulated developmental program not only for the endovirome but also for genes placed under its influence. Furthermore, the control of host genes by the endovirome is not restricted to early embryonic development but can also be documented in adult tissues, for instance the brain.

Inappropriate endovirome activity has been linked to diseases such as cancer and schizophrenia, and we observed that anomalies in the transposcriptome of induced pluripotent stem cells (iPS) correlated with anomalies of their phenotype.

Most importantly, the components and distribution of the endovirome and the nature of its controllers are largely restricted to a species and its closest relatives. Thus, TEs and their modulators impose a species-specific layer of regulation on likely all biological events essential for human development and physiology, whether in health or in disease.