The H5N2 avian epidemic: prognosis of the next influenza outbreak

Influenza is a viral infectious disease that afflicts millions of people every year with fatalities of thousands; sometimes significantly more when it emerges in a pandemic form. The Spanish Flu of 1918 was probably the most severe pandemic ever with fatalities at over 20 million worldwide killing more people than in four years of World War I or in the Plague in Europe; a milder form pandemic, the swine flu of 2009, killed over 280,000. Influenza is more widely prevalent in birds: The H5N1 bird flu led to culling of millions of birds to contain the epidemic, now a H5N2 variety is creating havoc in American poultry farms. 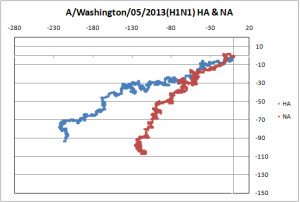 Fig. 1. 2D graphical representation of A/Washington/05/2013(H1N1) hemagglutinin (HA, in blue) and neuraminidase (NA, in red) of an influenza H1N1 subtype. The separation between the representations of the two genes is characteristic of such subtypes and remains reasonably constant over various strains of the subtype.

The influenza virus spreads through contact or through the air and its genes mutate rapidly enough that new strains and varieties arise regularly to bypass immune systems and cause recurrent infection. The genetic mutations often alter two surface proteins, hemagglutinin and  neuraminidase, of the virus particle which is almost spherical in shape with the genetic material contained inside. The hemagglutinin initiates entry of the virus into the host cell for proliferation, the neuraminidase facilitates release of the newly formed progeny viruses to attack more cells. 18 varieties, or subtypes, of hemagglutinin and 9 varieties/subtypes of neuraminidase have been identified so far, which scientists have labeled as H1, H2, …, N1, N2, … etc. Since the two proteins hold the keys to successful infections, the influenza variety is labeled by the two subtypes: thus the H1N1, H5N1, H7N9, etc. However, not all combinations occur in the wild; only a few subtypes seem to predominate, like H1N1, H5N1, H3N2 and some others. The underlying cause is not yet known, but experiments have shown that artificially combining different subtypes in the laboratory results in influenza strains that are rather weakly infecting or low in pathogenicity. Further, computer simulations have shown that mutational changes in one seem to influence mutational changes in the other so that there is some kind of interdependence between the two genes.

These observations led us to hypothesize a coupling between the hemagglutinin and neuraminidase genes which will be conserved for viable subtype combinations ensuring that changes in the sequence of one gene will necessarily lead to a co-ordinated change in the other. To compute such couplings we considered a 2D graphical representation of the two genes (Fig.1) where the constituents of the sequences are plotted sequentially taking one step at a time in the designated directions. The observed interdependence between the genes imply that the two sequences should move approximately in tandem with the distance between them remaining conserved. The distance can be computed by fairly simple maths and can represent the coupling. From a survey over numerous influenza subtypes we found that the coupling turns out to be reasonably conserved for each subtype and indeed varies appreciably if one or the other subtype is substituted with an extraneous subtype.

This then permits us to consider an infectious flu variety and contemplate possible subtype combinations that could retain the acceptable couplings and thereby create new viable flu varieties. The current H5N2 flu epidemic in the USA has raised concerns whether the virus could mutate to new highly pathogenic varieties. Given that the H5 in H5N2 has been identified to be of Asiatic origin where the earlier highly pathogenic H5N1 bird flu originated, we considered possible combinations of the H5 with all subtypes of neuraminidase. We found that three combinations, H5N4, H5N6 and H5N9 resulted in coupling strengths close to that of the H5N2, which, according to our hypothesis, imply that such new flu varieties could be potentially as pathogenic as the H5N2. This prognosis can help monitoring agencies to focus attention on few of the possible pathogenic forms that may arise for early preventive actions.