For farmers, glyphosate is a very familiar chemical compound because it is one of the broad-spectrum herbicides more used worldwide in agriculture. Even it is also applied in non-cultivated areas to keep the growth of weeds under control. 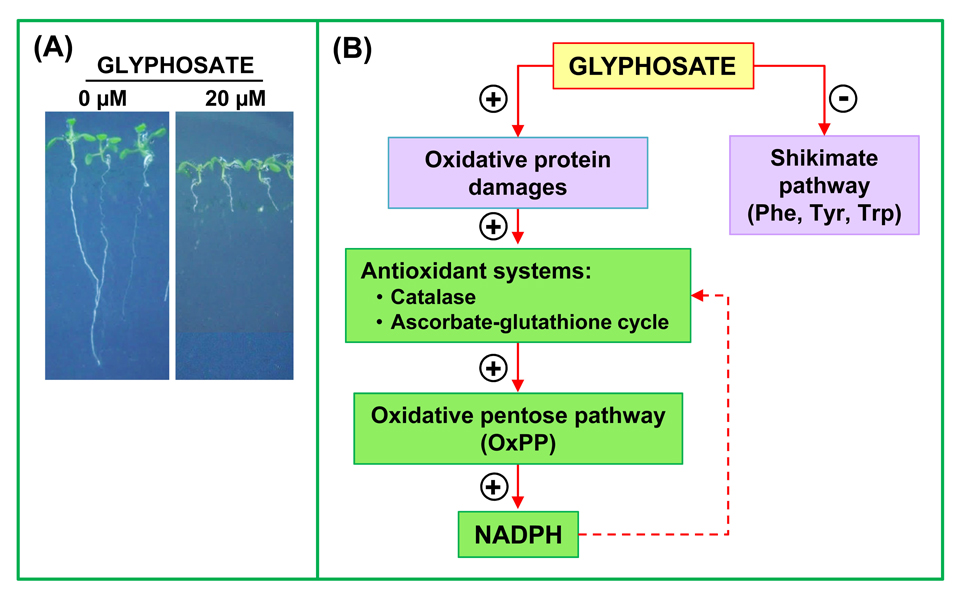 The mechanism of action of glyphosate is throughout the inhibition of the shikimate pathway which is a critical for the biosynthesis of essential aromatic amino acids such as phenylalanine (Phe), tryptophan (Trp) and tyrosine (Tyr) affecting protein functions (Fig. 1). This herbicide is usually sprayed onto plants but part of the applied herbicide can go directly to the soil or it could be washed off of plant after rain. Consequently, the glyphosate can be accumulated in soil or goes to rivers, groundwater, etc. provoking soil/water pollution. In this context, some health organizations have expressed its concern about that glyphosate could be carcinogenic to humans. However, last December 2017, the European Food Safety Authority and other national authorities from Australia, Japan and Canada amongst others, after the analyses of the available information, concluded that there was no evidence to support that glyphosate can cause cancer in humans or other genetic damages (https://ec.europa.eu/food/plant/ pesticides/glyphosate_en).

Nevertheless, plant studies continue to get deeper knowledge about additional effects of glyphosate in the basal metabolism of plants. In this sense, using 14-day-old Arabidopsis thaliana seedlings, as a model weed, germinated and grown on a medium containing 20 µM glyphosate it was studied how this herbicide could affect the metabolism of reactive oxygen species (ROS) status which it is usually exacerbated under many environmental stresses provoking oxidative damages to different bio-molecules. Figure 1 clearly shows that, in the used experimental conditions, glyphosate reduced considerably the growth (shorter root system) as it could be expected. This should be due to the block of shikimate pathway (biosynthesis of aromatic amino acids). However, the biochemical analyses allowed to determine an increased ROS metabolism characterized by oxidative damages (protein oxidation)  and an alteration H2O2 metabolism with an increase of the activity of key antioxidant enzymes such as catalase (peroxisomal enzyme) and ascorbate-glutathione cycle. Complementary, it was established that the two enzymes of the oxidative part of the pentose phosphate pathway (OxPPP) were also stimulated. These two enzymes (glucose-6-phosphate dehydrogenase and 6-phosphate dehydrogenase) were involved by the NADPH generation, a cofactor and reducing agent, which is essential to support the antioxidant capacity of the ascorbate-glutathione cycle. Taken together, these data indicate that under glyphosate treatment Arabidopsis seedlings undergo an oxidative stress affecting the viability of these plants.