Predicting future events is essential in our ever-changing environment. For example, when we hear a siren sound while driving, we need to form predictions about the course of its loudness in order to decide whether to pull over. Measuring electric potentials from the human scalp can tell us much about sound processing in the brain. Sounds that do not fit into the sequence of previous sounds (“deviants”) cause a detectable change in brain activity. This electric brain signal is termed the mismatch negativity (MMN). In the siren example, our brain detects the regular features of the siren sound, such as its changing volume with the changing distance. However, an MMN response would be elicited if the siren sound suddenly stopped allowing us to note the event. Early interpretations of MMN suggested that it is elicited by sounds mismatching the strong memory trace created for a previously repeating different sound. Later experiments extended this explanation to deviations from regularly changing sound features. This brought up the question of what information is stored for regular sound sequences. Do we represent the probability with which individual sounds or groups of sounds have been encountered, or perhaps we encode the probabilities by which sounds have been following each other? The latter, termed transitional probability, tells the likelihood of next hearing sound “Y” if we have just heard sound “X”.

We examined whether for detecting deviant sounds the brain relies on memory representations encoding the probabilities of individual tones or groups of tones, or it utilizes transitional probabilities. Healthy adults were presented with repetitive sequences of a frequent (standard) tone triplet: High-Low-High (HLH; Fig. 1A). Rare deviant tone triplets were interspersed among the standard triplets. In separate sequences, the deviant was either HHH (the proximity deviant), LHL (reversal deviant), or LLH (first-tone deviant). If deviance detection uses the probability of individual tones, then all low tones should act as “deviants”, because they appeared less frequently than the high tones. If the probability of tone triplets is used by the brain, then reversal and first-tone deviants could already be noted right at their onset, because both start with L instead of H. However, if deviance detection operates on transitional probabilities, then the reversal deviant should be more difficult to detect than the other two, because unlike them, it only contains pitch transitions that are also present in the standard triplet: only the order of the two pitch transitions differ between the reversal deviant and the standard. Thus the brain would have to wait to hear the whole triplet before being able to tell it apart from the standard. 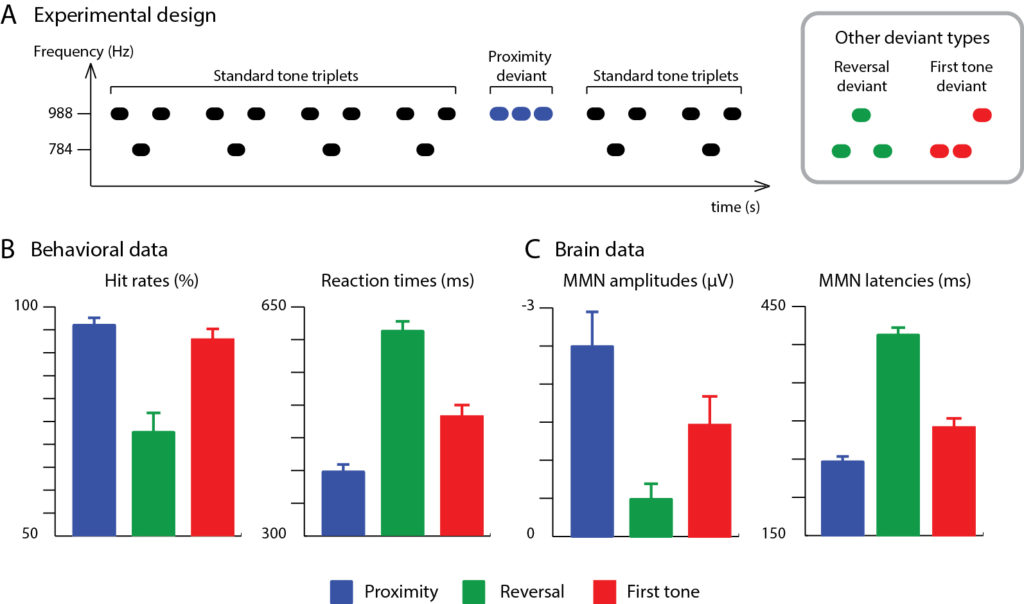 Fig. 1. A. Healthy adults listened to a repeating (standard) tone triplet of High-Low-High (HLH; black) pitch pattern, which was interspersed with rare deviant tone triplets of either HHH (the proximity deviant, blue), LHL (reversal deviant, green), or LLH (first-tone deviant, red) pattern. Time is schematically represented on the x axis, frequency on the y axis. B. Listeners showed lower hit rates and longer reaction times in detecting the reversal than either the proximity or the first-tone deviant. Thus the reversal deviant was most difficult to detect. C. The amplitude of the brain’s automatic deviance-detection response (MMN) was smaller and it peaked later for the reversal than for the other two deviants. These results provide the first definite evidence showing that auditory deviance detection is based on detecting low-probability transitions between successive sounds. Knowledge about transitional probabilities allows one to predict upcoming sounds in a sequence.

Listeners showed poorer performance and longer reaction times in detecting the reversal than either the proximity or the first-tone deviant (Fig. 1 B). Further, the MMN response to the reversal deviant was smaller and appeared later than for the other two deviants (Fig. 1 C). Thus the reversal deviant was the most difficult to detect among the three deviant triplets. This suggests that the brain calculates and stores transitional probabilities from sound sequences and detects rare patterns using this information. So, why is it more advantageous to store transitional probabilities than sound or sound-pattern probabilities? It is because transitional probabilities directly allow predictions for upcoming sounds. Using this statistics, we can tell what sounds are likely to arrive next to our ears. Our discovery strengthens theories suggesting that our brain is a prediction machine. It also complements findings from lower-level brain structures regarding how sound information is gradually transformed in the human brain.