Obesity and diabetes epidemics represent a real health problem worldwide. There are about 2 billion overweight adults out of which over 600 million are obese. Based on National Health and Nutrition Examination Survey reports it has been estimated that in USA, in the 2000s, among adults older than 20 years, 66% is overweight while 28% males and 33% females were obese. According to the reports of the Center for Disease Control between 1960s and 2000s, body weight of both men and women has increased for about 11 kg in average, while the body mass index (BMI) has risen approximately for 3 kg/m2 for both genders. In the same period the average values of waist circumference has been increased for 6 cm among man and 2 cm among women. In this context the worldwide number of adults with a BMI over 25 kg/m2, which is classified as overweight according to World Health Organization, has been dramatically increased in the period 1980-2013 from 28.8% to 36.9% in men, and from 29.8% to 38% in women. Overweight and obesity, especially the visceral type, are associated with well-known metabolic and cardiovascular risk factors. Nowadays more than 387 million people are affected in the world by type 2 diabetes mellitus (T2DM), with a prevalence in general population of 8.3%. The patients with obesity and T2DM have a considerably higher risk of cardiovascular morbidity and mortality, too. 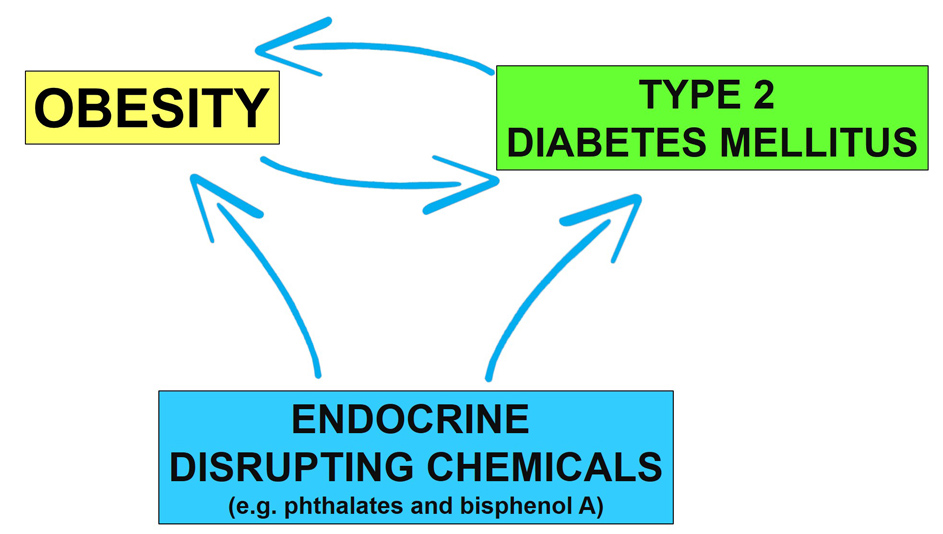 Beside the changes in diet and decreased physical activity, there is growing interest in endocrine disrupting chemicals (EDCs) that may have effects on these conditions. Among them, the role of certain phthalates and bisphenol A (BPA) is confirmed.

The role of some phthalates and BPA in the development of obesity and T2DM is indisputable, although the results of previous studies have partially been inconsistent due to study design (cross-sectional), population, gender and racial differences, but also due to the use of different methodologies. The necessary task of the future well-designed, follow-up prospective studies is to evaluate prenatal and neonatal exposure to the individual phthalates and BPA in a better way, but at the same time, the exposure to other EDCs. In regard to the mechanisms of action, beside the influence on the nuclear receptors, it is necessary to evaluate other endocrine signaling pathways. All of these studies should contribute to the better understanding of the harmful effects of phthalate and BPA and this would lead to better prevention of the development of obesity and T2DM.