The influence of pollution on bone premature aging: the case of the fishbone

Bone is one of the most sophisticated biological structures developed by nature, its major constituent is a calcium phosphate mineral that is similar, in composition and structure, to minerals within the apatite group which are naturally formed in the Earth’s crust. As bone matures, bone mineral fraction becomes more crystalline and its phosphate/carbonate ratio increases. Consequently, the proportion of mature and well-crystallized mineral to newer mineral (less crystalline) varies with time, but also with health condition. The interest in medical and toxicological research, related to the factors altering bone mineralisation, has increased in the recent years and various toxicological studies have proved how many toxicants, like trace elements and organochlorines, may cause skeletal damages and malformations, inducing alterations in bone formation and composition. 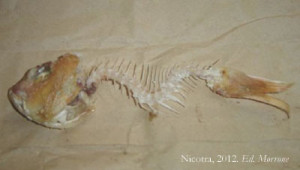 In the last 10 years, in the Augusta Bay (Italy, Ionian Sea, Central Mediterranean), macroscopic skeletal malformations of fishbone, such as scoliosis, abnormal thickening, y-shaped column, and fin deformities have been documented. This area is recognised as a chronically polluted site, especially due to heavy industrialization (chemical and petrochemical plants together with oil reﬁneries), with resulting risks to ecosystem and human health. During the last century, Augusta Bay has been particularly deteriorated by direct discharge of industrial contaminants as well as by navigation and dredging of polluted sediments, which spread xenobiotics, especially mercury, along the entire coastal area and in the surrounding offshore system. In such a context, fish represent a sensitive group to trace element pollution especially in case they belong to high trophic levels of food webs. Although the damages of pollutant exposure have been analysed in several fish tissues, such as muscle, gill, brain and liver, the effect of trace element pollution on fishbone has received relatively little attention.

In this study, fishbone from individuals of four species (Mullus surmuletus, Scorpaena porcus, Pagellus erythrinus and Diplodus annularis) without any sign of macroscopic malformations were analysed in order to evaluate if bone mineral features, such as crystallinity, mineral maturity and carbonate/phosphate mineral content (determined by XR-Diffraction and FT-IR Spectroscopy), suffered negative effects due to trace element levels in fishbone (detected by ICP-OES). The age of each species was also calculated by biometric parameters and the von Bertalanffy equation. 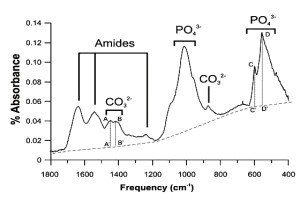 Results showed that, despite that in normal conditions an increase in bone mineral crystallinity is observed with aging , in bone of fish from Augusta Bay such relationship was not found. Conversely an increase in the mineralisation degree of fishbone appeared to depend on mercury (Hg) and chromium (Cr) concentrations. Although Hg showed the typical affinity for muscle tissues, concentrations of this toxicant in fishbone of S. porcus and D. annularis exceeded values documented in the literature for deformed fishbone caught in the same area. S. porcus and D. annularis showed also higher mineral maturity and phosphate/carbonate ratio with respect to M. surmuletus and P. erythrinus, giving evidence that Hg directly affected the physiology of bone cells. Actually, Hg interferes, being nephrotoxic, with calcium metabolism and bone remodelling, suppresses bone cell activities, inhibits osteoclastic activities and generates hypocalcemia and histopathological changes, such as osteopenia and osteomalacia. As the Cr, its elevated concentrations measured in surface and deep sediments of the bay may have negatively influenced the investigated fish bonding to bone tissues and expediting bone mineralisation.

In conclusion this study, beyond giving evidence of a negative influence of Hg and Cr on fishbone aging, it also shows that premature aging of fishbone occurs even if macroscopic deformations are not evident.