The interaction between diet and gut bacteria in Autism Spectrum Disorder

The gastrointestinal tract is inhabited by millions of bacteria that live in a symbiont relationship with the human host. In recent years, researchers have discovered more and more that the gut bacteria can have effects on the host’s behavior and mental process.

Increasing reports are published describing the difference in gut bacteria composition of individuals with behavioral disorders, including Autism Spectrum Disorders (ASD). However, results of the studies are not always consistent so not one clear trend is emerging yet. 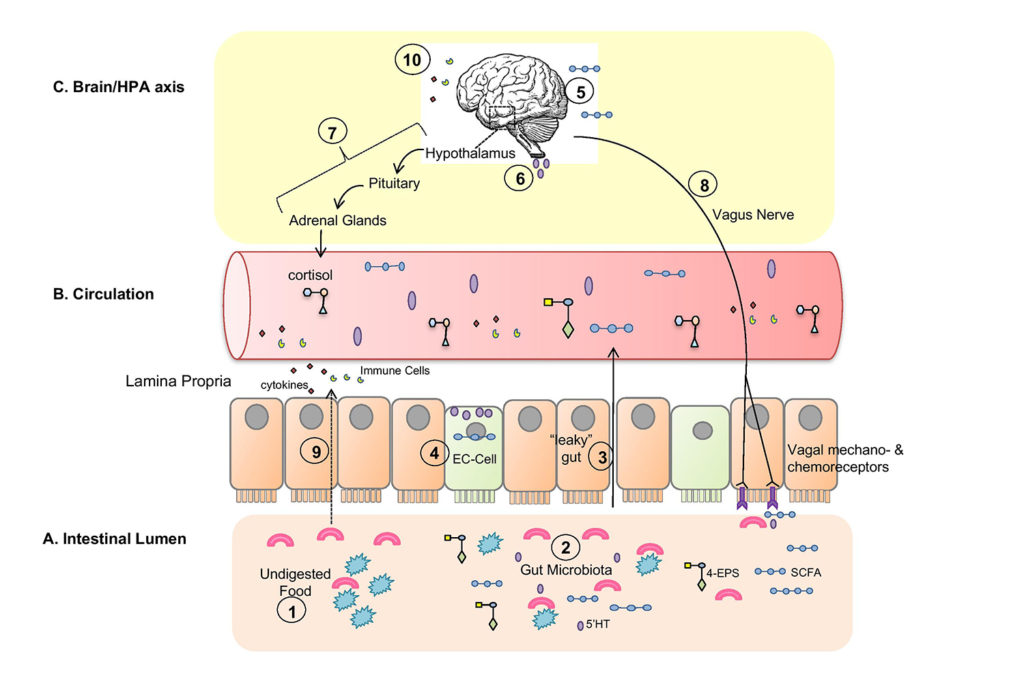 Fig. 1. Possible pathways of the microbiome-brain interaction in ASD can be proposed. Food that escapes digestion by the host can be used by the gut microbiome as energy sources. In turn, bacterial metabolites (e.g. SCFAs, 5-HT) are produced that can be used for physiological functions by the host. (1); Bacterial metabolites with relevance to ASD symptomology include 5’HT and SCFA. 5’HT is produced by certain Lactobacillus, Streptococcus and Lactococcus strains.153 Microbial genera that are greater in children with ASD include propionate producers, such as Clostridia, Bacteroidetes and Desulfovibrio16,17. Increased 5’HT production by the microbiota could lead to tryptophan depletion and contribute to hyperserotonemia observed in ASD. (2); Bacterial metabolites can be translocated into systemic or lymphatic system, transported to the brain and cause behavioral and chemical changes. In addition, abnormal intestinal permeability in children with ASD could allow passive diffusion of metabolites.121 (3); Although 5’HT is predominantly produced from EC-cells in enterocytes, its secretion can be stimulated by SCFAs which could increase the amount 5’HT is released into the circulation.133 (4); When reaching the brain SCFAs can have neurotoxic effects and propionate could elicit ASD like behavior in animal models.127,131 (5); The microbiome itself can have direct effects on the brain by modulating the BBB96 and causing changes in the metabolism of 5’HT in the brainstem (e.g. Bifidobacterium infantis).118 (6); Certain strains of the gut microbiota have been shown to influence the activity of the HPA axis.27,100,135 In children with ASD, increased activity of HPA axis136 as well as increased levels cortisol in the circulation were observed.137 (7); The vagal mediated signaling from the gut microbiota to the brain can be transmitted through vagal chemoreceptors on mucosal villi that are activated by bacterial metabolites (e.g. 5’HT, SCFA) or by vagal mechanoreceptors which sense motility changes induced by some bacterial species.104 (8); The microbiome can influence the development of the immune system through various microbial signals20,94,138. For example, pattern recognition receptors (PPRs) can recognize microbial cell components and metabolites and adjust the immune response accordingly.138 In addition, disturbance of the GI tract can lead to increased permeability of the intestinal barrier allowing immune cells (e.g. lymphocytes) and cytokines to translocate in the circulation (9); In the brain, these immune cells can elicit immune response by increasing permeability of BBB or binding to epithelial cells.62 (10)
Abbreviations: 5’HT: serotonin, SCFA: short chain fatty acids; EC-cells: enterochromaffin cells; GI: gastrointestinal; BBB: blood brain barrier.

Moreover, in children with ASD, differences in bacterial products have been found. Bacteria can use undigested food (i.e., dietary fiber) to create products (bacterial metabolites) that can be absorbed and used by the human host. For example, fermentation of undigested carbohydrates like dietary fiber can be used by the gut bacteria to produce so called short chain fatty acids (i.e., acetate, propionate, butyrate). Using animal models, one of these fatty acids, propionate, has been hypothesized to contribute to some symptoms of ASD. Strategies to manipulate the gut bacteria as a therapeutic potential (e.g., probiotic/prebiotics) showed some improvement in symptom severity, further suggesting that the gut bacteria could impact the behavior of individuals with ASD.

Children with ASD are often very picky eaters. Almost 90% of children with ASD experience some kind of feeding related concern which could be due to food allergies, digestive problems or problematic eating behaviors. Because of these difficult eating behaviors, deficiencies in some nutrients were observed in children with ASD. Some nutrition intervention studies (e.g., gluten-free/casein-free) have explored the potential of diet to manage some symptoms of ASD with limited success

Mechanisms underlying the cross-talk between the gut bacteria and behavior of children with ASD is currently in its infancy. Some studies suggest that effects on the brain can come directly through the bacteria, through bacterial products which translocate into the blood stream, through activation of receptors that send signals to the brain, or through activation of the immune system by components present on bacteria itself (e.g., lipopolysaccharides) (Fig. 1). Because diet and gut bacteria have both independently been shown to have some effect on ASD symptomology and diet is known to be a major environmental factor shaping the composition of the gut bacteria, dietary intake and gut bacteria could potentially act in concert in influencing some symptoms of ASD. Previous studies exploring the gut bacteria in ASD include limited information on the dietary patterns and nutrient intake, so that this connection remains to be explored. Future studies should include detailed dietary histories and food diaries to further understand whether diet has the potential to moderate the effect of the gut bacteria on behavior in children with ASD. New findings could lead to improvements in using diet as a intervention to treat some symptoms of ASD.