The journey of Campylobacter: a genomic analysis of a successful zoonotic pathogen

Campylobacter is the leading cause of human gastroenteritis worldwide. Domestic and wild birds are likely zoonotic vectors of Campylobacter. We demonstrated that American crows, abundant in urban, suburban, and agricultural settings, carry multiple Campylobacter genotypes that are passed on to their own off-spring. The capability to distribute to other animals depends on the particular Campylobacter genotype. Contact and proximity to humans and livestock increases the potential spreading of Campylobacter via crows between the environment, livestock, and humans. We observed a critical link between public health and genomic variation of Campylobacter. Using whole genome sequencing (WGS), we evaluated the genotype that enabled zoonotic transfer and pathogenic potential of Campylobacter from crows to other animals in 184 isolates obtained from crow, chicken, cow, sheep, goat, human, and non-human primates. 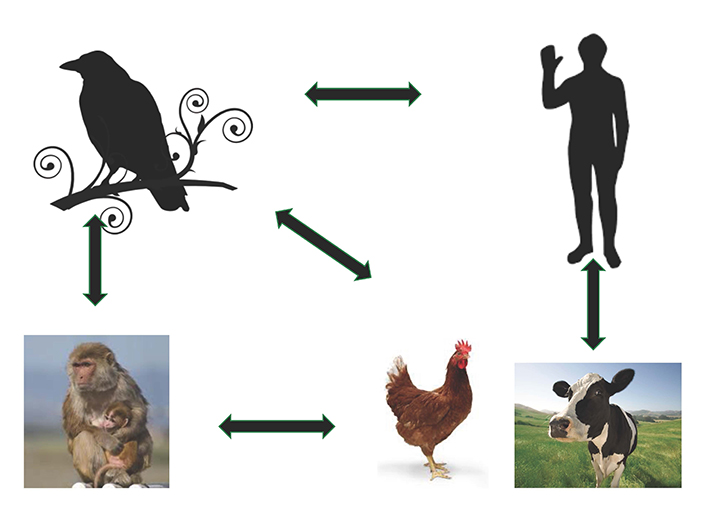 Methods to estimate the potential for zoonotic exchange in ecological settings that link disease and host range were lacking to provide the necessary resolution to measure this important event. This study showed that WGS comparisons accurately classified the genome characteristics to define a transferable (i.e. zoonotic) genotype and a host adapted genotype resulting in two main clades: the ‘crow only’ clade not associated with livestock disease and the ‘generalist’ clade that contained genomes from multiple hosts many of which were linked to disease (gastroenteritis, GBS, or abortion) in mammals.

Segregation of virulence genes with very specific alleles was also observed, in spite of distribution of these genes across all of the genomes. Specifically, a toxin gene that is associated with disease, cdtC, alleles segregated by crow only and generalist clades. Remarkably, all of the isolates that caused abortion in livestock contained the identical cdtC allele and this allele was not found in any other isolate, suggesting that this specific cdtC allele was unique to this livestock disease.

Using WGS antibiotic resistance comparisons from all of the Campylobacter genomes in the study we found that mutations in gyrA, indicative of fluoroquinolone resistance, were observed in 14% of the isolates that did not segregate with host range. However, two major β-lactamase genes that differentially segregated with ‘crow only’ genotype (oxa-184) and the zoonotic generalists (oxa-61). We also observed an enrichment of tetracycline resistance (tetO) occurred and was found in 91% of the isolates that caused abortion. These observations, surprisingly, strongly indicate that antibiotic resistance is being concurrently selected for disease even without the use of therapeutic antibiotics.

These results expand the genetic methods that provide information at the appropriate resolution to differentiate genotypes that are likely to move between species of animals, which has important implications for the ability of wild birds to disseminate Campylobacter throughout a large geographic area. By coupling WGS with specific genome comparison, we developed a method that demonstrates co-evolution and movement of genotypes with genetic features tied to antibiotic resistance and specific alleles of virulence factors to predict the zoonotic and pathogenic associations. The generalist genotype is predictive of clinically important antibiotic resistance and disease transmission dissemination of Campylobacter that represents a risk to human and animal health.