The Neuromuscular Junction: a core interpreter in the nerve-muscle dialog

Muscle and nerve communicate at the level of a specialized region, namely the neuromuscular junction (NMJ), a synaptic connection where the peripheral nervous system contacts skeletal muscle fibers, governing crucial vital processes, such as body voluntary movements and breathing.

NMJ is composed by four major elements: the presynaptic region containing the nerve terminal, the synaptic cleft, the postsynaptic surface referred to as the endplate, and the synapse-associated glial cells also called Perisynaptic Schwann Cells (PSCs) (Fig. 1). An additional junctional cell type element is a fibroblast-like cell, named kranocyte, which lies outside the synaptic basal lamina, caps the NMJ above the perisynaptic Schwann cells and extends its cytoplasmic processes over the end-plate area (Fig. 1). 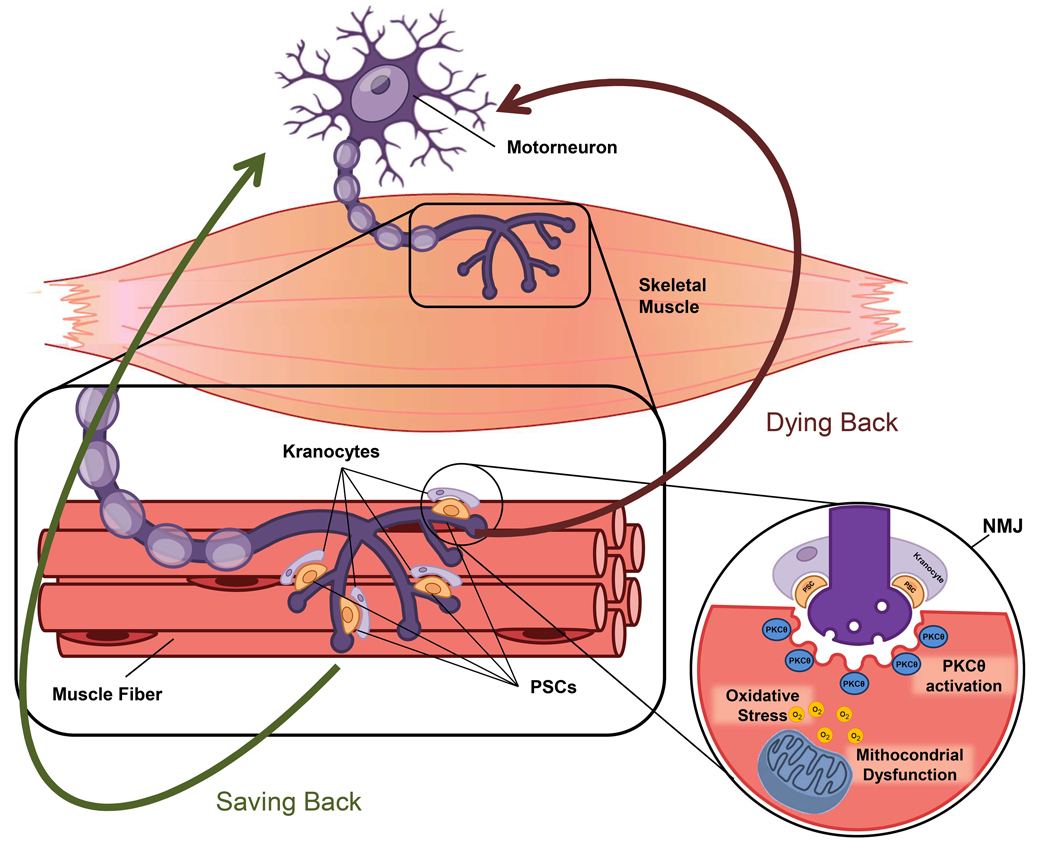 Fig. 1. A schematic representation of the main components of the neuromuscular junction (NMJ). NMJ development, remodelling, and stability is influenced by different signals and cells.
Alterations at the level of skeletal muscle and NMJ can trigger retrograde motor neuron degeneration in a sort of “dying back” phenomenon. Pharmacologic approaches directed to stabilize NMJ morphofunctional properties and to preserve muscle and NMJ integrity might activate a “saving back” process that counteracts motor neuron impairment and muscle-nerve dysfunction.

Several pathologic conditions are characterized by structural changes in NMJ that might contribute to neurotransmission failure and altered functionality, resulting in muscle weakness, altered motor neuron activity, loss of muscle fibers, and in severe pathologies even paralysis.

Among these, the Amyotrophic Lateral Sclerosis (ALS) is a paradigmatic example of pathologic condition in which muscle and nerve communication is compromised. ALS has been considered for long time a motor neuron disease, characterized by motor neurons degeneration, muscle atrophy, weakness and, ultimately, muscle paralysis with respiratory failure. The obvious loss of motor neurons in the spinal cord initially focused attention on how ALS related mutant genes may act within motor neurons to provoke neuronal degeneration and death. However, the mutant gene products are widely expressed, raising the possibility that the toxic cascade may be achieved wholly or in part by mutant protein action in non-neuronal cells.

Indeed, it has been demonstrated that an early pathologic sign observed in ALS is the morphologic alteration of NMJ, which preceed motor neuron degeneration.

Recently, it has been revealed that a protein, namely Protein Kinase C theta (PKCθ), physiologically involved in redundant synapses elimination during development, is aberrantly activated in ALS mouse models, and it is responsible for NMJ dismantlement in ALS disease. PKCθ also plays an important role in skeletal muscle metabolism inducing a shift of muscle fibers from a glucose metabolism to a lipid one. Therefore, in this context PKCθ can be considered a molecular link between muscle metabolic adaptations and NMJ alteration in ALS disease. Indeed, inhibition of PKCθ activity was sufficient to rescue the morphological complexity of NMJ, to stabilize AChR turnover, and to improve the morpho-functional properties of skeletal muscle in an ALS mouse model.

How muscle and NMJ send retrograde signal? Skeletal muscle has been identified as an endocrine organ, which produce and secrete growth factors, cytokines and peptides, collectively indicated as myokines, that make muscle capable to communicate with other tissues and organs, including bone, intestine, adipose tissue, liver, pancreas, and brain.

In this context, alterations in skeletal muscle, induced by different factors and conditions such as oxidative stress, physical inactivity, impaired nutrition, metabolic alterations, genetic diseases, and many others, might stimulate the production and secretion of factors that impinge NMJ architecture and consequently motor neuron stability and function, supporting the “dying back” paradigm (Fig. 1).

Thus, it is reasonable to speculate that interfering with the pathways and factors that impinge nerve-muscle interplay, we promote the maintenance and stability of NMJ, promoting a sort of “saving-back” process, proximally toward the cell body.