The importance of the NO-synthase(NOS)/soluble guanylyl cyclase (sGC) signaling for health and disease is undisputable (Nobel Prize in Biology and Medicine, 1998). Many studies demonstrated that this pathway is critically implicated in the regulation of cardiovascular, nervous, gastrointestinal and immune systems, and elsewhere. It is widely believed that, in vivo, the constitutive NOSs produce NO-gas which freely diffuses through tissues to react with the heme-containing enzyme sGC, forming the active NO-heme-sGC complex. Despite 30 years of research efforts, however, several fundamental aspects of this highly appreciated pathway remain illusive. The critical look on the problem reveals that the NO-gas signaling paradigm is based on a number of indirect evidences. Moreover, the central idea of constitutive NOS(s) being the generator of free NO-gas can be questioned. While in pure chemical system, NO can be detected at pM concentrations, it is impossible to detect the physiological NO levels. The quantitative link between NO levels and physiological response is lacking. Theoretically, it is difficult to explain how the simple, diffusiable and reactive molecule NO is able to performe so many specific physiological functions. The lack of practical outcome of NO-field (eg new diagnostics and drugs) can further increase doubts on the validity of the NO-gas signaling dogma. 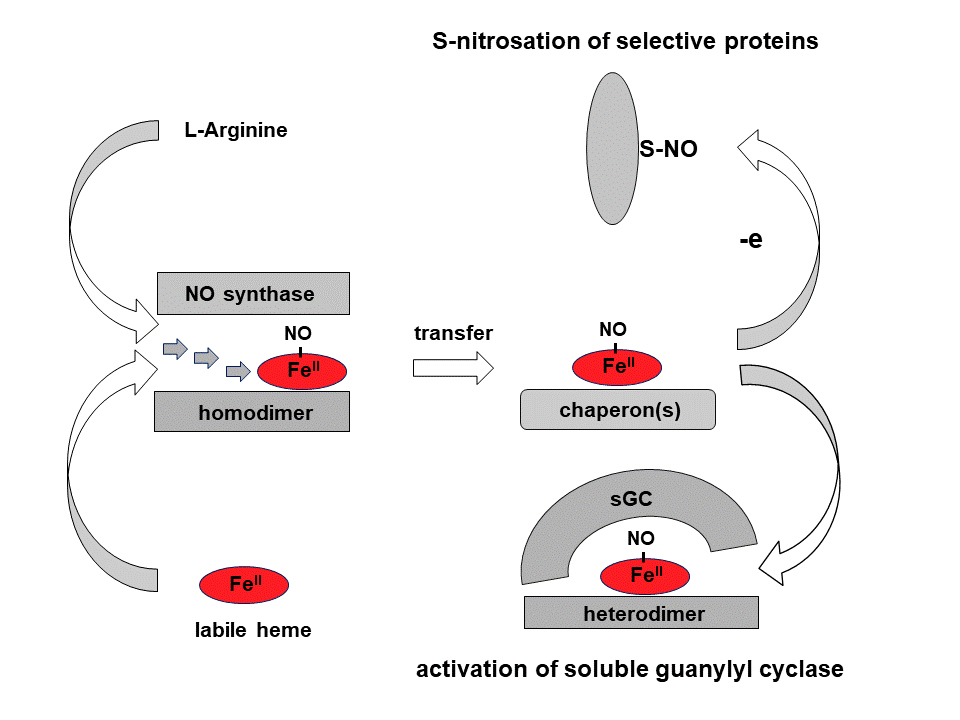 In early days of sGC research (1980-1986), the Nobel Prize winner Louis Ignarro had shown that different nitrosylated-hemoproteins can efficiently donate the NO-heme entity to activate the purified sGC. Unfortunately, this sGC activation mechanism has never been put in a physiological context, and probably was completely forgotten due to the overwhelming enthusiasm on NO-gas signalling concept. The recent findings on dynamic association-dissociation behaviour of NOS homodimers, NOS co-localization with globin proteins and emerging role of the regulatory heme pool, have prompted the author to generate the NO-heme signalling hypothesis (Fig. 1). The essence of this hypothesis is that, in whole cell, the constitutive NOSs generate mobile/exchangeabl NO-heme signalling species rather than free NO-gas. In contrast to NO-gas, mobile NO-heme species can ensure safe, efficient and coordinated delivery of the signal within and between cells. The mobile NO-heme species can be a subject of safe redox regulation, can be specifically delivered to different molecular targets, can be formed and stored without intermediacy of free NO and more resemble classical neuromediators. The proof of the NO-heme signalling hypothesis is challenging and potentially rewarding issue which gives a hope for the development of new diagnostics and therapeutics in multiple conditions where the critical role of NOS has been implicated.