The origin of the HIV-1 epidemic

The epidemic of human immunodeficiency virus type 1 (HIV-1), the causative agent of AIDS, is one of the world’s major public health problems, with around 37 million people currently infected with this virus. The HIV-1 epidemic originated in Central Africa from a virus transmitted from chimpanzees to humans around 1920, which through mutations and recombination has diversified extensively into numerous variants, named subtypes and circulating recombinant forms. 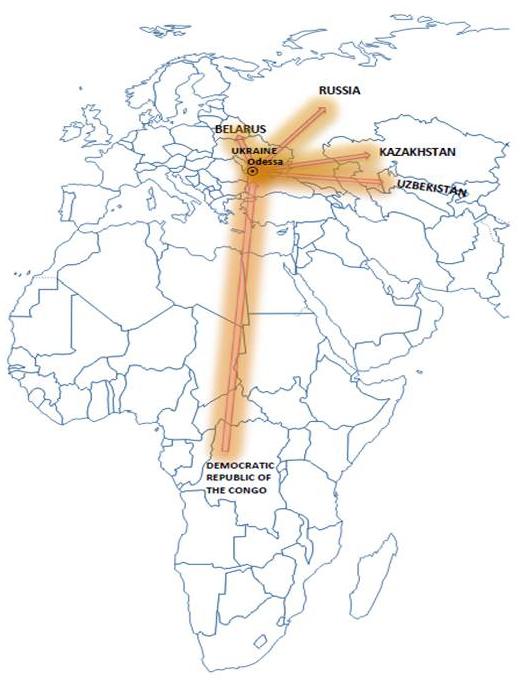 Fig. 1. Migration of the ancestor of the subtype A variant dominating the HIV-1 epidemic in FSU countries from the DRC to Odessa, Ukraine, with subsequent diffusion to other FSU countries.

The HIV-1 epidemic was first recognized in 1981 in the United States, where the dominant variant is subtype B, which subsequently spread to Western Europe and elsewhere. However, in countries of Eastern Europe and Central Asia formerly part of the Soviet Union, the predominant HIV-1 genetic form is a subtype A variant. This variant began spreading among injecting drug users (IDUs) in late 1994 in the Ukrainian seaport city of Odessa and subsequently propagated to all East European and Central Asian countries from the former Soviet Union (FSU), for which it is often designated AFSU. In FSU countries, the number of people living with HIV-1 is around 1.5 million, with an increase in new infections from 2000 to 2014 of 30%, which is the greatest regional increase in the HIV-1 epidemic during this period. The origin of AFSU has been controversial, with two competing hypotheses having been proposed, one placing it in the Democratic Republic of Congo (DRC), in Central Africa, and the other in the Republic of Guinea (RG), in West Africa. These hypotheses were based on phylogenetic analyses showing that the sequences of two viruses collected in the DRC and one collected in Italy, from an individual recently immigrated from the RG, were closely related to the viruses of the AFSU variant. In the new study, a different method was employed, based on Bayesian probabilities, in which sequences from subtype A viruses with known sampling year collected in different African and FSU countries were used to estimate the temporal and geographical origin of the AFSU variant and its most probable migration routes. In these analyses, it was estimated that AFSU had its ancestry in the DRC, with a probability of 94%, which contrasts with a probability of only 0.03% for an origin in the RG.

The analyses also confirmed Odessa as the epicenter of the AFSU epidemic, in agreement with the known epidemiological data, with well-supported diffusion pathways to other cities of Ukraine, Russia, Belarus, Kazakhstan and Uzbekistan. With regard to the temporal origin of AFSU, it was estimated that the earliest time of migration from DRC to Odessa was around 1970 and that AFSU began spreading via heterosexual contact in Odessa about a decade before its explosive expansion among IDUs in 1994. No particular historical event could be associated to the migration of the AFSU ancestor from DRC to Ukraine, which could be a chance phenomenon, similar to the migration of other African HIV-1 variants to different non-African countries. Subsequent events, such as the deterioration in socioeconomic conditions following the disintegration of the Soviet Union in 1991 and the establishment of drug trafficking routes departing from Afghanistan, could have created the optimal conditions for the rapid diffusion of AFSU from Southern Ukraine to other FSU countries. Therefore, these results provide new information on the origin and diffusion pathways of the HIV-1 variant that dominates the HIV-1 epidemic in East European and Central Asian countries formerly part of the Soviet Union, which may be of interest from historical and public health points of view. The knowledge gained from these studies may be useful for the implementation of public health measures aimed at containing the present HIV-1 epidemic and preventing future ones.