Fats are an integral part of many food products, contributing to texture, flavor, and satiety aspects. In general, fats exist as a mixture of both solid and liquid triglycerides, where the solid fraction assembles into crystalline domains which form a three-dimensional network, immobilizing the liquid oil. The structure and packing arrangement of the solid triglyceride molecules directly impacts properties such as the melting profile and overall functionality. Milk fat (MF) has a particularly diverse composition among dietary fats, giving rise to a range of unique physicochemical properties. There are three major packing arrangements (or polymorphs) the crystal lattice of MF can adapt, which have been denoted the α, β’, and β. The α form is the least stable, and readily transforms into the more stable β’ polymorph. In contrast, the β form is the most stable and densely packed form, but is generally inhibited in MF due to variation in fatty acid chain lengths, and the presence of double bonds which form “kinks” in the fatty acid structure. 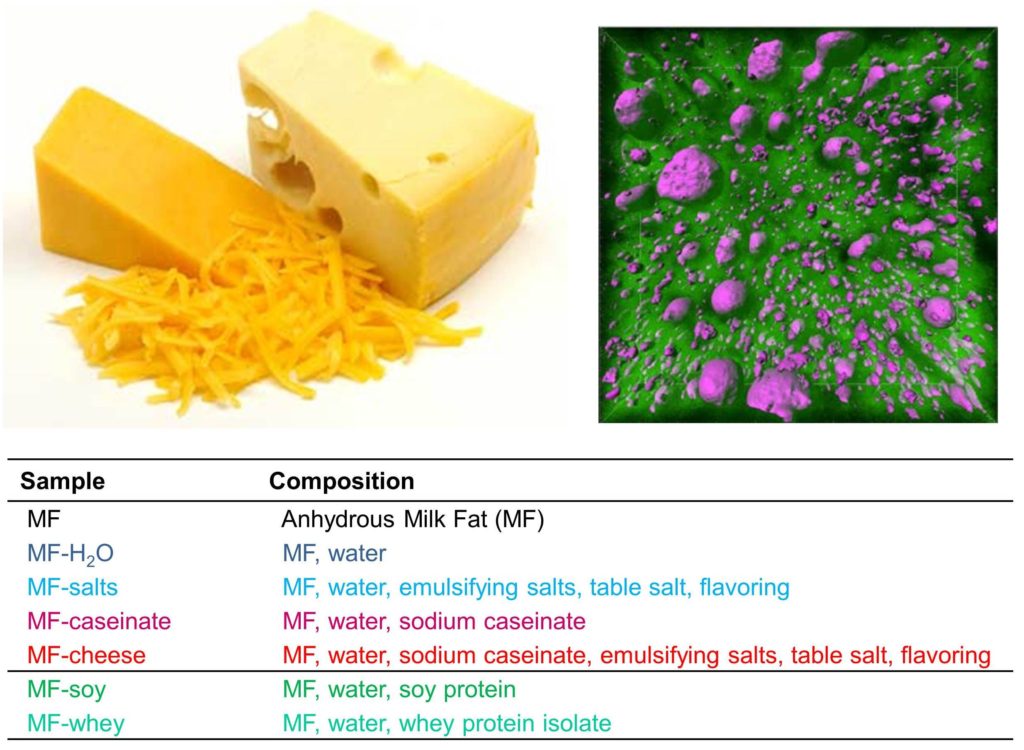 Identification of the polymorphic form is commonly carried out via X-ray diffraction. Each polymorph will produce a distinct set of peaks in the diffraction pattern, and if more than one packing arrangement is present, the peak intensities can be used to qualitatively interpret the relative populations. However, most studies have focused only on the isolated forms of anhydrous milk fat or dairy cream alone, and not in the context of a food matrix. In cheese products for example, MF exists as discrete globular droplets dispersed throughout a protein gel (see Fig. 1), and our previous work has indicated that MF in processed cheese products has a higher β/β’ ratio than bulk MF. Therefore, the goal of this study was to determine if the physical confinement and interaction with a cheese matrix might influence the polymorphic form of the solid fat, and thus its functionality.

Fig. 2a shows the melting profiles of bulk MF, MF emulsified in water or a salt solution, and MF dispersed in a sodium caseinate gel or the full model cheese matrix (see Table in Fig. 1 for composition). Both the bulk MF and emulsified MF show a number of sharper, more pronounced melting peaks, which can be divided into the low- and mid-melting fractions (0-22°C) and high-melting fraction (24-42°C), respectively. The peaks arising from MF dispersed in the protein systems are less pronounced, but can still be distinguished as low/mid-melting and high-melting fractions. No melting peaks were identified in a control sample where MF was replaced with liquid canola oil (Fig. 2a, bottom curve). 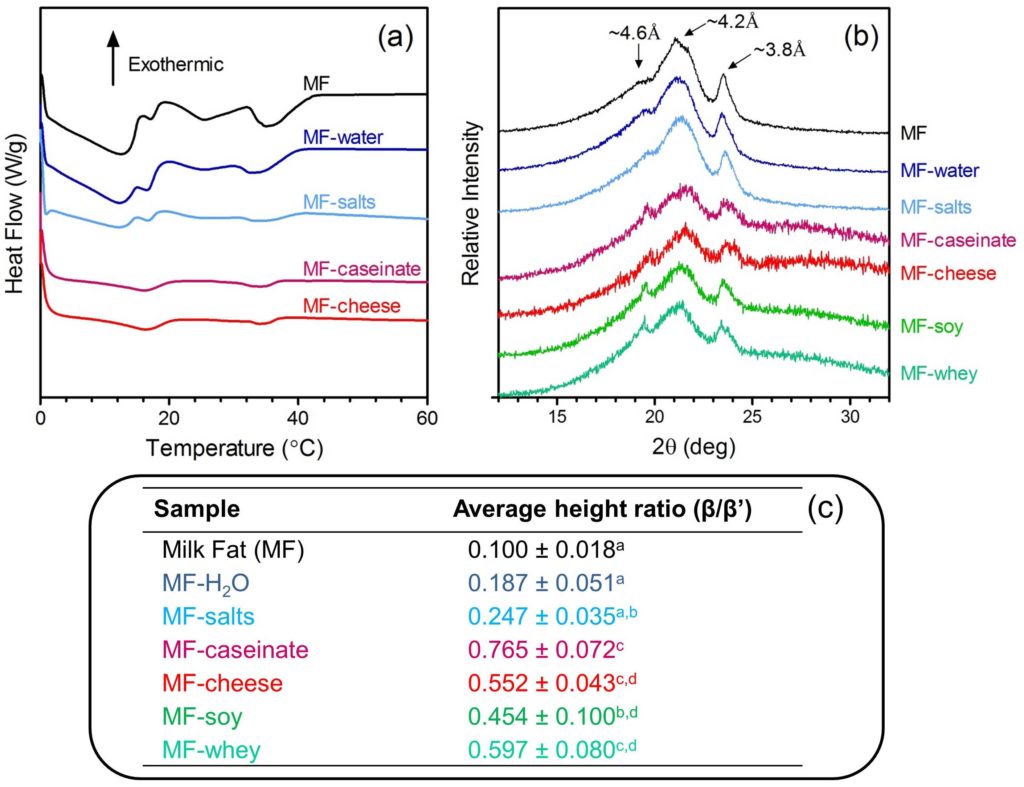 Fig. 2. (a) Differential scanning calorimetry melting profiles and (b) wide angle X-ray diffraction patterns (b) of milk fat (MF), MF with water or salt solution, and MF dispersed in a casein protein gel or full model cheese matrix (see Table in Fig. 1 for composition details). The peaks at 4.6Å and 4.2Å respectively correspond to the β and β’ polymorphs, while the peak at 3.8Å is associated with both forms. The proportions of β/β’ polymorphs from the various diffraction patterns are reported in (c), based on the relative peak intensities.

Figure 2b shows the wide angle X-ray diffraction patterns of the same samples, where the dominant peaks corresponding to intermolecular spacings of ~4.6Å and 4.2Å were used to quantify the β and β’ polymorphs, respectively (Fig. 2c). The bulk MF predominantly crystallized in the β’ polymorph (Fig. 2c) while the emulsified MF and MF within a caseinate or cheese matrix displayed a higher proportion of the β polymorph, suggesting that confining MF into droplets encouraged the formation this more stable polymorph.  Dispersing MF in either soy or whey protein gels demonstrated that the nature of the gel did not drastically impact the β/β’ ratio, further suggesting the physical confinement of MF in a protein network was the main driving force encouraging the formation of the more stable β polymorph in a model processed cheese. These findings indicate that dispersing MF in either a liquid or gel matrix can influence the packing of TAGs within their crystals, and thus melting properties of the fat, which can in turn impact the functionality and quality of MF-containing food products.

Insights into the mechanism of the formation of the most stable crystal polymorph of milk fat in model protein matrices.
Ramel PR, Marangoni AG
J Dairy Sci. 2017 Sep