The pitfalls of PGT-A and scoring of mosaic embryos 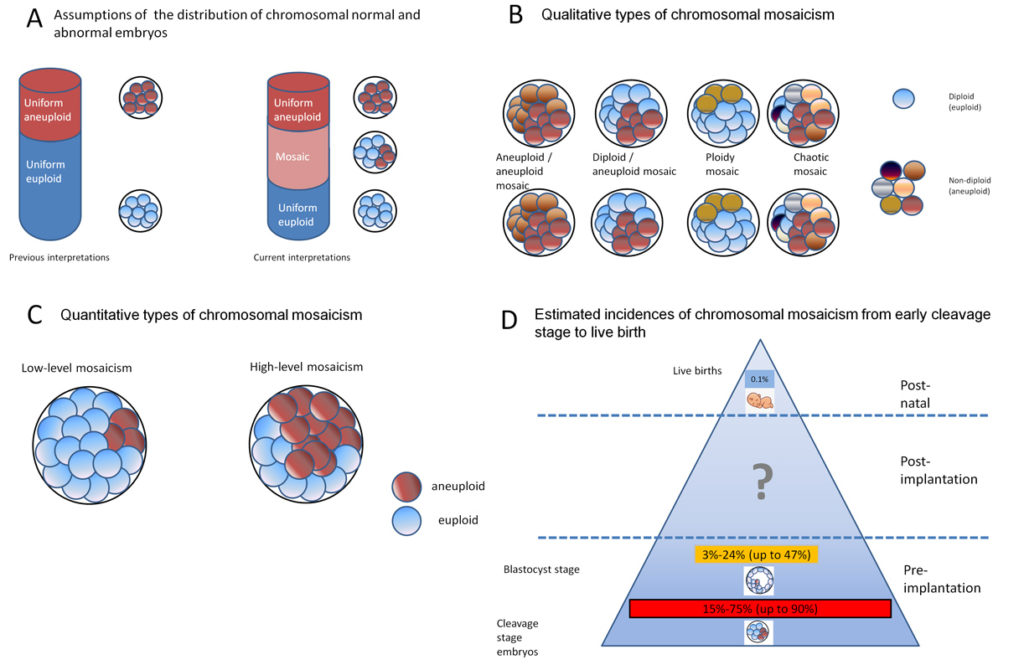 Since its introduction, PGT-A has undergone several improvements. First, timing and methods of biopsy were optimized. Instead of removing a maximum of two cells from the cleavage embryo, 5-10 trophectodermal (TE) cells of the expanded blastocyst are now biopsied. This increased the number of biopsied cells to achieve a larger amount of DNA and the procedure proved to be less invasive. Analytical techniques have improved as well. Array CGH and, later, next generation sequencing (NGS) technique was implemented, allowing the rapid analysis of all chromosomes with a high resolution of chromosomal regions. However, this is in sharp contrast to the lack of (scientific) evidence regarding the benefit of PGT-A.

It was probably the NGS-technique itself which revealed the major aspect for the failure to provide proof- of- principle for the reliability of PGT-A: It became evident that human preimplantation embryos might not entirely consist  of euploid or aneuploid cells, but may as well contain both euploid and aneuploid cells. Such embryos are then referred to as mosaic embryos (Fig. 1).

It is estimated that up to one half of in-vitro blastocysts show chromosomal mosaicism due to mitotic errors during the first cell cleavages. A high probability of chromosomal mosaicism is suggested not only in cleavage stages, but also in blastocysts. In contrast to preimplantation embryos, chromosomal mosaicism is an extremely rare event in live births (Fig. 1). This might be due to depletion or repair events in the developing embryo which reduce the likelihood of mosaicism transmission to the offspring. However, to date, it is not possible to predict the fate of aneuploid cells in mosaic embryos. Considering the different genetic constitution of cells in the blastocyst, it is unclear whether the 5-10 biopsied cells will represent the true chromosomal constitution of the blastocyst and later embryo (Fig. 2A). Currently, it is difficult to answer the question of how to handle this early embryonic mosaicism since both the origin and the consequences are still largely unknown. A general discarding of mosaic blastocysts would strongly reduce the number of transferable embryos, as it might involve the loss of healthy embryos, whereas the transfer of mosaic blastocysts might result in implantation failure, miscarriage, or either the birth of a healthy child or a child affected by health impairments ranging from minor through to severe.

The latest approach to deal with this dilemma consisted in transferring mosaic embryos as “second-choice” when, based on specific scoring systems, no fully euploid embryos were available. Four scoring systems were published. (Fig. 2B). However, all attempts show severe shortcomings.

We want to emphasize that at this stage, there is insufficient understanding of the regulatory mechanisms on the cellular level in the embryo, mosaicism being one of them. PGT-A is not evidence-based and leads to considerable financial and emotional burdens In addition, the scoring of mosaic embryos does not resolve current problems: These issues should form an indispensable and integral part of patient counseling.