Prostate Cancer (PCa) is the most common oncological disorder in men worldwide, mainly affecting individuals over the age of 50. Therefore, the population aging and the improved expectancy of life have been contributing to the increased incidence of this type of cancer in the last decades. Despite the multiple research efforts of clinical and laboratorial researchers to develop more effective diagnostic and therapeutic approaches, it remains a challenge to find out new and better approaches to diagnosis and treatment of this terrible disease. 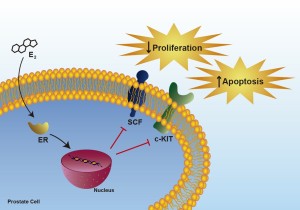 The development and progression of PCa depend on multiple factors, with sex steroid hormones playing a relevant role, namely, the classical male hormones, androgens. These steroids are important for prostate development since the embryonic period, and also have been described as causative agents of PCa. Although in smaller quantities, males likewise biosynthesize the female hormones, estrogens, which also have been implicated in prostate carcinogenesis. However, a duality in the role of estrogens in prostate has gained consistency over the last years. If some studies accuse estrogens of being causative agents of PCa, other identified these steroids as protective factors for this human disease.

Estrogens exert their effects by modulating the gene expression pattern in cells and tissues, and it has been shown that these hormones regulate the expression of tyrosine kinase receptor c-KIT and its ligand the stem cell factor (SCF). This ligand-receptor system has an important role in stimulating proliferation and suppressing apoptosis, and was recently implicated in prostate carcinogenesis. Nevertheless, it is not known whether estrogens modulate the expression levels of SCF/c-KIT in prostate cells.

We investigated the role of 17β-estradiol (E2), the most potent estrogen, in regulating the expression SCF and c-KIT in PCa cells and rat prostate. E2 decreased the expression of both ligand and receptor in PCa cells in vitro as well as in rat prostate in vivo. The down-regulation of SCF/c-KIT system by E2 suggested that proliferation and apoptosis of prostatic cells would be altered. This hypothesis was confirmed by the decreased prostate weight and the reduced proliferation index found in the E2-treated group comparatively with the controls. Moreover, the diminished proliferation was accompanied by an increase in apoptosis, a mechanism of programmed cell death.

The results of this investigation demonstrated that estrogens can down-regulate the SCF/c-KIT system in prostate cells, with antiproliferative and proapoptotic effects, which supports the protective role of estrogens against PCa. Moreover, this work opened new perspectives on the application of estrogen-based therapies in PCa.