Reconfigurable and tuneable wireless devices are the ultimate goal of all generations of wireless technologies – starting from the first generation all the way to the current, fifth generation. And the interest is ever growing. It is primarily driven by the need for efficient hardware, reuse of resources and real estate, and the enablement of a range of applications using one single device. Here, reconfigurability refers to the ability of the Radio Frequency (RF) wireless device to attain the function required by the system or external factors. For example, an RF antenna can be turned into an RF filter, a reflector or a simple transmission line. Tunability, however, refers to the possibility of a particular RF device (antenna for example) to alter its response under external influence. For decades, tuneable RF devices have benefited from the advances in semiconductor technologies, resulting in hybrid RF devices, with examples encompassing phase shifters, tuneable antennas, filters and attenuators. 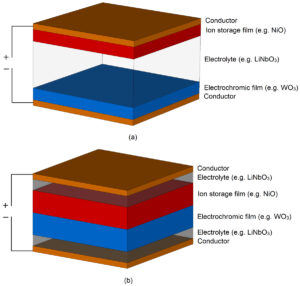 The addition of a semiconductor (diodes, transistors) to standard RF devices would result in the perturbation of Electro-Magnetic (EM) fields upon the application of a low frequency bias voltage and, hence, a change in the characteristics of the RF device (frequency of operation, radiation characteristics, to name but a couple). The main drawback of this approach lies with the fact that the addition of a semiconductor device does not change the fundamental properties of the substrate upon which RF devices are built, indicating its limited use. For RF devices to be tuneable, the substrate upon which it built needs to possess the ability to be changed upon external influence, usually dc voltage.

In the past three decades, LCs have emerged as a potential candidate for tuneable RF devices, due to their lower values of relative dielectric permittivities (between 2 and 4)  and lower tuning voltages compared to ferroelectric materials (up to 10V). However, the fact that their insertion losses are moderate to high and that their tuning ratio is rather low (up to 20% -30%) and that they do not possess open circuit memory precludes their use to a limited number of devices.

EC materials are, however, relatively new to the field of tuneable RF substrates. They have, however, been extensively used in the optics field, due to their inherent capability to change colour upon the application of dc bias voltage. They have been shown to possess several attractive features compared to ferroelectrics and LCs. For example, in addition to their tuneable optical characteristics, their relative dielectric tunabilities can be tailor-made (depending on the substrate thickness), they exhibit open circuit memory and have tuning range of over 65 %. It is evident from the above that EC materials appear to hold an upper hand over ferroelectrics and LCs, however, more research work is needed so as to discover their true potential.  Figure 1 shows a standard EC cell (a) and an enhanced EC cell (b) for increased dielectric tunability. Figure 2 shows the distribution of the electric field on enhanced EC cell at 1 GHz.