Hand-arm vibration syndrome (HAVS), previously known as vibration white finger, may be difficult to diagnose. It manifests in two forms – vascular with blanching of the fingers or sensorineural with tingling, numbness and loss of dexterity of the fingers. Patients may experience one or both forms of the disease. The Health and Safety Executive recommends in Guidance L140 that workers with stage 2 (late) HAVS should not be exposed to further vibration so as to stop them developing a more disabling form of the disease.

Blanching of fingers in a way that is characteristic of HAVS can be confirmed by a contemporaneous photograph, but this will not differentiate between blanching due to vibration and other causes. Standardised tests which involve provocation of symptoms by immersing the hands in cold water and recording changes in temperature or blood pressure measurements in the fingers are used in some centres to demonstrate abnormal vascular responses, but they will not distinguish between the different causes.  Neither is there evidence that the standardised tests can be used to accurately classify a patient’s blanching according to a clinical classification called the modified Stockholm stage. 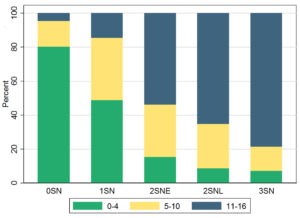 The current clinical classification of HAVS is known as the modified Stockholm Scale which classifies blanching according to the extent and frequency of the blanching from stage 0 to stage 4 (most severe). The extent can be confirmed by photography but the frequency is self-declared. If the declared frequency of blanching is less than three per week the worker is classified as stage 2V (early) and if it is more than three per week as stage 2V (late). It follows that any worker wanting to continue working with vibrating tools may choose to report less than three attacks of blanching per week and any worker wanting to stop working with vibrating tools or to pursue a claim for compensation may choose to report more than three attacks per week. Furthermore there is no scientific rationale to justify this cut-off which is subjective.

The modified Stockholm scale divides sensorineural HAVS from stage 0 to stage 3 (most severe). Stage 2 sensorineural HAVS is further divided into early and late according to the duration of the numbness or tingling in the fingers. If it is reported as being less than two hours it is classified as stage 2 (early) and if more than two hours as stage 2 (late). This too is subjective, liable to bias and not based on any scientific evidence.

279 cases of HAVS attending the Health and Safety Laboratory in Buxton for standardised testing were analysed. Although there was a significant trend for sensorineural (SN) and vascular scores to increase with clinical stage (p < 0.01), there was no significant difference in scores between 2SN early and 2SN late, or between 2SN late and 3SN (Fig. 1). There was moderate correlation between the thermal and vibration scores and the clinical sensorineural stages (r = 0.6). Cold provocation scores correlated poorly with clinical staging (r = 0.2).

The diagnosis of HAVS is challenging and laboratory tests have their limitations. Assessment of cases should include careful history taking, skilled examination and the use of a range of tests such as thermal and vibration perception, nerve conduction tests and vascular imaging of the hand to inform diagnosis. The current classification of HAVS is also subjective and liable to bias. It could be improved by developing an evidence base to support clinicians to distinguish between the stages.