The right tool for the right job – it is brain surgery after all!

Getting drugs into the brain to help treat cancer or neurological diseases like Parkinson’s or Alzheimer’s is pretty difficult. Generally speaking you can’t just take a pill or get an injection as the brain is protected by the blood brain barrier (BBB), a type of mesh that holds back the big molecules (like many pharmaceutical agents) but let’s in smaller ones like oxygen, alcohol etc. only around 1% of the drug which is injected gets into the brain, and this isn’t usually targeted to any particular part of the brain which might need it the most. 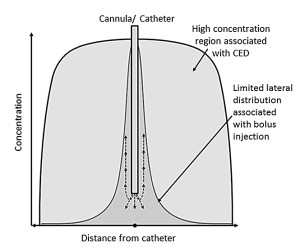 Fig. 1. Graphic depiction comparing the distribution associated with Convection-Enhanced Delivery (CED) and bolus injection (reproduced and modified from (Lam et al. 2011). Note that the region of high concentration has spread laterally a much larger distance from the catheter than simply injecting a bolus which is the signature of CED.

While lot of people are trying to develop neat ways to trick the body into letting drugs pass the BBB and others are trying to get drugs to get actively taken past this barrier, a method that has been used in research for around 20 years is to put a catheter straight into the brain and deliver the drugs directly.

While this approach seems the most risky as it involves surgery, in many respects it’s actually the simplest and comes with a host of benefits. Direct delivery can dramatically lower the amount of drugs that are given compared to injections so systemic effects are minimised or eradicated. This would be really useful in cancer suffers who often experience hair loss, nausea and lots of other nasty side effects from the large volumes of poisons that are injected to try and knock out tumours.

Despite the potential benefits, only a handful of centres are investigating this method at a research level, no one is offering it as a treatment yet. This is because the hardware (particularly catheter systems) and knowledge do not exist to allow clinicians to investigate new drugs. In recent years some useful cannula designs have come on the market for intra-ventricular use and these are being used off label to investigate new uses in CED. These devices are used to deliver small amounts of fluid to the brain at single time points. While this is useful for some investigational treatments like viral vectors (gene therapies), other indications which might benefit from multiple infusions are left needing a system to allow delivery over longer periods of time, or even repeat doses at monthly intervals.

Some implantable pumps exist but are bulky and can currently only connect to one catheter, limiting the amount of brain that can be covered.

There is currently an investigational system which is being developed at Bristol in the UK and used in a clinician led study of Glial Cell-line derived Neurotrophic factor (GDNF) for the treatment of Parkinson’s disease. While this is investigational it is hoped that with favourable outcomes this may pave the way for a commercially available intermittent delivery system for oncology and neuro-degeneration indications in the near future.

At present there is a very limited understanding of the parameters which will help healthcare professionals investigate new drugs and treat patients with neurological conditions. More work is required to broaden and deepen the knowledge of how these catheter systems can be implanted for long periods of time in patients and how to optimise them once they are there. In this way it will hopefully be possible to give the healthcare profession a platform to deliver drugs to help treat neurological conditions which are currently untreatable.