The role of oxidative stress in Type 2 diabetes

Type 2 diabetes is a major health concern that affects people no matter their gender, race, or socio-economic background is. In type 2 diabetes, a person’s body stops responding efficiently to insulin after a meal. This desensitization occurs at the cellular level.

Normally in response to insulin, the cell will move more glucose transporters (GLUT4) to cell membranes to pull glucose from the bloodstream. This mechanism ensures the cells get the sugar the person eats instead of leaving it in the blood. 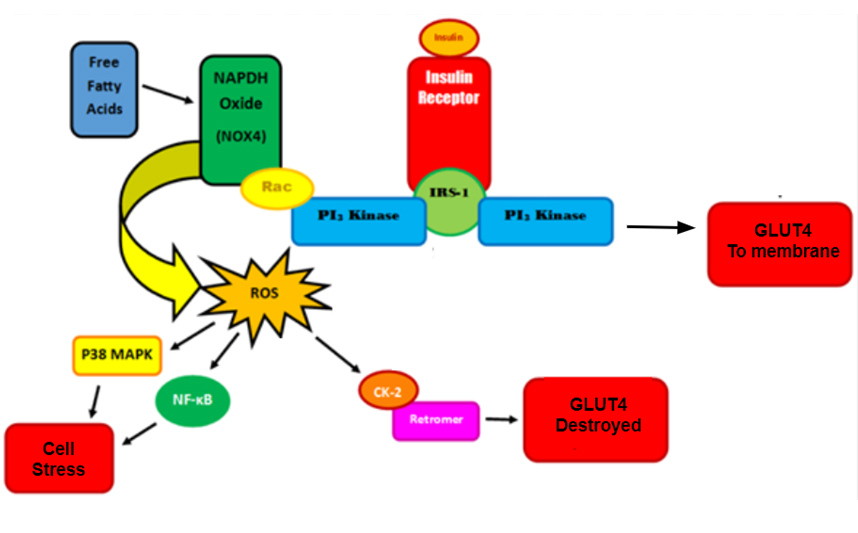 When glucose in the blood is excessive, more insulin is produced to bring blood sugar levels back to normal. Repeated increased insulin response turns on a second mechanism that produces oxidants and free radicals – reactive oxygen species (ROS). These molecules are damaging to the cell, but they also function as cellular messengers.  In response to repeated excess insulin, the oxidants tell the cell to reduce the amount of GLUT4 in the cell membrane. Thus, the cells lose sensitivity to insulin.

Antioxidants, e.g., vitamins C & E have shown promise in improving insulin sensitivity and even reversing Type 2 diabetes. They directly combat the oxidants produced in the cells. Vitamins C & E have shown great performance in recent studies in improving insulin sensitivity. Flavonoids, plant pigment compounds, also function as antioxidants. These antioxidants including vitamins C & E are found abundantly in fruits and vegetables. Thus, a healthy and varied diet that is low in sugar with abundant antioxidants could provide exceptional protection against oxidation in conjunction with maintaining proper body weight.