The safety and toxicology of cannabinoids 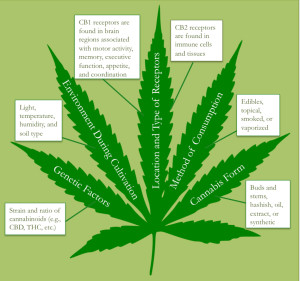 Marijuana or cannabis, colloquially referred to as weed, pot, grass, herb, bud, ganja, etc., is the most commonly used illicit drug both nationally and internationally. Roughly 180.6 million people worldwide report lifetime cannabis use and 24.6 million people in the US report past-month use. Although these numbers highlight the prevalence of marijuana use and emphasize the importance of implementing marijuana policy that aligns with scientific evidence about safety and efficacy, it has historically been difficult to study marijuana use in a controlled research environment. In 1999 the Institute of Medicine issued a report acknowledging the potential therapeutic benefits of cannabis, but calling for more research. That research has been difficult to complete due to marijuana’s Schedule I status. Researchers who study marijuana must have a DEA Schedule I license, approval from their institution, and funding. Many can obtain one or two, but obtaining all three is rare. In lieu of randomized controlled trials, many researchers must instead focus their efforts on retrospective cohort studies, case reports, and observational studies, which are prone to increased variability in study methodology and quality. This creates a circular situation wherein the classification of marijuana does not change because there is not enough high quality research to support the change. At the same time, the current classification limits the amount of high quality research that is produced.

Furthermore, research into cannabis is complicated by variability in cannabinoid content, method of administration, form of cannabis consumed, the lack of a standard dose unit, and the type of receptor involved (Fig. 1). These factors combined with the difficulty of completing controlled Schedule I experiments illustrate why the general consensus remains largely mixed and inconclusive, despite the large body of research.

Although there is some inconsistency in findings, the research to date illustrates general trends and suggests populations that may be more sensitive to negative effects of cannabis use. There are clear acute cardiovascular, respiratory, cognitive, psychological, and public health effects of cannabis use (Fig. 2). Additionally, persistent cardiovascular and respiratory consequences are fairly well documented in chronic smokers of marijuana. The evidence for other long-term consequences of cannabis are mixed, and likely influenced by age of first use, duration of use, frequency of use, cannabinoid content and potency, and co-morbid conditions. In addition, there is growing evidence for the potential therapeutic impact of cannabis. Specifically, cannabis can reduce spasticity associated with MS, decrease chronic neuropathic pain, and decrease nausea and vomiting in individuals undergoing chemotherapy. The therapeutic potential for the treatment of other diseases remains unclear and requires more research. Additionally, more research is needed to better understand the safety profiles, including the cognitive effects, so educated decisions can be made about the risk/benefit profiles of treatment with cannabis.

Fig. 2. The Long- and Short-term Effects of Cannabis Use.

Given these findings, one option for the future direction of research and policy on cannabis is to approach cannabis as a legitimate therapeutic agent. This would include reclassification, as well as more stringent and uniform supervision of its use and distribution in a safe, ethically, and scientifically justified manner. This would likely improve discussions of the risks, benefits, and uncertainties associated with cannabis use between physicians and patients. It would also clearly define vulnerable populations, in which medical marijuana should be avoided, including individuals under 25, individuals with current or past substance use disorders, individuals with a personal or family history of mental illness, those that have compromised cardiovascular, respiratory, or immune systems, and those who are pregnant. Such policies would allow for improved research and consequently a better understanding of the safety and efficacy of cannabis.