The SETOC: Visualizing carcinogenesis through a different lens

The Systemic-Evolutionary Theory of the Origin of Cancer (SETOC) is a recently proposed theory based on two fundamental principles: (i) Margulian evolution as a process of cooperation and endosymbiosis and (ii) Systemic cell biology understood as the integration of cellular modules or programs as occurs in any complex system. According to the SETOC, cancer can be viewed as the result of continuous attempts by cells to adapt (dynamic adaptation) to long-term injuries, resulting in tissue alterations, chronic inflammation, and fibrosis. This inappropriate response, or maladaptation, is accompanied by gradual breakdown of the “endosymbiotic contract” (“de-endosymbiosis“) between two major cellular subsystems: the nuclear-cytoplasmic (the primeval archaebacterial cell) and the mitochondrial systems (the primeval α-proteobacterium), featuring behaviors and functions no longer coordinated in the transformed cells (Fig. 1). 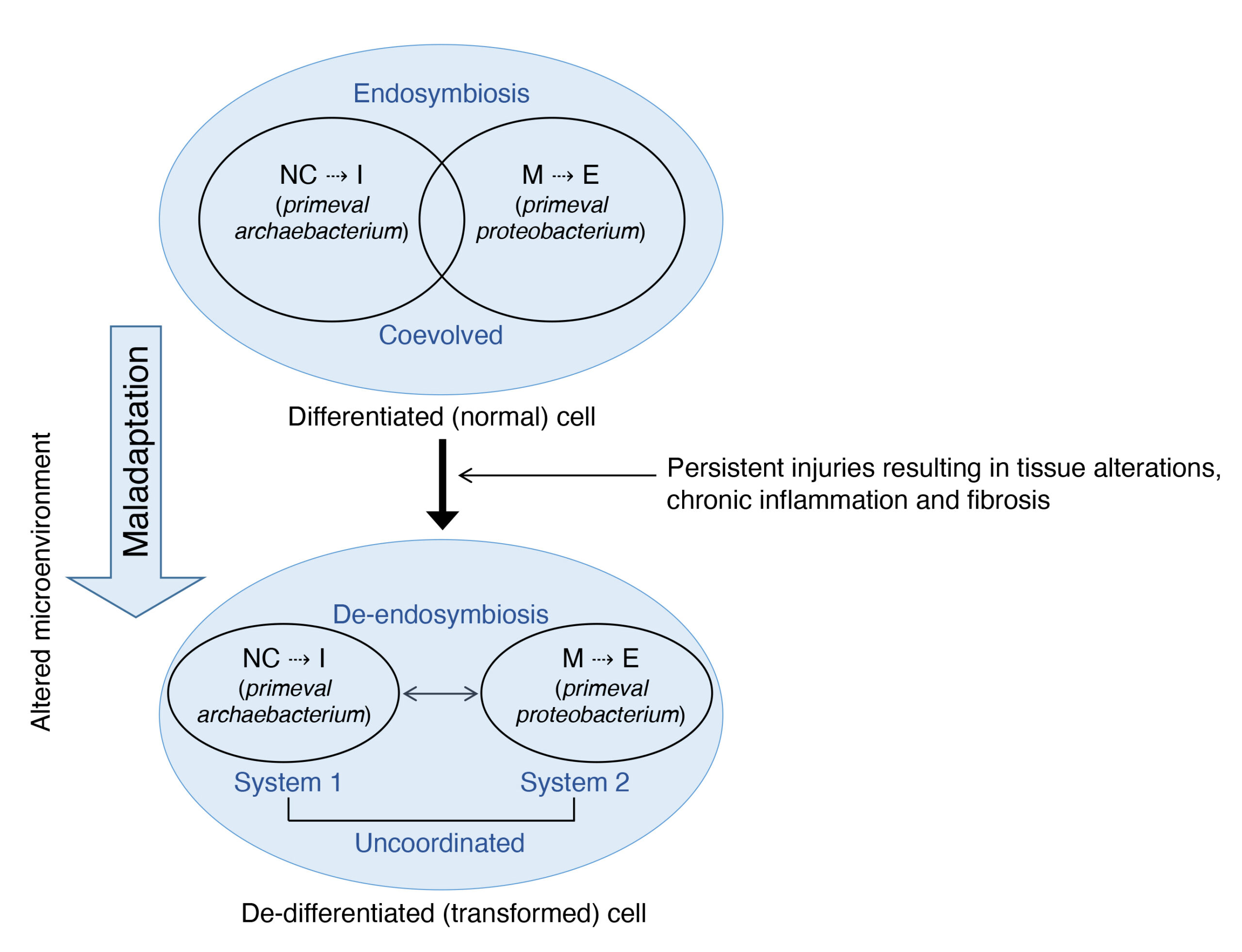 Fig. 1. In normally differentiated cells, endosymbiosis between the two major cellular systems, the information nucleus-cytoplasmic NC (ancestral archaeal cells) and the mitochondrial energy system M (ancestral α-proteobacteria), is essential to maintain the balance of the integrated cellular functions. As a consequence of a prolonged insult and constant attempts of cells to adapt to long-term injuries, the gradual breakdown of the “endosymbiotic contract” (“de-endosymbiosis”) leads over time to de-differentiated transformed cells (modified from Mazzocca A. 2019). NC = Nuclear-cytoplasmic system; I = Information; M = Mitochondrial system; E = Energy.

The first system mainly refers to (I) information (largely deriving from the archaebacterial ancestor), and the second to (E) energy (largely deriving from the α-proteobacterial ancestor). Specifically, the stepwise decoupling of these two endosymbiotic subsystems, which have coevolved in eukaryotic cells, generates alterations in cellular (lower) and tissue (upper) organization that are important driving forces of neoplastic transformation. Biological tissues can be thought of as “self-organized” structures that become ordered in space and time through emerging properties stemming from integrated systems of eukaryotic cells as a result of the ancestral “contract of endosymbiosis.” Additionally, the uncoupling of endosymbiosis is not only triggered by the adaptability of cells to changes in the external environment, but also by “intracellular adaptability” – which is the condition that tends to re-establish cellular homeostasis – to alterations of the internal cellular environment, for example, due to infectious agents (i.e., viruses), chemical carcinogens, drugs, hormones, and so forth. Over time, the progressive uncoupling of endosymbiosis leads to an evolutionary throwback, with the appearance (“de-emergence“) of phenotypic traits resembling those of unicellular organisms (“phylogenetic inversion“) and certain biological features of embryo development (“ontogenetic inversion“) (Fig. 2). These adaptive changes in cancer cells include survival in the harsh tumor microenvironment, characterized by low oxygen concentrations, inadequate nutrient supply, increased catabolic waste, and acidity. Depending on the nature, extent, and duration (i.e., chronicity) of their response to injury, cells undergo various dedifferentiated or pseudo-differentiated states distinctive of the transformation process. During these transitions, a new cellular organization emerges, resulting in a distinct adaptive capacity that is largely dependent on the new microenvironmental conditions. One of the key hallmarks of malignancy, acquisition of the invasive phenotype, is an extreme adaptive response to the changed microenvironment, allowing cells to move, (metastasize), in search of a more propitious environment at distant sites. Thus, “cellular reversion” towards ancestral functions similar to those of single-cell organisms and/or embryonic development (e.g., the trophoblast) is the consequence of the progressive uncoupling of the endosymbiotic subsystems. 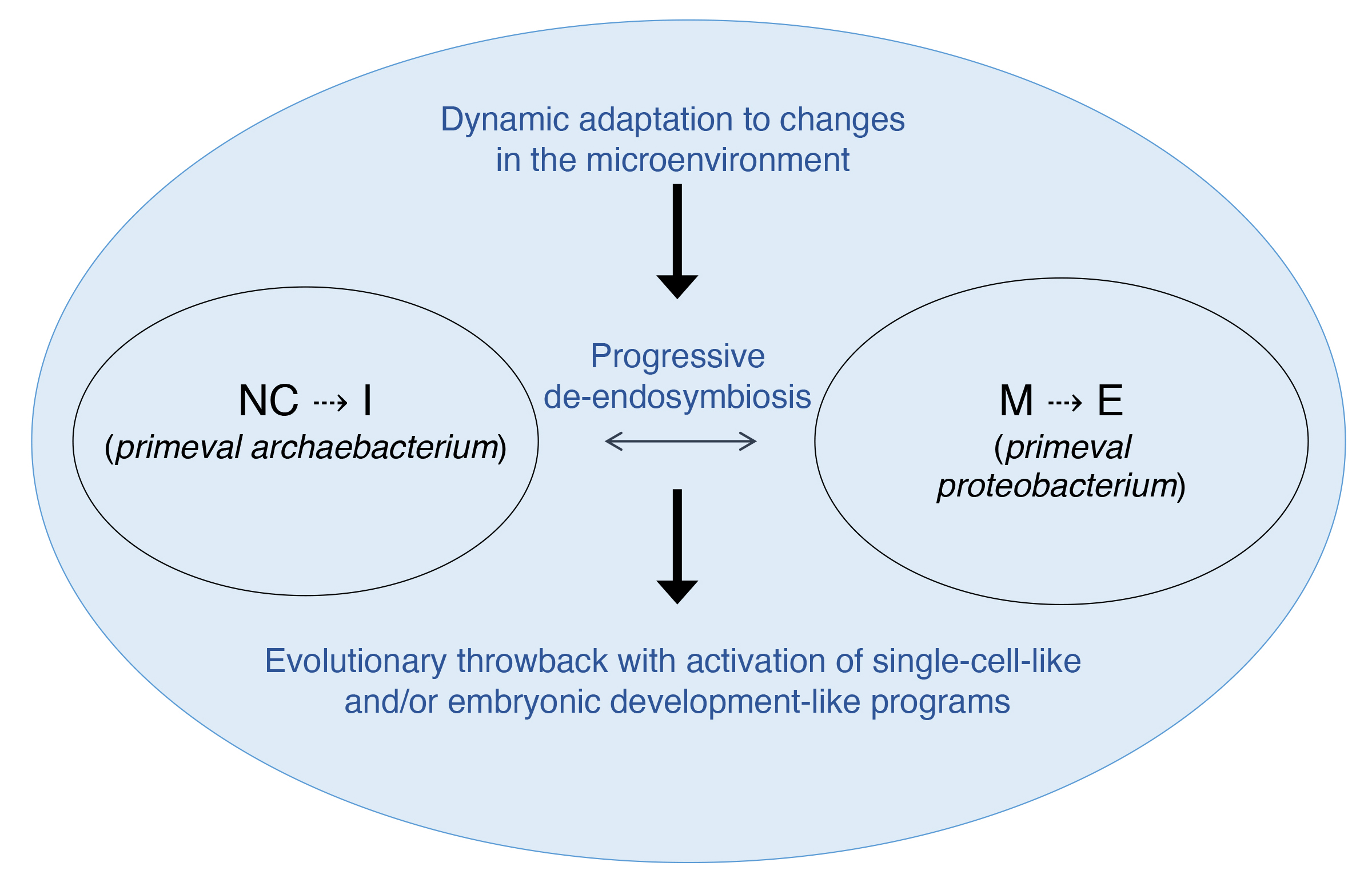 Fig. 2. Over time, the progressive uncoupling of endosymbiosis leads to an evolutionary throwback with the appearance (“de-emergence”) of phenotypic traits resembling those of unicellular organisms (“phylogenetic inversion”) and certain biological features of embryonic development (“ontogenetic inversion”). These adaptive advantages of cancer cells include surviving in a hostile tumor microenvironment, where living conditions become unsuitable for normal cells, so they must undergo dynamic adaptations to survive, leading to their transformation. NC = Nuclear-cytoplasmic system; I = Information; M = Mitochondrial system; E = Energy.

In normal cells, the two cellular endosymbiotic systems are fully integrated to maintain cellular homeostasis and the differentiated state, and this integration is ensured by constant energy intake. In contrast, when chronic organ or tissue injury occurs, energy intake declines, leading to energy shortages failure of endosymbiosis, and the acquisition of the de-differentiated state observed in dysplasia and cancer. Hence, seen through this lens, the process of tumor transformation can be viewed as “cellular de-endosymbiosis” underlying dynamic adaptation of tissues to persistent injuries that change the microenvironment, as well as the cells extreme attempt to adapt to it. From this perspective, cancer can be understood as a last-ditch response by the cell to respond to factors that cause tissue damage and promote regeneration of tissue structures.