The stress of dieting: what a rat model may tell us about weight loss in women

In the United States, obesity and concomitant diseases such as hypertension and diabetes have soared in older adults—and obesity is especially pronounced in women after menopause. Numerous strategies are used to combat excess weight, with the most common being dieting. When eating is reduced, stores of ‘fuels’ are mobilized, allowing the needs of the body to be met and contributing to initial weight loss. However, physiological processes change with time on a diet, reducing the utilization of fuels and mitigating the weight loss benefits of dieting. As a result, the long-term success of dieting remains questionable. Numerous studies of humans and laboratory animals have shown that the ovarian hormone, estrogen, reduces eating and body weight; nevertheless, it is unclear whether the lack of estrogen impacts post-menopausal women’s weight loss success while dieting. Therefore, to determine whether replacing estrogen would facilitate weight loss on a diet, we conducted studies in female rats that had undergone ovariectomy and were restricted to feeding for two hours each day to mimic dieting. 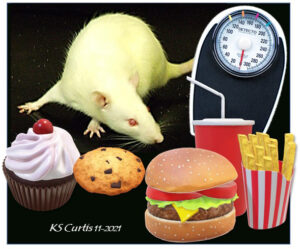 Restricted feeding caused weight loss, but rats that had estrogen replacement lost more weight than rats that did not receive estrogen. Interestingly, the enhanced weight loss in estrogen-treated rats occurred despite consumption of excessively large meals each day, as typically occurs during dieting. Neuronal activity in areas of the brain that receive input about gastric fill and metabolic hormones increased after eating, regardless of whether rats had estrogen replacement. These findings suggest that the greater weight loss in rats with estrogen did not depend on differences in the amount of food consumed, or on how the brain detects signals related to eating, raising the question of whether estrogen enhances weight loss during dieting by differentially influencing metabolism of carbohydrates or fats.