T lymphocytes are key cellular components of the immune system that are essential for the elimination of viral, bacterial and parasitic infections as well as of malignant cells. T cell activation is initiated following recognition of pathogen- or malignant cell-derived peptides (antigen) bound to peptide–major histocompatibility-complex (pMHC) on an antigen presenting cell (APC) by the T cell antigen receptor (TCR). Upon antigen recognition, a specialized membrane domain, known as the immune synapse (IS), forms at the interface with the APC. The IS coordinates the signals transmitted by the APC to promote T cell activation and its subsequent proliferation and differentiation to an “armed” effector cell (Fooksman et al., 2010). 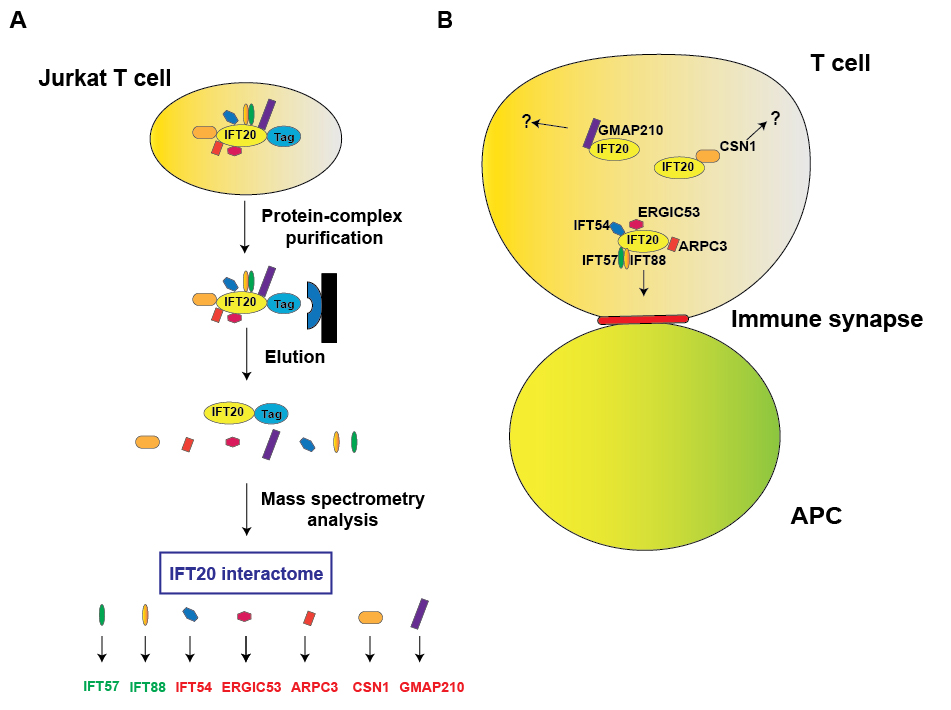 Fig. 1. A. Schematic representation of the experimental approach used to identify the IFT20 interactors by Mass-spectrometry (MS) analysis in T cells. Protein complexes were isolated from a Jurkat cell line, a model of study for T lymphocytes, engineered to overexpress IFT20 fused with a tag to increase the efficiency of protein purification. Protein complexes were eluted with biotin buffer and processed for MS analysis, which resulted in the identification of 7 IFT20 interaction partners. These included to IFT57 and IFT88, which are known to interact with IFT20 (in red) and new binding partners, (in green) namely IFT54, Arp2/3 complex subunit-3 (ARPC3), ERGIC53, GMAP-210 and COP9 signalosome subunit-1. B. The IFT20 interaction partner, IFT54, ARPC3 and ERGIC-53, are new players in IS assembly. The five new IFT20 interactors were tested for their participation in IS assembly, a polarized region of T cell membrane at the interface with an APC presenting specific antigen which is crucial to regulate T cell activation. Of the five, only IFT54, ARPC3 and ERGIC-53 were found to participate in the regulation of the intracellular trafficking pathway regulated by IFT20 that controls TCR accumulation to the IS. Conversely, GMAP210 or CSN1 are not involved in the IS assembly, suggesting that IFT20 interacts with these proteins to play other functions in T cells.

We have previously reported that IFT20, a component of the intraflagellar transport (IFT) machinery responsible for the assembly of a specialized sensory and signaling organelle known as the primary cilium, controls IS assembly in the non-ciliated T cell (Finetti et al., 2009). This function relies on its ability to regulate the transport of the TCRs associated with an intracellular pool stored in recycling endosomes through its cooperation with members of the Rab GTPase family that coordinates vesicular trafficking (Finetti et al., 2014; Finetti et al., 2015). By regulating the endosomal traffic of the TCR and other key molecules that participate in signaling at the IS, IFT20 orchestrates an efficient T cell-mediated immune response, as validated in vivo in a mouse model genetically deficient for IFT20 (Vivar et al., 2016).

To gain insight into the mechanisms by which the IFT system coordinates IS assembly, we undertook a quantitative mass spectrometry analysis of the T cell proteins that interact with IFT20 (interactome) using an unbiased, high-throughput approach. This analysis resulted in the identification of seven binding partners of IFT20. These include three other IFT components, IFT54, IFT57 and IFT88, two of which (IFT57 and IFT88) we had previously shown to interact with IFT20 to control polarized TCR recycling to the IS (Finetti et al., 2009). The other interactors are i) the Golgi-associated protein GMAP210, which is known to interact with IFT20 in ciliated cells (Follit et al., 2008); ii) the adaptor Arp 2/3 complex subunit 3 (ARPC3), which is required for actin polymerization and which had been previously implicated IS assembly (Gomez et al 2007); iii)  subunit 1 of the COP9 signalosome (CSN1), an evolutionarily conserved multimeric complex which controls ubiquitin-proteasome-mediated protein degradation in a number of cellular and developmental processes  (Wei et al., 2008); iv) the vesicular traffic-related protein ERGIC-53 that controls transport from the endoplasmic reticulum to the Golgi apparatus (Zhang et al., 2009). We tested the five new IFT20 interactors for their participation in IS assembly and T cell activation using RNA interference, confocal imaging, flow cytometry and biochemical assays. Of these, we demonstrated that IFT54, ARPC3 and ERGIC-53 are required for TCR accumulation and signaling at the IS. At variance, GMAP210 or CSN1 are dispensable, suggesting that they may link IFT20 to other cellular processes in which they have been implicated, such as autophagy or protein degradation.

These results pave the way to new studies to individually characterize these interactors for the mechanisms that mediate their participation in the process of IS assembly as well in other pathways that regulate T cell function. The functional dissection of the proteins which are involved in the regulation of T cell activation could provide new insights into T cell-related immune dysfunctions and help in identifying new candidate disease targets in primary immunodeficiencies of unknown aetiology, which are characterized by T cell defects for which the gene lesion has as yet not been identified.