The thinner, the glassier

Polymers are a key component of our technologies. The diversity of uses and forms of these inexpensive materials is impressive: polymers are present in almost all the aspect of everyday life. Polymers are also intensively studied at the fundamental level, because they are model systems to investigate viscoelasticity, the property of materials exhibiting both a viscous (liquid) and an elastic (solid) mechanical response, and because they easily form glasses, solids lacking of the long-range order typical of crystals. 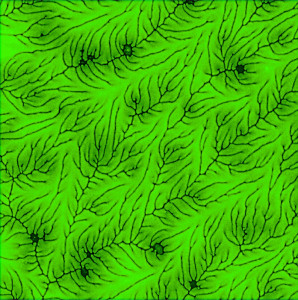 The performance of glasses can be evaluated via parameters like glass stability (GS), that is, the stability against crystallization and glass forming ability (GFA), the easiness with which a liquid can be transformed into a solid lacking of long-range (a glass). These parameters can be assessed by analyzing the temperature of thermal transitions of the glass upon heating. In our work we were able to determine, for the first time, the impact of nanoscopic confinement on GS and GFA, providing guidelines for the development of nanodevices based on polymeric materials.

We considered thin films (thickness < 200 nm), a benchmark system to study polymers in confinement. Measurements were performed on a well-known biodegradable polymer, poly(L-lactide acid) (PLLA), prepared in films as thin as 6 nm. Our PLLA films are glassy at room temperature and around 50 °C they lose the solid like behavior and behave as liquids (glass transition). Further increase in temperature allows organization (cold crystallization) of the molecules into ordered structures, which are stable up to the melting transition. We monitored those properties as we reduced the film thickness, which allowed us to determine stability of and ability to form glasses in confinement.

This study required to combination of two sets of probing techniques. Thermal transitions were measured by spectroscopy ellipsometry and crystalline phases were characterized by atomic force microscopy and X-ray scattering.

Our experiments revealed that both glass transition and cold crystallization temperatures increase with reducing film thickness, whereas the melting temperature decreases. In order to explain these trends, we based our discussion on the amount of molecules immobilized onto the substrate. We considered that immobilized molecules pack better and so they have less free volume. Thus, these molecules move slower – just think of how late you arrive to an appointment when you’re jammed in the traffic – justifying the trends we observed. The reduction in melting temperature was, instead, rationalized considering that upon confinement we have an increase in the volume fraction of immobilized molecules, which cannot crystallize. Because the melting temperature is inversely proportional to the size of the crystals, the presence of an adsorbed layer induces a reduction in melting point.

With these explanations in mind, we drew a comprehensive picture of how polymers form glasses in confinement based on the presence of a layer of adsorbed molecules at the interface. GS is not affected by the thickness: the windows of glass stability just shift but does not expand nor reduce as the glass transition and cold crystallization are similarly affected by the adsorbed layer. On the contrary, the glass forming ability tremendously increases below 30 nm. High values of GFA means that the system vitrifies more easily. The presence of adsorbed layers, in fact, increases the viscosity of the interfacial layer and thus hinders the formation of crystals.

Our work demonstrates that controlling the amount of adsorbed molecules will permit to finely tune materials properties of polymers confined at the nanoscale level.