Present in the majority of cells, mitochondria play a major role in the production of cellular and organismal energy, and contribute to cellular/ion homeostasis. Mitochondria possess multiple copies of their own genome (mtDNA), that encodes 13 essential subunits of the respiratory chain and ATP synthase, along with the tRNAs and rRNAs necessary for their production. mtDNA is highly susceptible to mutations, which can then co-exist with wild-type molecules in a state known as heteroplasmy. mtDNA mutations are responsible to a number of devastating mitochondrial diseases, and their accumulation over time has been implicated as a driving force in the ageing process itself, with high levels of mtDNA mutations being found in various neurodegenerative disorders such as Parkinson’s and Alzheimer’s diseases. The consequences of heteroplasmic mtDNA mutations have been studied in vivo using the proofreading (exonuclease) deficient variant of the mtDNA polymerase, POLG. The mtDNA ‘mutator’ mouse exhibits many characteristics of a premature ageing syndrome and shortened lifespan. However, the mutational heterogeneity that arises in this model (mtDNA point mutations, but also insertions/deletions and mtDNA depletion) has led to considerable debate about the pathogenic entity and whether point mutations are actually driving ageing. Moreover, a defective POLG in flies and worms only produce minor organelle and organismal defects, questioning if unhealthy mitochondria contribution to aging is a conserved feature. 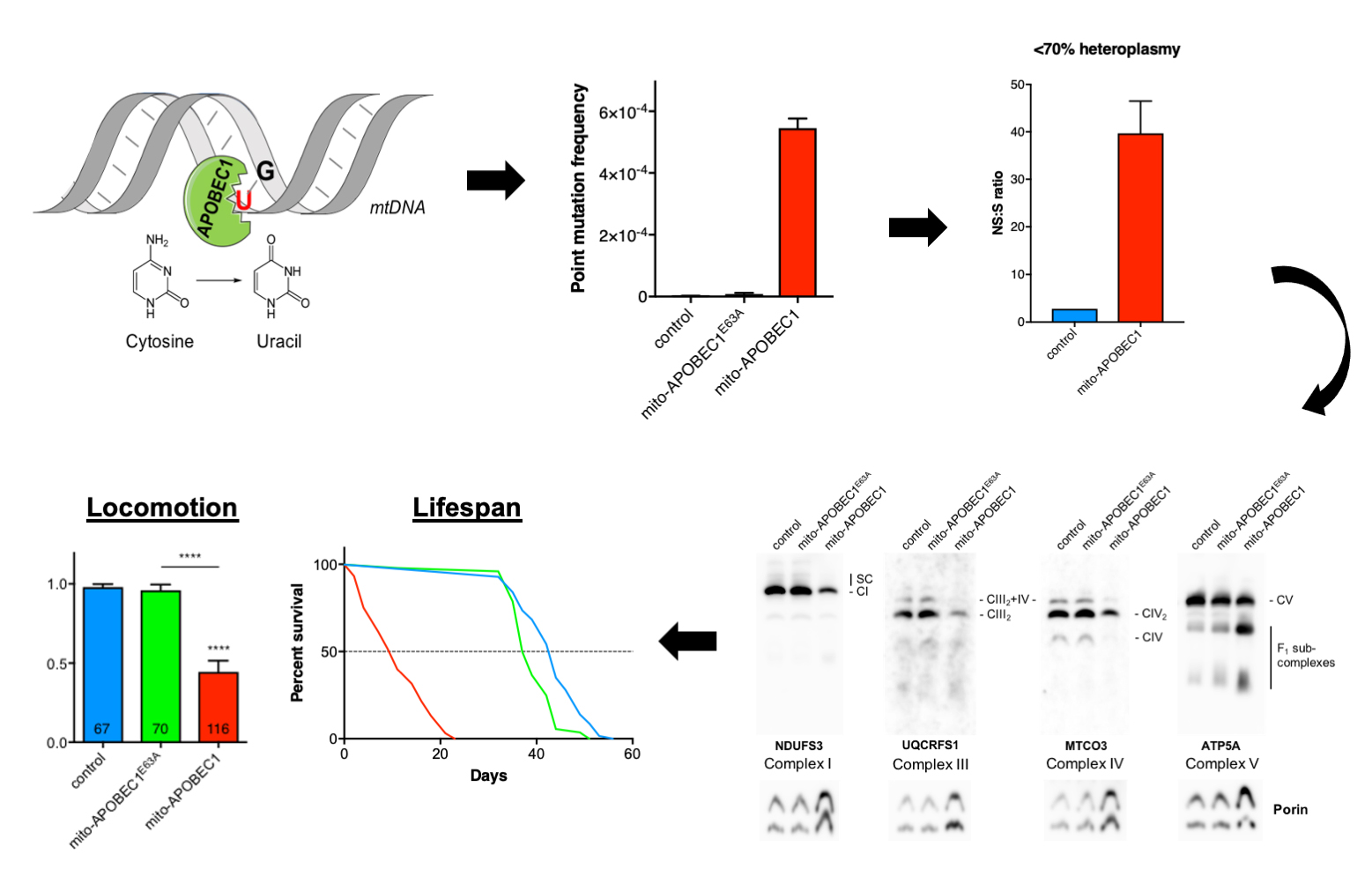 We have recently developed an alternative mtDNA mutator model system by targeting the rat cytidine deaminase APOBEC1 to mitochondria in Drosophila. APOBEC1 catalyses the deamination of cytosine to uracil (C>U) in polynucleotides, which can cause a mutagenic C:G to T:A transition, mirroring the predominant mutation profile seen in human ageing. Deep (Duplex) sequencing analysis of brain-derived mitochondrial genomes show that the “mito-APOBEC1” flies generate high levels of somatic mtDNA point mutations, while keeping baseline levels of insertions/deletions and unaltered mtDNA total copies. As a control, expression of a catalytically dead version of the enzyme, mito-APOBEC1E63A, shows no increased mutations rates. As the mitochondrial genome is extremely AT-rich, the high specificity of APOBEC1 for C:G>T:A transitions exert a particularly detrimental effect on mitochondrial protein-coding genes, dramatically increasing the occurrence of non-synonymous (NS) substitutions and the NS:S ratio. As a result of potentially un/mis-folded protein subunits, we show reduced amounts of respiratory complexes’ formation, and accumulation of assembly intermediates. Differently to defective POLG flies, targeted expression of APOBEC1 into mitochondria leads to a decline in organismal fitness (fly locomotor abilities) and reduced lifespan, thus recapitulating signs of premature aging. Since early in development, mito-APOBEC1 rapidly and possibly iteratively targets selected positions on the mitochondrial genome, producing moderate levels of heteroplasmy, as opposed to the stochastic profile of highly mutated sites when germline-transmitted defective POLG is used. Therefore, the mutation type (quality) rather than quantity is a critical factor in impacting organismal fitness in flies.

This study establishes mito-APOBEC1 as a potent mtDNA mutator model which exclusively induces C:G>T:A transition point mutations and causes premature aging phenotypes in flies. The use of mito-APOBEC1 in flies and other model organisms can be an excellent system for research studies in the aging and mitochondrial field. We are currently using mito-APOBEC1 flies to investigate the impact of mtDNA mutations on cellular homeostatic processes and decipher the mechanisms that can mitigate the accumulation of mtDNA mutations, such as mitochondrial autophagy (mitophagy) and other quality control measures. Importantly, being an inducible system, mito-APOBEC1 also opens up the possibility to assess the effects of spatial and temporal targeted mtDNA mutations accumulation.