The use of dry powder mannitol in respiratory disease

Asthma is an inflammatory disease of the airways causing them to be hyperresponsive to a wide range of stimuli. It is a common disease both in children and adults and most asthmatics suffer from allergies and from exercise-induced asthma (EIA). The stimulus for EIA is the loss of water by evaporation from the airway surface liquid (ASL) in the process of humidifying large volumes of air in a short time. Since the volume of the ASL is very small in the first 10 generations of airways, and the water is evaporated faster than it is replaced, a transient increase in osmolarity i.e. hyperosmolarity of the ASL is predicted to occur. This hyperosmolarity causes release of histamine, prostaglandins and leukotrienes from inflammatory cells situated on or near the airway surface. These bronchoconstricting substances cause hyperresponsive airway smooth muscle to contract and the airways to narrow i.e. an ‘attack’ of asthma. Identifying EIA is important as it can be prevented. 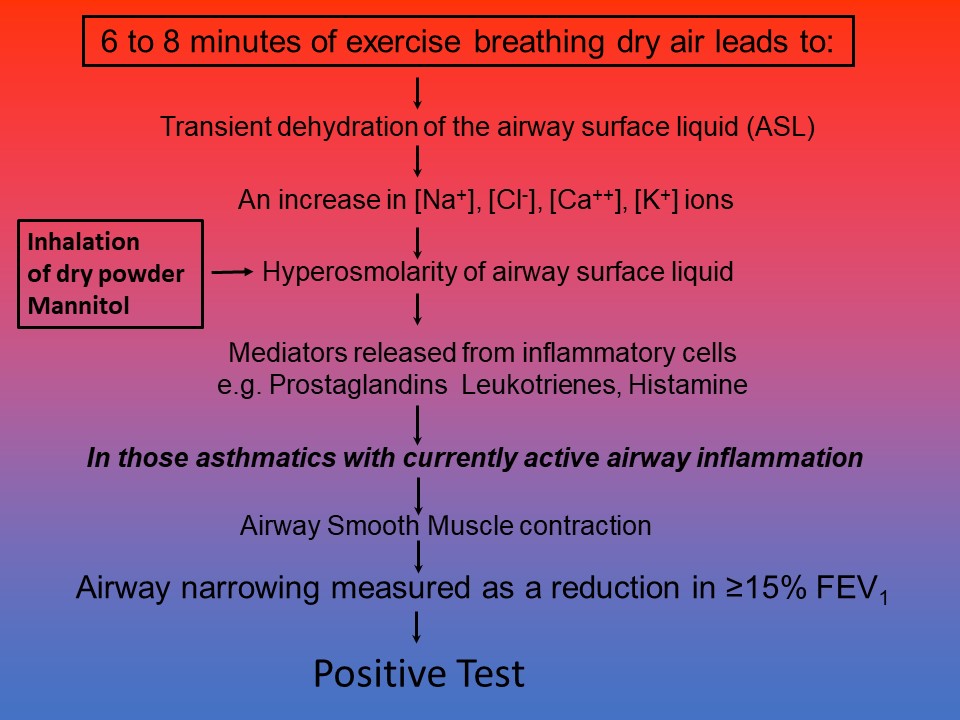 Testing for EIA however can be difficult requiring the subject to perform 6 to 8 minutes of vigorous exercise by running or cycling in a temperate environment. To overcome the requirement for exercise equipment we proposed that the cellular events associated with EIA could be reproduced in an asthmatic simply by inhaling a hyperosmolar aerosol. Mannitol (C6 H14 O6 mol weight 182) is a naturally occurring sugar alcohol found in the sap of the manna tree and in many vegetables. It was decided that mannitol, a molecule generally regarded as safe and well known as an osmotic diuretic could be used to increase the osmolarity of the ASL. We developed a dry powder preparation of mannitol, suitable for inhalation and deposition in the lower airways in humans. The mannitol is delivered in increasing doses, by inhaling the powder from a capsule using an inhaler device. One minute after each dose of the mannitol the forced expiratory volume in one second (FEV1) is measured following a maximum inspiration. The dose of mannitol is increased until a 15% reduction in FEV1, a positive test result, occurs, or a cumulative dose of 635 mg has been inhaled. Those subjects with a positive mannitol test are also highly likely to have their asthma provoked by exercise. For these reasons the mannitol test is used for assessing those who wish to enter an occupation where a history of asthma may be contra indicated e.g. defence forces and underwater diving. The mannitol test, is a point of need and standardised test to identify ‘bronchial hyperresponsiveness’ A mannitol test kit was developed and is known as Aridol® or Osmohale®. A positive test result is indicative of active inflammation of the airways that resolves over time in response to treatment with inhaled corticosteroids. Mannitol dry powder has also been used in clinical trials to enhance clearance of secretions in patients with muco-ciliary dysfunction e.g. cystic fibrosis or bronchiectasis (Bronchitol®). The airways of these patients are dehydrated due to an imbalance between the load of mucus produced and the water available at the airway surface. Dehydrated mucus has abnormal physical properties that impair its clearance i.e. mucus is sticky and viscous. Mannitol, as an osmotic substance, given by inhalation, has the potential to bring water to the airway surface to rehydrate the mucus. The result is that the viscosity of the mucus is reduced leading to enhanced clearance of secretions both by ciliary action and by cough. In patients with cystic fibrosis, there is an increase in the FEV1 following treatment with mannitol and for some patients a reduction in exacerbations. These patients are treated with beta agonists before taking the mannitol in order to prevent airway narrowing.