Alzheimer’s disease (AD) is a disabling and progressive illness that causes a high social cost and economic burden. Current diagnosis has been done by clinical appreciation based on the Diagnostic and Statistical Manual of Mental Disorders (DSM–5) and by neuropsychological assessments.

1) The extracellular deposition of neuritic plaques formed by amyloid-β (Aβ) peptides and 2) Intraneuronal neurofibrillary tangles (NFTs) formed by the abnormally phosphorylated microtubule associated protein tau. In addition, NFTs were also described in postmortem olfactory epithelium biopsies and the abnormal aggregates of hyperphosphorylated tau were observed inside the neurites and in the neuronal soma, resembling those NFTs found in brain tissue. 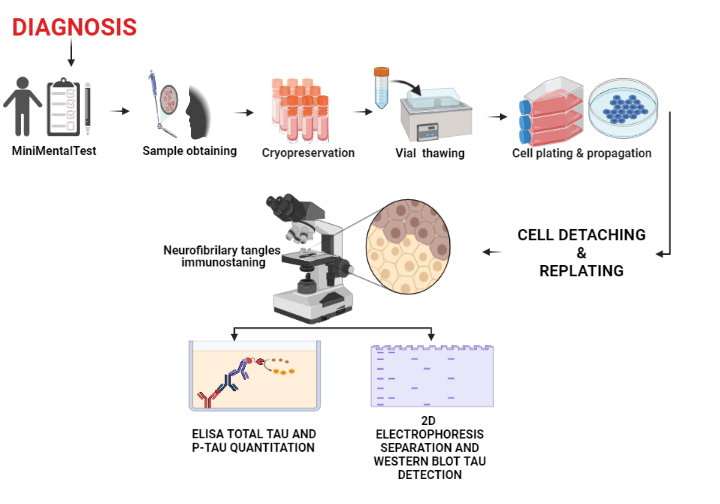 Fig. 1. Representative scheme of the procedure to obtain olfactory neuronal precursors by exfoliation and the method for detection of neurofibrillary tangles and quantitation of phosphorylated and total tau levels.

In the last years the scientific community made efforts to find biological markers to detect Alzheimer’s disease before the appearance of the first clinical manifestations and to monitor the disease progression. Thus, biomarkers were searched in biological fluids, in brain images and in peripheral tissues. However, the study of these markers in alive neuronal cells of patients were hampered by the inaccessibility of the brain tissue to obtain a biopsy and for ethical reasons for the potential damage that can be caused to the patient.

In recent years the olfactory neuroepithelium has been considered as a subrogate model of the Central Nervous System (CNS) because they have metabolic, biochemical, and physiological characteristics like the CNS. Therefore, the obtaining of neuronal olfactory precursors from the nasal cavity by a non-invasive and low painful method have rendered a suitable alternative for identification and characterization of antemortem biomarkers in AD patients.

In this paper we describe a highly sensitive method for the detection of NFTs by immunofluorescence labeling and the quantitation of  the proteins that constitute them (total tau  and phosphorylated tau) levels in extracts of olfactory neuronal precursors obtained by exfoliation of the nasal cavity of AD patients and control participants.

In the article we describe the protocol for stain the NFTs in cultured olfactory neuronal precursors.  Also, the preparation of total cellular extracts to simultaneously detect phosphorylated tau isoforms and total tau by ELISA.

Neurofibrillary tangles formation was estimated by the frequency of their appearance in cultured neuronal precursors and we reported absolute values of tau isoforms in AD patients calculated from standard curves.

The procedure to separate tau by two-dimensional gel electrophoresis to distinguish phosphorylated tau variants are also described. We used a specific anti-tau antibody that recognizes the carboxy-terminal region of 17 amino acids conserved in all isoforms of tau. We found 5 isoelectric tau variants in the AD patient that showed heavier molecular weights and more acidic isoelectric points than those of the control subject indicating that tau in the AD patient were more phosphorylated and that incorporated a higher number of phosphate groups.

The amounts of total tau and phosphorylated tau in a specific site (199 and 202 serine amino acids) were determined by subtracting the amount of dephosphorylated tau from the total amount of tau. The results shown here demonstrate that and tau alterations and NFTs are present in cultured neuronal precursors derived from AD patients. Thus, both alterations can be used as biomarkers for antemortem diagnosis.