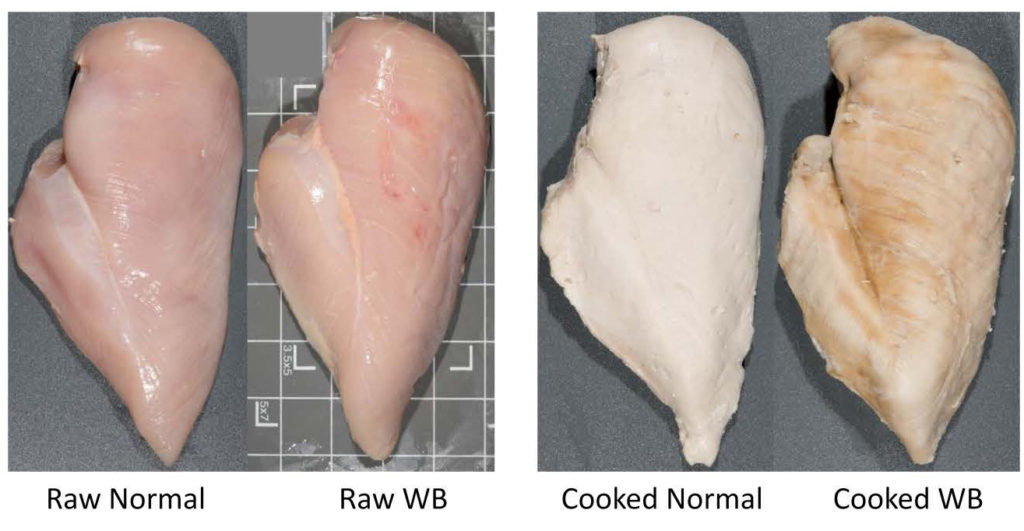 The WBC disorder is emerging on a global scale and the incidence rate could be up to 50% of a flock. Published data show that WBC negatively affects meat quality and functionality. Breast meat with WBC has significantly higher pH and appears yellower, likely due to reduced carbohydrate metabolism and increased fat content in muscle. WBC meat losses more water during storage and cooking, which is thought to be related to the reduced muscle protein content and an increased proportion of extra-myofibrillar water within the muscle. Meat with the WBC does not perform as well as normal meat during marination and further-processing. Breast fillets with the WBC are often downgraded and sold at a discount, used for further processing, or in extreme cases discarded.  It has been estimated that the WBC and white striping (another abnormality associated with chicken meat) could result in an excess of $200 million per year lost.

Both raw and cooked WBC meat appears differently from normal breast meat (Fig. 1). Palpable hardness and rigidity are typical properties of raw WBC meat. However, palpation is subjective and is not able to provide specific texture descriptions of breast meat. It is also unknown if the WBC, which is subjectively determined in raw fillets, results in altered texture attributes in cooked breast meat. Several instrumental methods are being evaluated as tools to fully characterize the texture properties of meat. In this study we selected broiler breast meat based on severity of the WBC and measured shear resistance (Meullenet-Owens Razor Shear method) and hardness (compression method) in both raw and cooked meat. 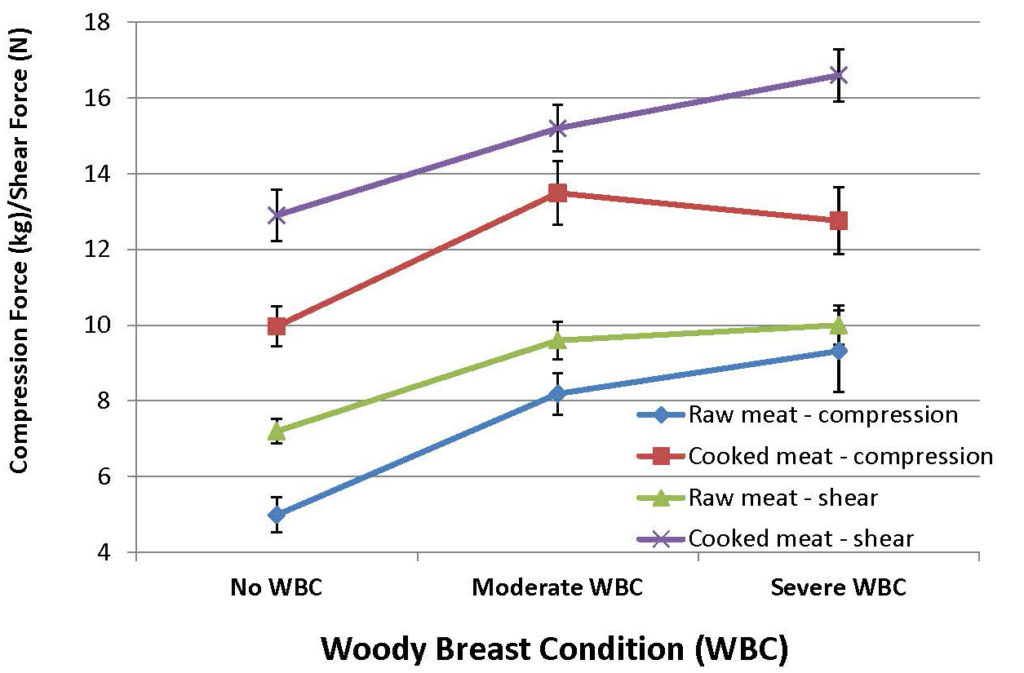 Our results (Fig. 2) showed that for both raw and cooked breast meat, shear and compression force of WBC meat, regardless of WBC severity, were significantly higher than that of the normal meat. There were similar relationships between the severity of the WBC and the texture measurements for both instrumental methods. In addition we also found that these relationships were not affected by freezing storage. These results demonstrate that WBC significantly affects hardness and shear force in both raw and cooked breast meat. Since there is close positive relationship between meat shear force and a consumer’s perception of meat tenderness and compression force mimics the conditions to which the material is subjected throughout the mastication process, our results indicate that texture of cooked WBC meat would be perceived differently from that of cooked normal meat.  Cooked WBC meat is less tender and requires more force to chew through its muscle fibers than cooked meat without the WBC.