It has been known for many years that in temperate climates, the European honey bee, Apis mellifera, exists in the form of two distinct populations within the year, short-living summer bees and long-living winter bees. Summer populations’ lifespan is between 15 and 48 days; whereas, the winter generation can survive up to 8 months (Fig. 1).  Short-living honey bees collect nectar, honeydew, and pollen during the summer to stock up enough to survive unfavourable times during winter when a crop is not available. Long-living honey bees regulate colony temperature during winter and are predestined to initiate brood rearing, when a new summer population replaces this generation. Moreover, the winter population is exposed to higher ecological pressure of pests, diseases, and a high risk of colony collapse disorder (CCD). The losses of honey bee colonies during the winter period are the main problem for beekeepers worldwide. In our research, we wanted to establish easily measurable markers that would help identify long-living honey bees in the hive for beekeepers. 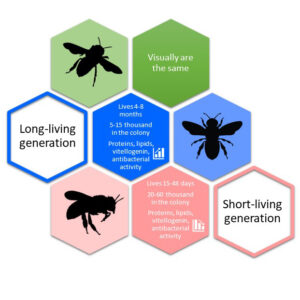 Because most of the problems occur during the winter period, we focused on identifying differences in physiological and immune parameters between short-living and long-living honey bee populations. We measured a broad spectrum of physiological (concentration of proteins, lipids, carbohydrates and vitellogenin) and immune (antibacterial activity, activity of phenoloxidase and total haemocytes count) parameters for an almost two-year period in order to establish the differences between the populations. The bees were sampled at the beginning of each month to establish baselines for short-living and long-living populations. From May to August and from October to March, the honey bees present in hive were considered short-living and long-living, respectively. In the winter season, we observed a significant increase in the concentration of protein, lipids, vitellogenin and antibacterial activity; whereas, the rest of the measured parameters stayed stable during the whole following period. Based on the statistical method called Principal Component Analysis and simplicity of measurement, we selected the total protein concentration, vitellogenin level and antibacterial activity as markers of honey bee longevity (Fig. 2). 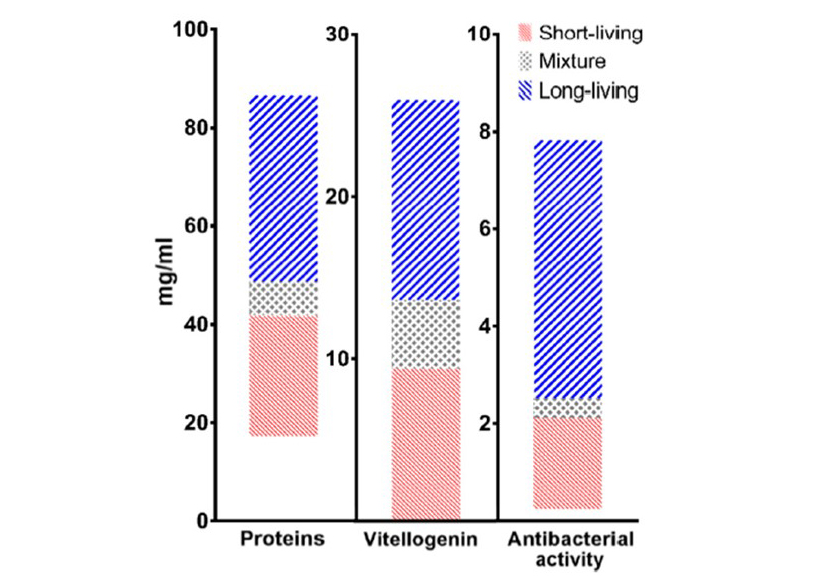 The distinction between winter and summer bees is becoming increasingly important. It is an important tool that can be used in sustainable and more ecological beekeeping practice. Heretofore, there was no convenient methodology useable by beekeepers to determine the presence of long-living honey bees in the hive. Therefore, we proposed markers that beekeepers can use in a temperate climate to confirm the presence of winter generation. Based on the results of the analyses, beekeepers could adjust the care of their colonies and take practical precautions to protect beehives and reduce winter losses.