Threats from antifouling priority pollutants in the Adriatic sea

To ensure the preservation of public health and ecosystems it is essential to reach a good chemical status of surface water bodies and groundwater. To this end, such waters should comply with the Environmental Quality Standards (EQS) for the priority pollutants. These are contaminants that should be monitored as a priority since they pose a significant risk to/via the aquatic environment, due to their persistence, bioaccumulative features and/or toxicity. Two types of EQS are provided for water: 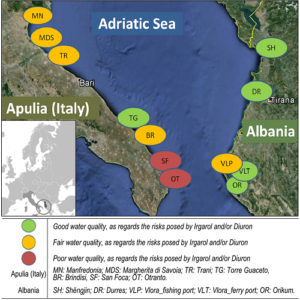 Fig. 1. Map of the risks posed by Irgarol and Diuron in the coastal waters of Apulia (Itay) and Albania.

Among the priority pollutants are the herbicides Irgarol 1051 (hereinafter Irgarol) and Diuron which have been used for years in antifouling paints applied on boat hulls in order to inhibit the fouling growth, causing problems as the transfer of invasive species and a higher fuel consumption. On the other hand, antifouling biocides are potentially harmful to non target marine organisms. Therefore, to avoid that the solution of a problem leads to the onset of another, it is necessary to know the extent of contamination and of the risks from these biocides in order to mitigate/fix the highlighted critical situations by targeted actions.

With this aim, in the 2012-2014 period, a monitoring survey was carried out in the waters of the main ports along the coasts of Albanian and Apulia (Italy), and the Irgarol and Diuron measured concentrations were compared with the EQSs set by Directives 2008/105/EC and 2013/39/EC.

Moreover, in order to estimate the probability of adverse effects on non targets organisms, an Ecological Risk Assessment (ERA), according to a probabilistic approach, was carried out.

The research showed that Apulia was more contaminated by Irgarol and Diuron than Albania, probably due to the higher boating traffic.

However, ERA results suggest that the MAC-EQS and AA-EQS values for Irgarol are very conservative. Indeed, there was virtually no probability of adverse effects not only at levels above the AA-EQS but also when the concentrations were as high as twice the MAC-EQS. A not negligible risk for marine organisms exposed to Irgarol was found only in those ports where the biocide concentrations exceeded by far the MAC-EQS (i.e. about 6 times the MAC-EQS).

As regards Diuron, the measured amounts were always lower than the MAC-EQS (1800 ng/L), in both countries, and only occasionally they exceeded the AA-EQS (200 ng/L), in Apulia. However, contrary to what observed for Irgarol, Diuron concentrations below the MAC-EQS, but higher than AA-EQS, resulted to be harmful to the sea environment. Indeed, ERA obtained a not negligible risk for marine organisms exposed to Diuron in those ports where the biocide exceedance of AA-EQS occasionally occurred.

Therefore, ERA indicates that AA-EQS for Diuron is not very much conservative since a not negligible risk was found as a result of occasional exceedances of the AA-EQS.

This study evidences that the risks from selected priority pollutants used in AF formulation are not negligible in the Adriatic Sea and highlights the suitability/role of the actual EQSs in risk assessment.