Thymus and surgeon: an attractive and challenging gland

The thymus is a small gland sited in the anterior-superior  mediastinum, approximately in the midline. It has  an h-shape  presenting two upper and two lower horns. It lies on the anterior surface of the pericardium starting from the lower extremities of the thyroid and touching bilaterally both mediastinal pleura.

Although small and mysterious it attracted the attention of the surgeons  much more than any other organs within the chest. The evidence of this is represented by the so many surgical routes adopted for the execution of thymectomy either in the case of non-thymomatous myasthenic patients, or for thymomas. 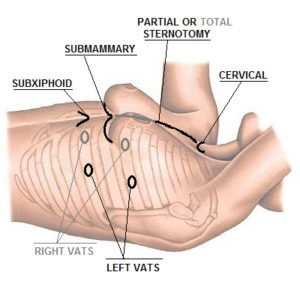 The serious complications, the non-cosmetics sequelae, the acute and often long-lasting postoperative pain, represent the main reasons that make partial or total sternotomy  badly accepted to both patients and physicians. However, sternotomy remains the approach which provides a real extended or maximal thymectomy in all thymic disease. Furthermore, this procedure should be necessarily comprised into the armamentarium of any surgeon which faces the surgery of the thymus, also including the all new minimally invasive approaches. The possible vascular complications during video-assisted operations can be controlled through the fast-track accomplishment of the sternotomy.

Over the years less invasive approaches have progressively gained an important role in the treatment of the non-thymomatous myasthenia gravis (MG) and early stage thymomas as well. These include transcervical surgery, video-assisted thoracic surgery (VATS) and robotic VATS (Fig. 1).

Reduced operative trauma, less postoperative pain, short hospital stay, good cosmesis, and  subsequent better postoperative quality of life are the most attractive features of these approaches. They have the prerequisite qualities requested by patients, surgeons and neurologists and by the economic administrators in terms of cost-benefit ratio.

Benefits and drawbacks of all proposed approaches are well-known to the surgeons. However, the best surgical approach is still controversial. The choice of the surgical access mainly depends on the experience and the personal preference. A decisive criteria may originate by an attentive evaluation of appropriate imaging. Those are particularly able to outline the extension of the thymic neoplasms and particularly of the involvement of vascular and mediastinal structures.

Nowadays data arising from the numerous surgical experiences allow us to affirm that conventional VATS is presently a safe procedure with a relevant role in integrated treatment of non-thymomatous MG.

More recently, novel technological advances as well as improved maneuvers provided by new dedicated instruments have made possible a uniportal approach, which represents the latest challenge performed by the most experienced surgeons in VATS thymectomy.

Among these we emphasize the uniportal subxiphoid route. We found it to be easy and much less painful compared with all others minimally invasive approaches. It is accepted more promptly and without hesitations from patient and referring neurologist. We used it also in early stage thymomas after a detailed evaluation of the mediastinum. However, if the thymoma is greater than 5cm in diameter or locally advanced, we found the subxiphoid route  inadequate because of the reduced working mediastinal space.

Given its challenging aspect minimally invasive thymectomy is mostly attractive for surgeon under training. Nevertheless, the young surgeon should be firstly addressed to a program of open thymectomy. Thus, we suggest that several simulations as well as ten median sternotomies are the minimum number before starting VATS extended thymectomy. Recently, we have adopted a “patient-tailored minimally invasive thymectomy” strategy, based on both patient body habit and imaging findings. Finally, we also noted VATS useful in the patient with refractory MG  where still active thymic residual could successfully removed by completion thymectomy.

Despite the thymus has been assaulted by the surgeons from any side, the perfect access able to allow the most extended thymectomy with the minimal postoperative impact and the best cosmesis does not yet exist. All in all one thing is certain: the small gland remains an open challenge.