TMEM165; The Bermuda triangle of glycosylation and Golgi Mn homeostasis

During evolution, eukaryotic cells have acquired a complex network of endomembranes delimiting distinct organelles with specific cellular functions. In mammals, the rough endoplasmic reticulum (ER) and the Golgi apparatus are two key organelles of the secretory pathway housing one of the main post-translational modifications (PTMs) of proteins and lipids: glycosylation. Glycosylation is extremely conserved and leads to the synthesis of specific glycan structures onto proteins. This is an enzymatic process requiring a well-defined sub cellular localization as well as an adequate environment in terms of pH and ions. Initially thought as decorative elements of the proteins, the fundamental roles of these structures have dramatically been illustrated by a family of rare genetic diseases known as Congenital Disorders of Glycosylation (CDGs). This growing family of glyco-diseases highlights the essential genes in the regulation of the glycosylation process. 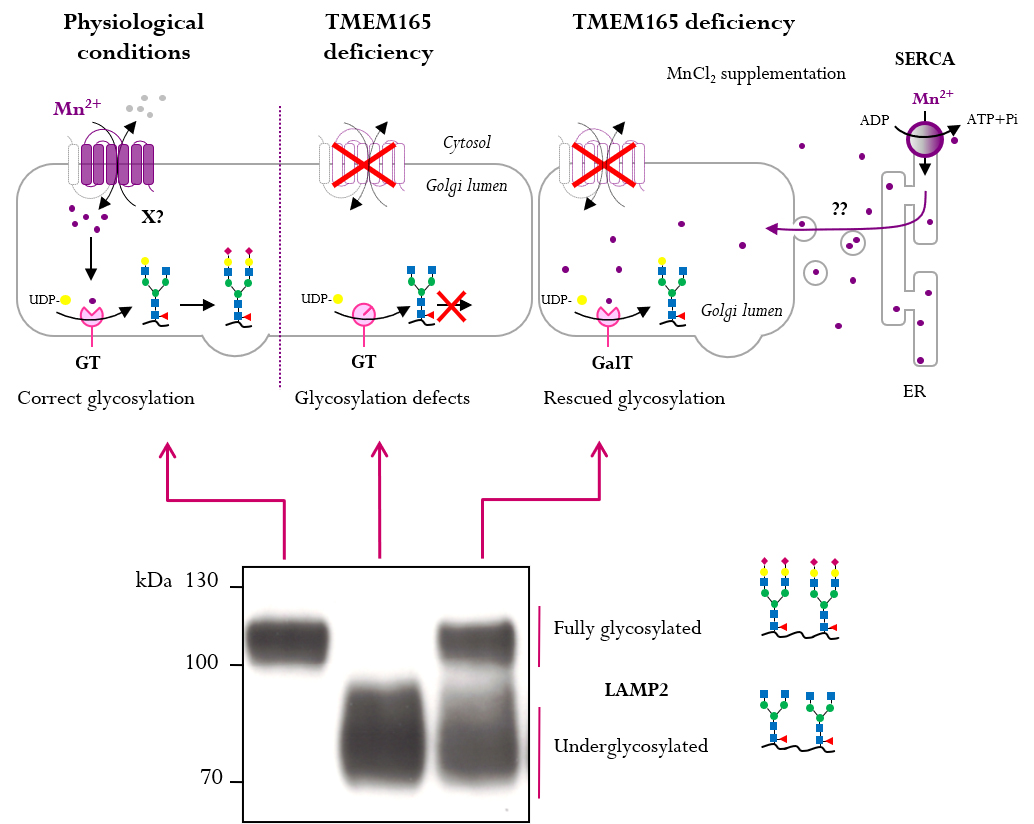 Fig. 1. Role of TMEM165 in Golgi glycosylation and Golgi Mn2+ homeostasis. TMEM165 is considered as the major Golgi localized Mn2+ transporter supposed to exchange cytosolic Mn2+ for an unknown luminal ion. In human cells, TMEM165 involvment in Golgi Mn2+ homeostasis drives the Golgi glycosylation by feeding the Golgi apparatus with Mn2+, crucial cofactor of many galactosyltransferases (GalT). Therefore, strong glycosylation defects are observed in case of TMEM165 deficiency due to a disrupted Golgi Mn2+ homeostasis. In case of exogenous addition of MnCl2, we provided evidences for Mn2+ entry into the Golgi lumen thanks to the Mn2+ transport activity of likely SERCA pumps and vesicular trafficking between the endoplasmic reticulum (ER) and the Golgi apparatus. The western blot presented shows the altered electrophoretic migration of LAMP2 in TMEM165 deficient HEK cells. On the right, a simplfied representation of the N-glycosylation defect is provided

We identified in 2012 a new gene called TMEM165 in CDG patients presenting a unique clinical phenotype including dwarfism, osteoporosis, and major skeletal dysplasia. Defects in TMEM165 lead to extremely severe glycosylation abnormalities. Our analysis show a strong lack of galactose residues on N-glycans (Fig. 1). The cellular functions of TMEM165 were unknown. However the observation that very tiny concentration of Mn supplementation in the culture medium of TMEM165 KO cells was sufficient to completely suppress the observed N-glycosylation defects, led us to uncover the involvement of TMEM165 in Golgi Mn homeostasis. It is so powerful that such treatment can directly be translated to the clinic for the TMEM165-CDG patients. The molecular mechanisms by which Mn rescues the glycosylation process is not completely deciphered yet. Our work shows the involvement of the ER compartment in this pathway likely via the ER SERCA transporter activity. Under Mn supplementation, SERCA would pump Mn2+ to distribute it in the secretory pathway and then to the glycosylation enzymes that miss it. This highlights a new concept in which the ER would feed the Golgi apparatus with Mn2+ ions crucial for glycosylation reactions.

Altogether, our results support the model depicted in Figure 1. TMEM165 would be a Mn transporter at the Golgi level essential in Golgi Mn homeostasis maintenance. As the Golgi enzymes cannot work without Mn2+, the activity of TMEM165 is required.