Towards organs on demand: a new platform for successful kidney organogenesis

The ultimate treatment for end-stage renal disease is orthotopic transplantation. However, the demand for kidney transplantation far exceeds the number of available donor organs. While more than 100,000 Americans need a kidney, only 17,000 people receive a kidney transplant each year (National Kidney Foundation estimate).

In recent years, several regenerative medicine/tissue engineering approaches have been exploited to alleviate the kidney shortage crisis. Although cell-based therapy shows promise in experimental animal models, it cannot be applied when renal structure has been profoundly altered, as in chronically injured kidney. In these cases, kidney regeneration is needed to rebuild a whole functional kidney de novo, eliminating the need for dialysis. 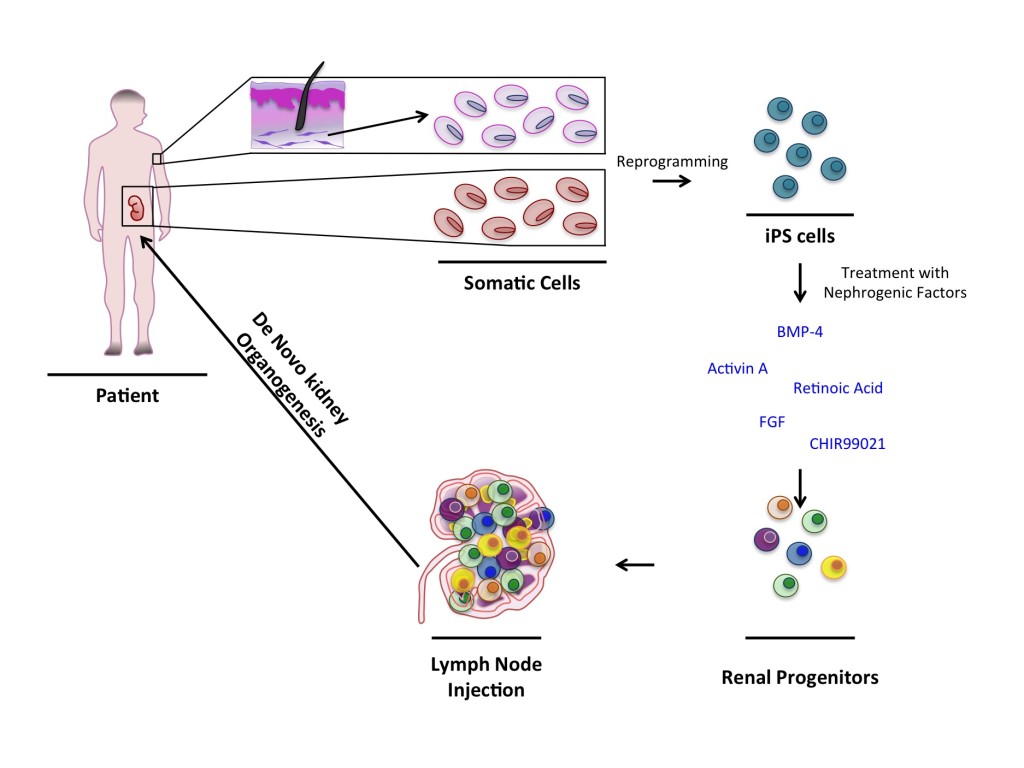 To rebuild a kidney, some investigators have proposed emulating early stages of organogenesis by implanting the primordial kidney, also known as the metanephros.

For tissue transplantation to be effective, a hospitable site must be relatively accessible, provide sufficient space for cell expansion and offer access to vasculature for long-term engraftment support. In our search to find an ideal transplantation site, we found the lymph node to be a good candidate. Lymph nodes, secondary lymphoid organs, can be viewed as mini-bioreactors for T cells after immune activation. They are also hijacked by cancer cells during metastatis. We speculate that lymph nodes also provide the necessary regulatory cues to normal cells and transplanted tissues. Indeed, by directly injecting the lymph node with embryonic kidney tissues, we demonstrated engraftment of the donor cells and subsequent organ function. While there is room for further improvement regarding a contiguous collecting duct epithelium to create a single path for urine, the degree of graft function observed in our study supports the lymph node as a site for kidney tissue engineering. With the rapid advancement in the human induced pluripotent stem cell (iPSC) field, enabling the induction of pluripotency in mature somatic cells by treatment with defined factors, the lymph node platform also holds great promise in the generation of replacement kidneys from a patients’ own cells. Our future work will therefore encompass an integrated tissue engineering approach that combines a scaffold-free lymph node-based system implanted with human stem/progenitor cells to regenerate a functional kidney.

Our study will offer a new approach for kidney disease treatment in a patient population with limited therapeutic options.