One of the many facets of cultural heritage studies is the identification of the possible sources of raw materials in ancient times.

Samples from Roman buildings dating back to I century B.C. – II century A.D. and located in the X Regio “Venetia et Histria” (now roughly corresponding to the north-eastern regions of Italy and the Croatia and Slovenia portions of the Istrian peninsula) have been analysed with regard to the provenance of the aggregate component of the mortar layers.

Detailed information on the Roman building art are found in the Vitruvius’ treatise De Architectura (I century B.C.). In book II, chapters 4 and 5,  the architect gives different recipes for the preparation of mortars: in the case of sand from quarries or gravel, the recommended proportion of the aggregate to lime is 3:1, while for sand from rivers or seashore the proportions should be 2:1. 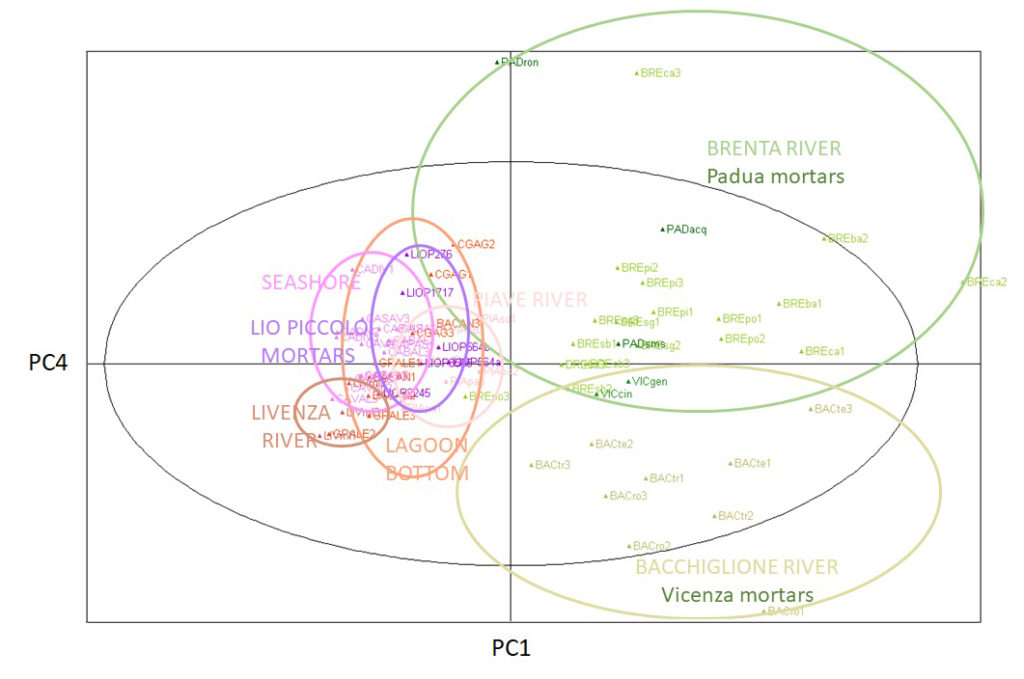 Fig. 1. PC4 vs PC1 Scores Plot of the natural samples and positioning in the diagram of the aggregate component of the mortars (the closer the representative points, the similar are the composition of the corresponding samples).

In this study, wall fragments from the semisubmerged ruins of a Domus (I-II century A.D.) found near Lio Piccolo (the Roman Litus Minor) in the Nothern Venetian lagoon were investigated, along with samples from a Domus in Vicenza (I century A.D.) and from three sites in Padua (Via Acquette and Via S. Martino e Solferino, I century B.C. – early I century A.D.; Roncaglia I century A.D.) for comparison sake.

Since Optical Microscopy observations of the aggregates recovered from the wall fragments showed rounded to well-rounded grain shapes, their provenance from quarries was excluded, leaving as potential sources for the sites located in the mainland the rivers flowing nearby, namely the Bacchiglione and the Brenta. As for the samples from Lio Piccolo, set in an environment that has since undegone dramatic changes due to both natural and antropic causes (from the river outlet diversions from the lagoon started in the sixteenth century by the Most Serene Republic of Venice to the modern controversial MOSE system), the identification of the sources is more challenging. The natural set examined in this exploratory investigation comprises samples from the lagoon bottom, the nearby seashore, and the main rivers known to have flown into the lagoon in Roman times (Piave, Livenza, and again Brenta).

The analysis started on the sand from the potential sources: the 63-420 micron fraction was studied through DRIFTS (Diffuse Reflection Infrared Fourier Transform Spectroscopy) to identify the main components present, and descriptive indexes obtained by band integration or spectral decomposition were calculated to evaluate the relative amount of carbonates to silicates (ICS index) or of dolomite to calcite in the carbonate component (ID index).

Appropriate spectral portions were then analysed by a chemometric tool (PCA, Principal Component Analysis) to highlight similarities and differences in new representative spaces (Scores Plots) obtained  taking into account the data variance. Once the best discriminating scores plots were identified, and their relationship to the different sand components verified also exploiting the computed descriptive indexes, the historic samples were added to the plots to compare their characteristics to those of the natural samples.

Whereas for the samples from the mainland the similarity to sand from the Bacchiglione river of the Vicenza ones and from the Brenta river of the Padua ones is confirmed, no firm result could be gained for the Lio Piccolo samples: when the analysis is based on silicates and carbonates taken as a whole, the Lio Piccolo samples result akin to natural samples from lagoon bottom, seashore and Piave and Livenza riverbeds, whereas when the difference in the content of dolomite and calcite is taken into account such similarities result less evident.

Where did Roman masons get their material from? A preliminary DRIFTS/PCA investigation on mortar aggregates from X Regio buildings in the Veneto area (NE Italy) and their potential sources.
De Lorenzi Pezzolo A, Colombi M, Mazzocchin GA
Environ Sci Pollut Res Int. 2018 Oct