Per- and polyfluoroalkyl substances (PFASs) have become an intractable, potentially endless chemical issue due to their historical episode in global market and lack of effective treatment method. Since PFOS and PFOA have been listed under the Stockholm Convention, a more realistic scenario is that short-chain homologues and functionalized perfluoropolyethers have emerged as feasible alternatives. Prenatal exposure to these PFASs via placental transfer is of great concern for neonates. They may affect reproductive outcomes and subsequently induce short or long-term chronic diseases. The perspective of an extended survey regarding associations between PFASs exposure and birth outcomes appears to be a sheer necessity in biomonitoring work. 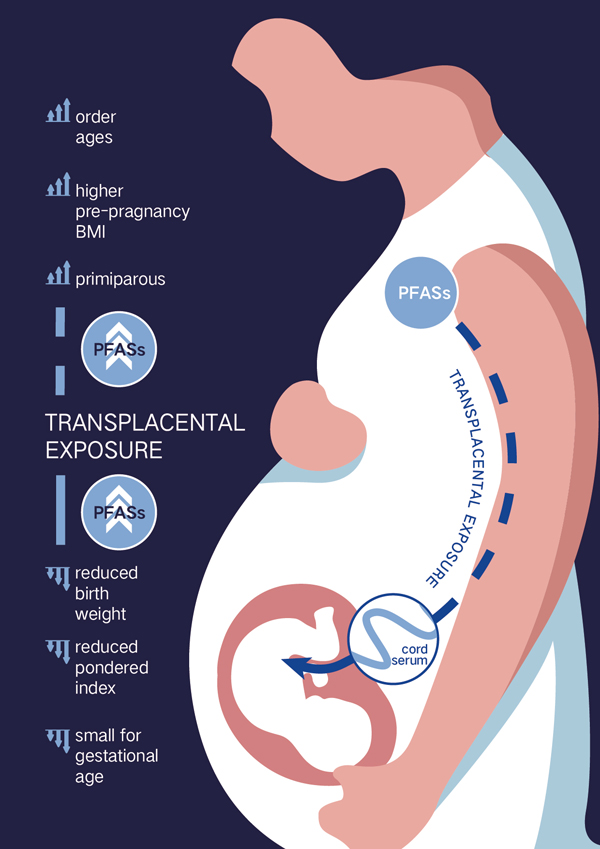 We concluded a cross-sectional study of 98 maternal-neonatal participants from Hangzhou, China between 2016 and 2017. Cord serum from personnel delivery was collect as biological matrix for detecting eleven PFASs, i.e. 6:2 Cl-PFESA, 8:2 Cl-PFESA, PFOS, PFHxS, PFDoA, PFUnDA, PFDA, PFNA, PFOA, PFHpA, and PFHxA. By using the Solid-phase extraction (SPE) coupled with UPLC-MS/MS system, all the target compounds have been found in cord serum. The highest median concentrations were given to PFOS, PFOA, and 6:2 Cl-PFESA of 4.07, 1.05 and 0.731 ng/mL, respectively. Univariate analysis indicated that older delivered ages and higher pre-pregnancy BMI were associated with higher cord PFASs concentrations. This may be attributable to the biopersistence nature and long elimination median half-lives of PFASs. Interestingly, being primiparous was also significantly associated with higher levels of 6:2 Cl-PFESA, PFOS, PFUnDA and PFOA than multiparous. Elimination by lactation and placental transfer related to lowering PFASs exposure. Delivery is one of the major routes for PFASs elimination. Notably, PFOS exposure was negatively associated with birth weight and ponderal index. Multivariable linear regressions indicated a unit increase in logarithmic PFOS was associated with a 417.3g decline in birth weight (β = -417.3, 95 % CI: -742.1, -92.4, p = 0.011) and a 0.005 g/cm3 decrease of ponderal index (β = -0.005, 95 % CI: -0.008, -0.002, p = 0.000). Additionally, binary logistic regression models suggested that each log-unit increase in the cord serum PFOS associated with higher odds of having a SGA-baby (OR = 4.138, 95 % CI: 1.072, 15.977, p = 0.039). PFHxS also exhibited higher odds of being SGA associated with logarithmic exposure (OR = 4.635, 95 % CI: 1.101, 19.511, p = 0.037).

Fig. 2. Box Chart of PFASs in cord serum and their associations with birth outcomes.

To sum up, the occurrence of PFASs in cord serum indicated that chemicals can pass through the placental barrier and reach the fetus. PFOS exhibited postnatal effects and developmental toxicity by interfering the glucose balance, thyroid hormone and lipid metabolism. We do not found any promising results of potential associations between F-53B exposure and birth outcomes. It leaves an open window whether 6:2/8:2 Cl-PFESAs themselves are indeed unable to interrupt newborns’ characteristics. In the future, mechanisms underlying the PFASs toxicities should be taken into consideration to better understand their potential reproductive effects.