Patients suffering from spinal cord injury and from neurodegenerative disorders such as Parkinson’s disease, amyotrophic lateral sclerosis (Lou Gehrig’s disease) and multiple sclerosis have high hopes for cell transplantation therapy. Successful transplantation depends on the donor cells becoming fully integrated into the recipient’s nerve tissue. However, survival and integration of transplanted cells is often poor and thought to be inhibited by scar tissue which is produced in response to nerve cell damage or loss, by cells called glial cells. Thus the glial scar is believed to be a major barrier to successful cell transplantation to the nervous system. Current practice is to deliver cells directly into the nerve tissue through a fine tube, with the idea being to place cells as close as possible to the site of nerve cell loss. This delivery method is called intra-neural cell transplantation (Fig. 1). 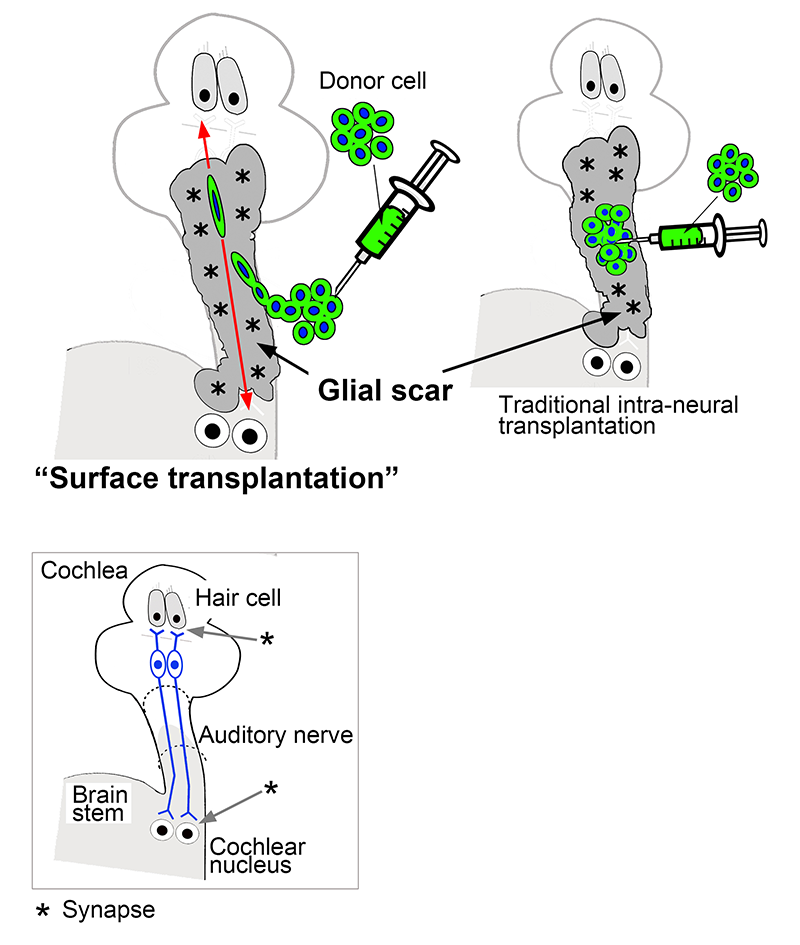 We developed a novel model for nerve damage in the auditory system and characterized the development of a glial scar to replicate the longer term processes of nerve damage in human patients. We then delivered cells into the auditory nerve by intra-neural transplantation. Brain responses to sound and connections between transplanted cells and nerve cells in the brain, as well as with the sensory hair cells in the inner ear, were measured before and after cell transplantation. The results were disappointing. Most of the cells died within several weeks and there was no sign of hearing recovery. However, we noticed that some cells that had spilled onto the surface of the glial scar appeared to have migrated into the nerve by themselves and survived. This chance observation led us to repeat the experiment but to change the delivery by leaving the glial scar intact and by placing the cells onto the surface. We called this method “surface transplantation” (Fig. 1). Many cells subsequently entered the nerve tissue, apparently recapitulating elements of their behavior during development. To our surprise they formed functional connections with auditory sensory cells in the ear and to the cells in the hindbrain. Restoration of responses to sound within the brain provided evidence that the auditory pathway had been reconnected. Our results provide hope for patients who might benefit from nerve cell transplantation. They show not only that the glial scar contains critical structural cues and chemical signals for nerve regeneration but also that cells can be transplanted with minimal further damage to the nerve tissue. This therapy could be used to maintain or regrow a healthy auditory nerve in people receiving cochlear implants, which work best when there is an intact auditory nerve to send signals from the implant to the brain. It’s also likely that the ultimate goal of restoring natural hearing will require that both hair cells and auditory nerve cells are regenerated, so this therapy could be of more use further down the line. Furthermore, this breakthrough could impact on patients with amyotrophic lateral sclerosis, for whom suitable donor cells may be applied to the surface of degenerated anterior roots of the spinal cord to restore lost motor function. Similarly, surface transplantation of appropriate motor neuron precursors may ameliorate neurological deficits due to poliomyelitis. Transplanted cells extended nerve processes deep in the brainstem, which means that the technique might be widely applicable, including treatment of nerve damage in deeper locations within the nervous system.