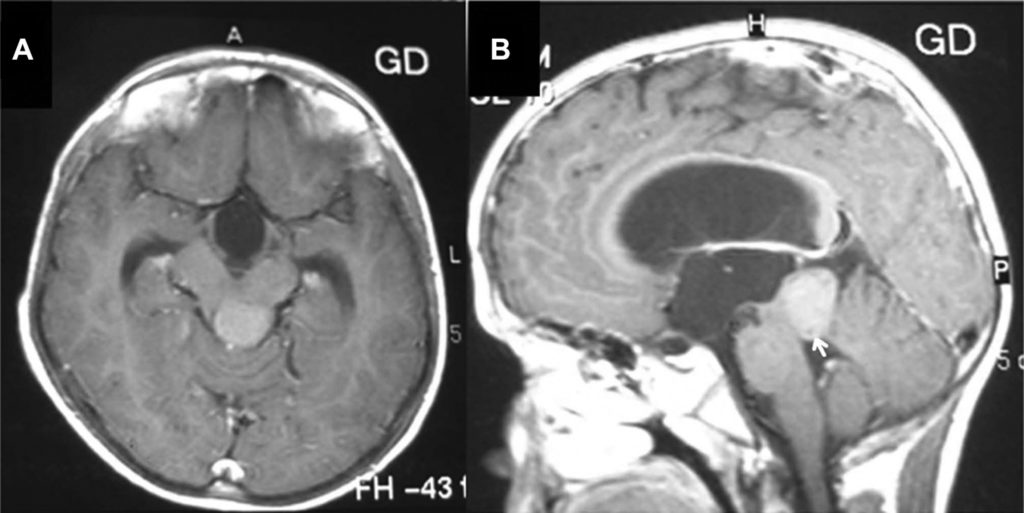 Fig. 1. The T1-weighted, contrast-enhanced brain magnetic resonance image of the patient in axial (A) and sagittal (B) views demonstrating a round lesion in inferior pineal region compressing the tectal plate, aqueduct, and pushed superior medullary velum down into the fourth ventricle (white arrow), causing mild hydrocephalus. The lesion is homogenously enhanced in favor of the trochlear nerve schwannoma.

A 12-year-old boy presented to our center with occipital headache, diplopia in downward gaze, and abnormal gait for the past 2 months. The patient had no past medical history and comorbidity including neurofibromatosis. A detailed neurologic examination revealed bilateral papilledema, bilateral trochlear nerve paresis, and truncal ataxia. Visual acuity and other cranial nerves were normal. Cerebellar tests were all normal except for the heel-to-shin test (bilaterally impaired). There was no skin lesion or café-au-lait spot. The patient underwent a nonenhanced computed tomography of the brain revealing a midline, 2-cm, round, hyperdense lesion in the inferior pineal region with dilated ventricles (moderate hydrocephalus). Brain magnetic resonance imaging (MRI) revealed the same lesion, located in the inferior pineal region, presumably in the quadrigeminal cistern, exerting pressure anteriorly over the tectal plate and posteriorly over the cerebellum, probably the lingula of the vermis, and superior cerebellar peduncles with homogeneous enhancement with gadolinium injection (Fig. 1). The lesion had a pressure effect over the superior medullary velum extending into the fourth ventricle. The patient was scheduled for elective surgery on the basis of a diagnosis of the inferior pineal region tumor extending to the roof of the fourth ventricle. We presumed that the tumor could be reached through the fourth ventricle. After performing a classic midline suboccipital craniectomy, the dura mater was opened in a Y-shaped manner. Next, the fourth ventricle was entered (transventricular approach). The tumor bulge was apparent above the superior medullary velum, dorsal to the quadrigeminal plate, squeezing the aqueductal foramen. An incision was made on the superior medullary velum, and the lesion was exposed (transvelar approach). It had a permissible consistency adhering to the tectal plate while having an arachnoid plane. The tumor was dissected microscopically from the surrounding structures and was removed through the superior medullary velum into the fourth ventricle (Fig. 2). It originated from the proximal part of the trochlear nerve compressing both nerves and the tectal plate. The tumor was totally excised, leaving no residues behind. Cerebrospinal fluid flow was maintained through the cerebral aqueduct. 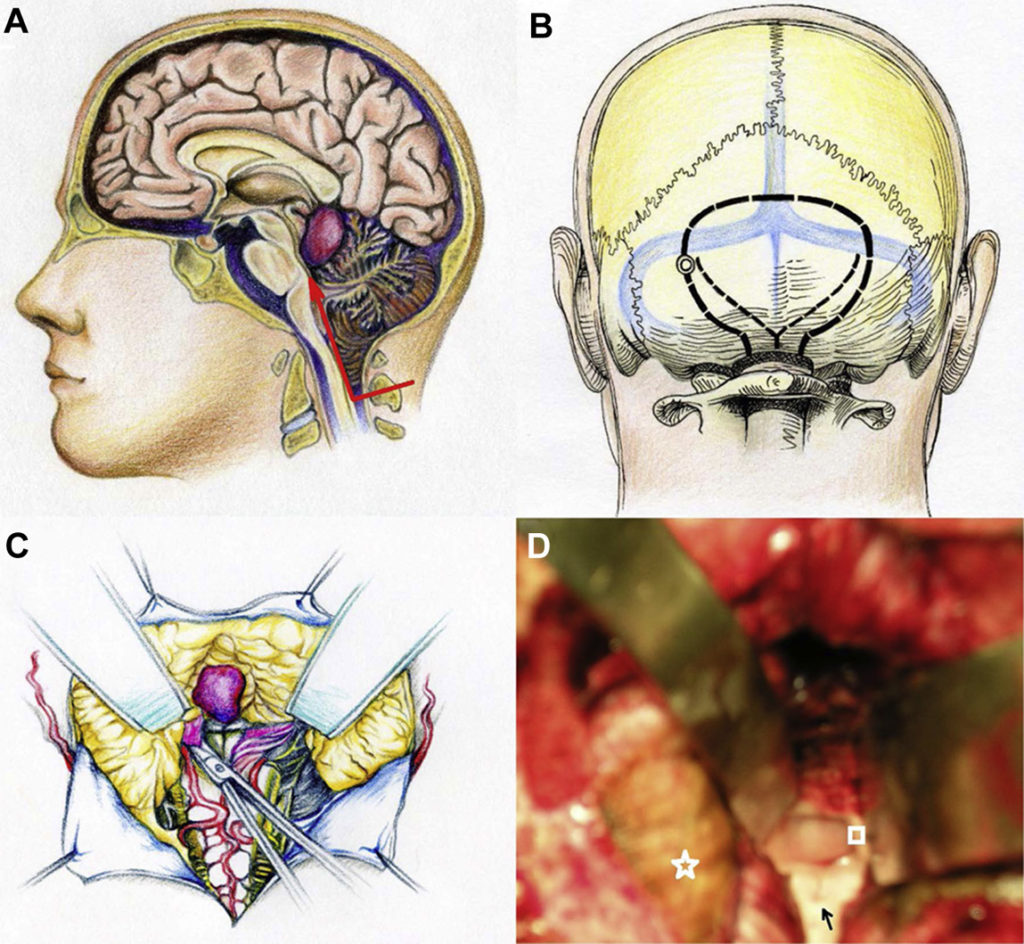 The patient had an uneventful postoperative course. The patient had no new neurologic deficit. Early postoperative brain MRI showed that the lesion was completely resected with no mass effect on surrounding structures. In a 12-year follow-up period, the patient had no symptom that affected normal living and his brain MRI revealed that there was no recurrence or remnant staining with S100 protein antibody showed diffuse staining of both spindle and nonspindle cells. These all showed trochlear nerve schwannoma. The headache, diplopia, and ataxia resolved completely during the 1-month of follow-up. However, the patient developed symptomatic hydrocephalus at 2 months after the operation, for which a ventriculoperitoneal shunt was inserted. Currently, he is a theater player and an artist with normal eye movements. The patient gave his written consent for the publication of his disease course and history, as well as his images.

In conclusion, the transventricular transvelar approach could be safe and feasible to treat the lesion of the lower pineal region compressing the superior medullary velum. This approach should be individualized on the basis of the patients and tumor characteristics.