Metals are essential in many life processes and, as such, all organisms including our body have developed mechanisms for their uptake and tight regulation to achieve a normal functioning. Failure of these mechanisms is reflected in the misbalance of some metal ions that is featured by numerous human diseases. For example, iron and copper are essential to neuronal function but excess or deficiency of either has been related to the emergence of several commonly known neurodegenerative disorders.

According to this observation, scientists are nowadays pursuing two main approaches to tackle the treatment of neurological diseases that have been related to a metal’s misbalance in the central nervous system; one, by targeting the regulatory mechanisms of these metals ions, and two, by directly carry those metal ions from regions where abnormally high (and usually damaging) concentrations are encountered into metal-deficient regions, in order to restore their normal functioning. 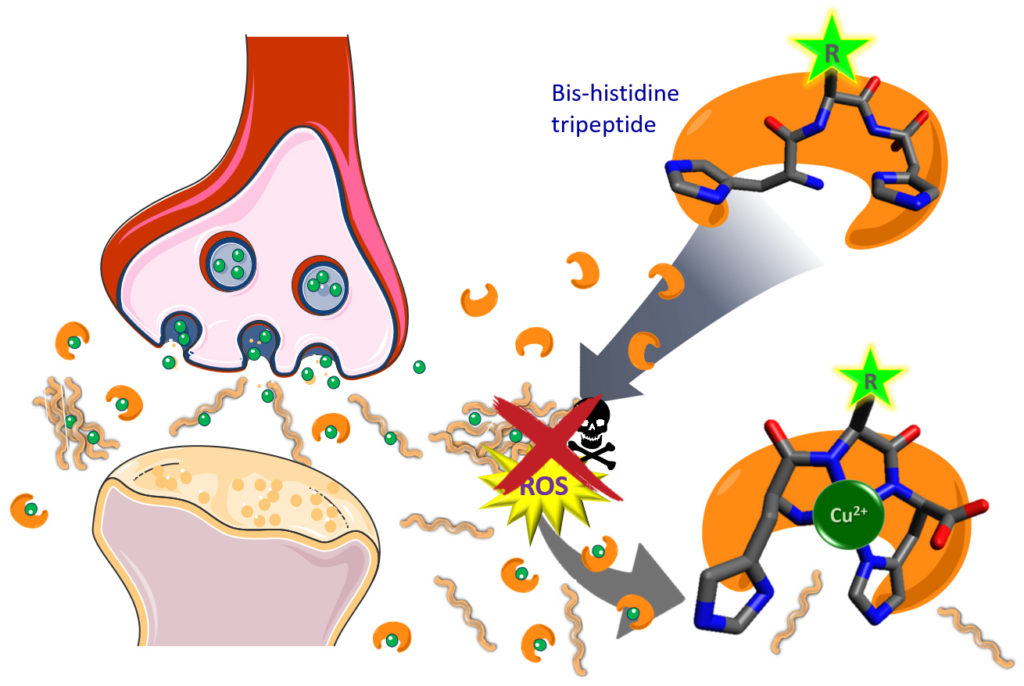 Fig. 1. In the synaptic cleft, where a higher concentration of copper ions can be reached, histidinic peptides capture them tightly and prevent the interaction of this metal with amyloid peptides that form toxic aggregates and the overproduction of highly oxidant species (ROS).

Recent research points to copper as one of the key agents in the progression of Alzheimer disease; this metal seems to be involved in the formation of toxic beta-amyloid plaques and in the overoxidation and degradation of the neuronal tissues, which ultimately leads to neuron dysfunction and death. We aim to develop molecular “copper shuttles” to capture copper(II) ions in those regions of the brain where their excess is detrimental, and return them into the neurons, which suffer a deficiency of this metal.

In that context, we have shown how small copper binders effectively reduced copper toxicity by hindering the production of highly oxidative species while preventing the formation of toxic amyloid aggregates (oligomers). These metal binding molecules consist of small peptides; peptides are biomolecules of which proteins are made, that is, the “bricks” of our body. The described copper binders bear two histidines in their sequence (histidines are excellent anchoring sites for copper), and they are based not only on the role of the serum albumin proteins as safe metal carriers of copper and zinc, but also on the detoxifying function of these proteins as tight binders (or scavengers) of harmful metals like nickel and cadmium. In fact, the studied oligopeptidic copper binders mimic the copper-albumin interaction.

Histidine-rich oligopeptides not only possess a far simpler molecular structure than albumins, do but also may present further advantages such as a better tissue penetrability due to their smaller size, and tunable properties, as fluorescent fragments can be appended for in vivo applications. The affinity of these peptides towards the targeted copper ions is higher than that shown by amyloid-beta peptides (the precursors of the toxic amyloid aggregates), and the binding of copper is irreversible even in the presence of an excess of amyloids. This important feature prevents copper-induced amyloid aggregation and the overproduction of highly damaging radical oxygen species, by blocking the reduction of copper(II) to copper(I). Most importantly, such affinity would not be high enough to compete and interfere with other copper-binding enzymes and transporters that are playing a physiological role.

In conclusion, we have shown that small histidine-rich molecules are promising motifs for the future development of efficient “copper shuttles” that would be able to restore the balance of this metal in the brain. This is a small but meaningful step in the intense and deep research that is underway within the scientific community, aimed at developing molecular approaches targeting the dysregulation of copper and other metals in patients who suffer Alzheimer’s disease.

Ana B. Caballero and Patrick Gamez
Department of Inorganic and Organic Chemistry,
University of Barcelona, Spain