Critical limb ischemia (CLI) is a severe form of peripheral artery disease, and associated with high rate of morbidity and mortality. The current standard for treatment CLI is revascularization. However, in any time surgical or endovascular revascularization in CLI patients are not suited. Stem cells-based angiogenic therapy may be a chance to improve blood supply in CLI patents. Before application in humans, therapeutic angiogenesis must be tested in animals. 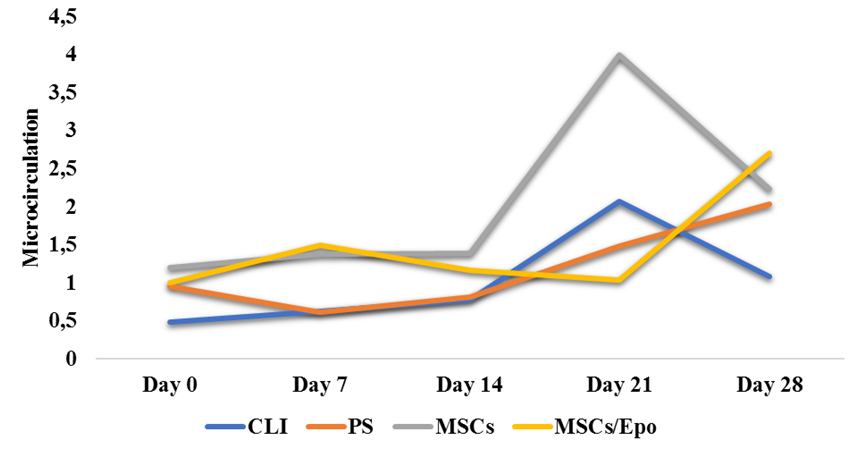 Bone marrow mesenchymal stem cells (MSCs) are multipotent non-hematopoietic stem cells, easily expanded in vitro, produced bioactive factors for immunomodulation and angiogenesis, which can promote tissue repair and regeneration. It was shown that bone marrow mononuclear cells administration in animal model of CLI promoted recovery of muscles function and stimulated angiogenesis. Erythropoietin (Epo), cytokine that controls erythropoiesis, also appears to have pleiotropic effects, such as an anti-ischemic and anti-apoptotic properties, promotion of neovascularization, mobilization of endothelial progenitor cells, and enhancement of angiogenesis and cells survival under hypoxic conditions.

Animal model of CLI has been developed by the ligation and resection of the femoral arteria in animal. MSCs was isolated from bone marrow and expanded to 4-th passage, which expressed CD73, CD90 and CD105 and was negative for CD34 and CD45, also able differentiate into osteoblasts and adipocytes in vitro. We studied the effectiveness of MSCs alone or in combination with erythropoietin, administered as a single injected into calf muscle, for the treatment of experimental CLI in Wistar rats. Assessment of therapeutic angiogenic potential was based on an examination of flow measurement and functional assessment of perfusion by laser Doppler in limb, and by levels of cytokines in serum and calf muscle use ELISA.   After induction of CLI (Day 0), rats were allocated to one of 4 treatment groups and received treatment based on allocation on Day 1. These treatment groups were: single dose of intramuscular MSCs (250,000 cells in 0.2 ml per site, n=5), MSCs plus erythropoietin (MSCs/Epo, 250,000 cells plus 6.68 IU of erythropoietin in 0.2 ml per site, n=5), physiological saline (PS, 0.2 mL per site, n=5) and no treatment (control).

Ligation of the femoral artery led to a significant decrease in microcirculation (MI) in the foot. So, 24 hours after artery ligation in control group MI in the foot was 10% of the initial level, in PS, MSCs and MSCs/Epo groups was 30-50% of the initial level. Wistar rats that received a single intramuscular injection of MSCs or MSCs plus erythropoietin had significantly higher parameters of microcirculation in limb than PS and untreated rats (Fig. 1). Stimulation of angiogenesis in CLI against the background of MSCs in combination with Epo or without it was seen from the levels of cytokines and growth factors involved in the initiation of inflammation and repair of ischemic tissues and organs.  In animal received MSCs or MSCs/Epo observed a lower serum levels of pro-inflammatory cytokine, while high level of pro-inflammatory cytokine in calf muscle on Day 28 after induction of CLI (p<0.05). Our data demonstrates that a single injection of MSCs alone or in combination with erythropoietin into calf muscle was effective for the treatment of experimental critical limb ischemia and provided sustained angiogenic action.