When heart valves or small blood vessels fail, surgically implanting a replacement can be a life-saving operation. Right now, replacement blood vessels are harvested from the patient’s leg or chest, which is an additional invasive procedure. Heart valves can be replaced with a number of non-living materials, but none of these will grow along with the patient. This is a particular disadvantage for children receiving new heart valves, since their hearts will grow in size while the new heart valve will have to be replaced to keep up. Ideally, an implanted graft will be a living, growing structure that adapts itself during the patient’s life. After implanting a blood vessel or a heart valve the new structures will be directly exposed to blood as it flows through. Blood is filled with a number of cell types that are capable of repairing and rebuilding damaged tissues. It would be beneficial if the material of a replacement graft could attract those same cells and could ‘trick’ the body into a repair process that will lead to the development of a new, living tissue. In order to achieve this we looked at the way damaged areas in the body, such as an infarcted heart muscle, give off a signal to blood cells to attract and stimulate them. Such a signal is usually a protein that is expelled by damaged cells which then attaches itself to the surroundings of the cells, creating a field of proteins that are attractive for blood cells. One of the most potent proteins that is capable of this is called stromal cell derived factor 1a (SDF1a). This protein works by attaching itself, on one end, to fibers such as collagens surrounding the cells. The other end of the protein sticks up into the space where blood cells flow and roll by. Receptors on the surface of the cells can easily roll over the presented SDF1a protein and, in response, will anchor themselves firmly. They will then crawl along the presented SDF1a proteins towards the highest concentration and start the process of repair. 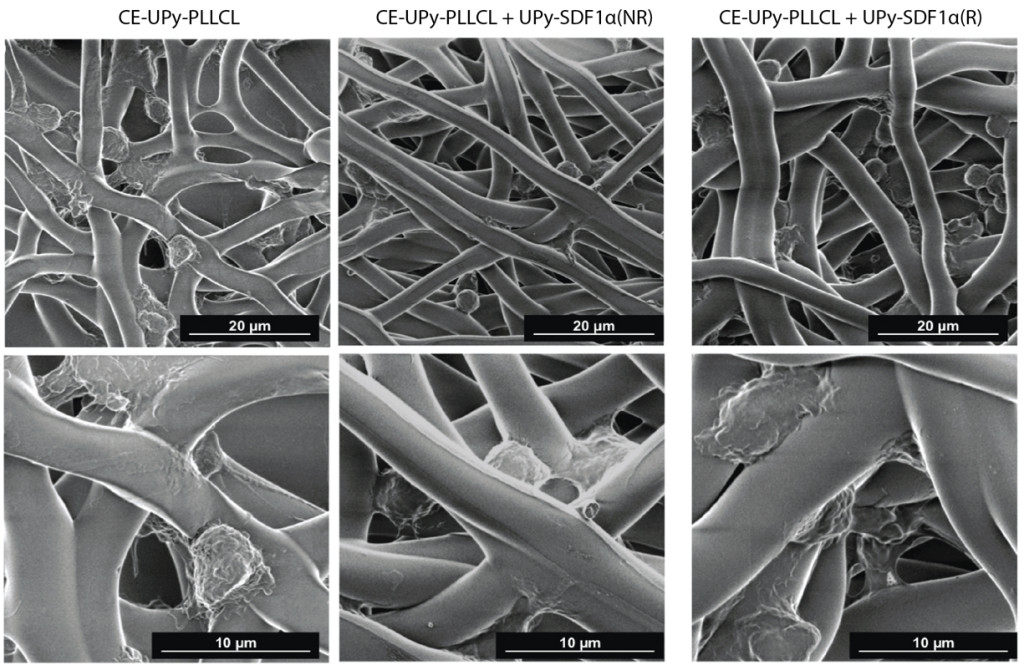 We took the part of the SDF1a protein that binds and activates the cells and incorporated that part into the fibers of a completely synthetic material. This material was built by shooting a liquid fiber of a bioplastic towards a collector plate, which is a technique that resembles a cotton-candy machine. This technique is called electrospinning. The result is a meshwork that looks like a network of fibers under the microscope (Figure 1). Coated all along these fibers are our SDF1a fragments. We made tubes out of this material and tested its ability to attract and stimulate blood cells. We tested human blood cells in a bioreactor, a machine that simulated a pulsatile blood flow, and by implanting tubes in rats to see how a living circulatory system would influence the development of the material. We found that cells invaded and spread all through the tube material, and showed signs of reducing their inflammatory response. Materials with SDF1a fragments contained more cells than materials without them. The advantage of our material is that it is fully synthetic, meaning it is easily produced in larger quantities and easier for a surgeon to take out of a package and implant. Grafts like these will develop into living tissues made of the patient’s own cells and will never be rejected. However, before we can use these materials in humans, more research is needed to see how the grafts do in longer implantation times and in larger animal models such as pigs or sheep.