In the microbic world of about 3.5 billion years ago, unicellular eukaryotes (organisms with cell nuclei) started to form a symbiosis with prokaryotes (organisms without cell nuclei). These prokaryotes were bacteria that could breath oxygen, whereas the microbic eukaryotes of that time could not. The symbiosis was so effective that the bacteria in question now live inside the cell-bodies of eukaryotes, a phenomenon called endosymbiosis. 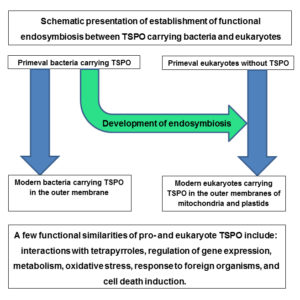 Fig. 1. This scheme very concisely summarizes evolutionary relations between bacteria and eukaryotes regarding the presence of TSPO in these life forms, as well as the associated functions.

These endosymbiotic bacteria have evolved to intracellular organelles, named mitochondria and plastids, inside the cell-bodies of present-day eukaryotes (mitochondria in animals and plants, plastids only in plants). From what we know now, one bacterial protein may have been very important for the success of this endosymbiosis, including its persistence over these billions of years. This protein is Tryptophan-rich Sensory Protein for Oxygen, its mammalian homolog being named mitochondrial translocator protein (TSPO). It enables the bacteria in question to switch between anaerobic and aerobic metabolism. For eukaryotes, this symbiosis was so important that today there are no eukaryotes alive without this symbiosis. In eukaryotes, TSPO’s primary function appears to be to allow transport of various molecules over the mitochondrial membranes. Multicellular organisms can present numerous mitochondria per cell. Human liver cells contain about 1000–2000 mitochondria per cell, making up 1/5 of the cell volume. The only eukaryote known to lack mitochondria is the microbe Monocercomonoides (which parasitically lives in the gut of another eukaryote, the chinchilla).

One can ask the question, “How come that the original microbes and bacteria of this symbiosis did not kill each other, in this primeval world of microbe eats microbe ?”  Interestingly, endogenous tetrapyrroles that can act as ligands for TSPO, may be part of the answer. For illustration, well known tetrapyrroles are hemoglobin and chlorophyl, life essential molecules in eukaryotes. One of TSPO’s functions is initiation of programmed cell death. This can include modifying the gene expression of the host cell, reprogramming them to induce programmed cell death, finally including breaking up the chromosomes in the cell nucleus and compartmentalizing the cell into small digestible packages. On the other hand, over-activation of TSPO kills the bacteria and mitochondria carrying them. Furthermore, TSPO regulates migration, differentiation, and adhesion, even in addition to regulation of metabolism.  Tetrapyrroles can regulate these functions by binding to TSPO. Vice versa, TSPO can transport tetrapyrroles in and out of mitochondria, and partake in their metabolism. Apparently, 3.5 billion years ago, for some reason, the tetrapyrroles in question did not prevent the bacteria to attach to them, but at the same time also prevented the bacteria from killing them.  Once the bacteria were inside, tetrapyrroles possibly also prevented the death of the bacteria and their disintegration and digestion and at the same time prevented the bacteria from killing the penetrated cell. Today, these ongoing effects of tetrapyrroles interacting with TSPO are considered “maintaining homeostasis of the organism and the cell”. This baffling multifunctionality of the TSPO including its interactions with tetrapyrroles, coined the phrase “the enigma of TSPO function”.

Fig. 2. By binding to TSPO, tetrapyrroles and synthetic ligands modulate mitochondrial and plastid functions, consequently regulating the various general functions listed at the right hand side of the figure.

To solve the associated questions, numerous synthetic TSPO ligands were designed, generally based on the tricyclic structure of ligands binding to the GABA-A benzodiazepine binding site. Actually that was how TSPO was discovered, serendipitously, the benzodiazepine diazepam was found to bind to an unknown protein present also outside the brain. Hence TSPO’s early name was peripheral benzodiazepine receptor. Now we are starting to understand that synthetic ligands of today bind to other sites on the TSPO than the tetrapyrroles do, and we continue our path to gain insights into the Enigma of TSPO Function. Hopefully, this will lead to novel treatments for various diseases.