As we all know, DNA is the matrix for the proteins and the proteins are the molecules which are involved in every step of the metabolism of all living organisms inside and outside of cells. Without proteins any life would exist. 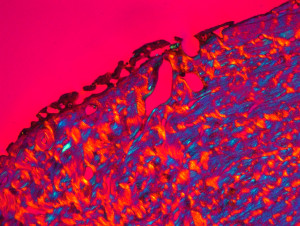 Thin ground section viewed in polarized light. External compact bone substance of the right femur of a Scythian warrior from Siberia (Russia), 7th century BC. Evidence of osteoblastic reaction at the periosteal level due to tuberculosis. Magnification 25x.

A characteristic feature of bone which differentiates it from other supporting connective tissues is the mineralized extracellular matrix (ECM) outside of the cells (ECM are 90% of bone).The ECM consists of 70% inorganic and about 20% organic molecules and important only about 5-10% water, a cell contains 70% water. The main protein of ECM is collagen (about 90%). The inorganic part contains mainly calcium phosphates comparable to hydroxyapatite. Non-collagenous proteins (NCP) can bind very intensively to collagen and or to hydroxyapatite and if the bone is well preserved, the NCPs are also present after death in the same place as in life time. The water content is low and also by the depressed amount of degradation enzymes, this conditions being favourable for the preservation of bone proteins.

A new discipline has started to develop in the field of paleopathology, called paleoproteomic. In investigating ECM-proteins, there is almost no contamination risk such as in aDNA because, as a rule, this proteins are bound very tightly to the hydroxyapatite scaffold as in living organism. A great challenge in paleoproteomic is the identification of ECM-proteins of the normal bone metabolism and also of proteins which are typical of diseases. Principally, there are two different approaches:

1) Investigation on disease-specific proteins built by bone cells (e.g., alkaline phosphatase) or by cells of other organs of the infected individual, for example prostate specific antigen (PSA) which is transported by the bloodstream to the bone ECM.

Example: We could identify PSA in the human bone of a Scythian king who lived 700 BC. Additionally to the characteristic morphological changes diagnosed by microscopy, we detected the protein PSA in the bone tissue of this individual. Thus, this is up to now the oldest example of prostate cancer which was diagnosed using morphological and biochemical techniques.

2) Investigation on proteins produced by pathogenic organisms (e.g., bacteria). If an individual is infected by Mycobacterium tuberculosis (MT), MT invades the host macrophages and secrets protein molecules, for instance, the protein antigen 85 (Ag 85). The secreted molecules trigger a cascade of immune mechanisms. Most bacteria are controlled by this host response. It is typical of MT that a fraction is sustained in this antimicrobial environment to be reactivated at a later point of time. When the infection has established, a high amount of protein Ag 85 is built and secreted by the MT. By blood circulation, Ag 85 is also transported to the bones. Thus, if a human individual who lived hundreds or thousands of years ago had suffered from tuberculosis, the MT level had increased and the bacteria secreted the protein Ag 85. This bacterial protein was transported to the bone and bound to the hydroxyapatite and /or the bone collagen during lifetime.

Example: We have looked for the protein Ag 85 in two different ancient human individuals. Case one: 22-24 year-old male excavated from Kurgan 2 of Arzhan (southern Siberia, Russia), 7th century BC. Case two: 45-59 year-old male excavated from burial G 19 from the archaeological site of Kirchberg (Hesse, central Germany), 10th -12th century AD. In both individuals, the protein Ag 85 has been identified in a high amount. As a control, we identified the protein Ag 85 in an adult female from the Pathology Collection of the Medical Faculty of the University of Göttingen which dates from the late 19th to the early 20th century AD, with the known clinical diagnosis of TB. The paleoproteomic and the morphological results carried out by microscopy using thin-ground sections provide a reliable diagnosis in the two ancient cases: both individuals suffered from TB.