Tunicates : Can the study of obscure marine animals shed light on evolution?

Scientists agree that the current biological diversity on earth is the result of evolution: present life forms evolved from their ancestors by progressive modifications. The shape and behavior of an animal or a plant – what scientists call its “phenotype”- are the result of the interaction between its genes and its natural environment. Within a species, there is a diversity of phenotypes. For instance, some individuals are smaller, others bigger. When environmental conditions change, some individuals may be better adapted to the new situation. They will thrive, leaving a larger progeny than less adapted individuals. This process of natural selection will slowly bias the features of this species, and may lead to the emergence of a new one. 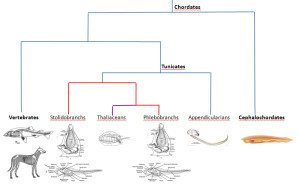 Fig. 1. Family tree of chordates. Representative examples of adult organisms are shown, excepted for ascidian phlebobranchs and stolidobranchs were the larva is also represented. Ascidian branches are represented in red and thaliacean in purple.

All species do not evolve at the same rate. Looking at fossils teaches us that the morphology of some species evolves very slowly, as illustrated by so-called “living fossils”, such as the coelacanth. Why such species evolve so slowly remains unclear. Is it because their genes are also evolving slowly? Or are there some other hidden constraints?

Tunicates are particularly appropriate to address some of these questions. These marine invertebrates are composed of three main groups (Fig. 1). The ascidians (phlebobranchs and stolidobranchs) constitute the largest group in terms of number of species and live attached to rocks. The appendicularians and the thaliaceans, by contrast, float freely across the oceans, carried by the currents. At the adult stage (Fig. 2), these animals look very different from us. Yet, the embryos of most tunicates are surprisingly similar to those of the vertebrates, and form little tadpoles (Fig. 1). Tunicates are therefore considered close relatives of the vertebrates.

The embryonic development of ascidians is best known. They are easily collected from the shores and produce many embryos, which develop rapidly outside of their mother and can thus be easily experimentally manipulated. Remarkably, the embryos of ascidian species as distantly related as man and fish are so exquisitely similar that one can identify the exact equivalent for nearly all cells of these embryos. The DNA sequence of all the genes of several species – their genome – have been determined. Unexpectedly, the genomes of different ascidian species can be very divergent. Ascidians are thus slow evolvers at the morphological level, but very fast evolvers at the level of their genome ! 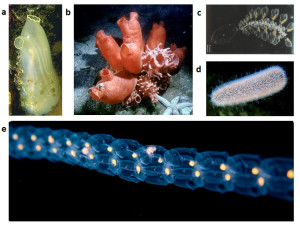 Much less is known about thaliaceans than about ascidians. These animals are difficult to collect, and produce much fewer embryos, which have accordingly been less studied. What we known about their embryos, however, indicates that they develop very differently from those of ascidians, and also very differently between thaliacean species. Some thaliaceans, the doliolids, develop into small tadpoles in the open sea, but the salps develop directly inside the mother, fed by a placenta, and skip the tadpole stage (see figure 2 for examples of adults of the different subgroups). From what we know, it is unlikely that functionally equivalent individual cells can be found in thaliacean and ascidian embryos. Thaliacean and ascidian genes are very different, but the comparison of their sequences, however, reveals that all thaliaceans originated from an ascidian-like ancestor (Fig. 1). Thus, in the course of evolution, thaliaceans strongly deviated from their ancestors both in terms morphology and genome sequence, perhaps as an adaptation to their free-floating mode of life.

Tunicates thus offer many apparent paradoxes for evolutionary biologists. How can ascidians develop nearly indistinguishable embryos with such different genomes? And what drove the spectacular diversification in thaliaceans? Modern microscopy techniques and large-scale genome sequencing approaches will hopefuly allow rapid progress in understanding how these intriguing animals adapt to their environment.